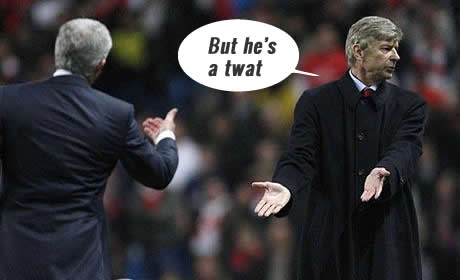 As Arsenal prepare to face QPR today, Arsene Wenger comes face to face with Mark Hughes, a man with whom he’s had more than one run-in with in the past.

When managing Man City – before they sacked him, of course – Hughes spent an entire game shouting abuse at Wenger who then refused to shake his hand as is customary after the game. Hughes complained and made a big issue out of it, Wenger simply made reference to the fact that he can shake hands with who he wants.

It’s one of the most ludicrously over-stated customs in English football, as if not shaking hands with somebody is one of the worst things you can do in the game, but I’d always have more respect for somebody who was true to their own principles enough not to shake hands.

So I’m on Wenger’s side. The same way as when he falls out with O’Neill or Allardyce or Ferguson or Mourinho or Dalglish or … well, you get the picture. Still, the boss jokes that perhaps the common denominator in all this is him, making reference to today’s meet-up.

“We have a rivalry. But in fact I discover I have this kind of rivalry with many managers,” he said. “Maybe it’s me, that’s exactly the conclusion I have come to!

“I respect every manager because I know they all suffer. That’s part of the job. He was a passionate player, he didn’t give anything away and that comes across in his management.”

“We know QPR are a side with quality players and are in a difficult situation,” he said. “I expect them to fight not to go down.

“However the key will be on our side, no matter what QPR’s quality or problem is. It will be important for us to go out and show how much we want another win.”

And here’s to hoping Hughes is too sickened to even think about a handshake at the end.

Everyone Wenger doesn’t like he should shake their hand with one of those shock things just to let them know there a bellend!

I hope they are badly set out for a flogging today. They cant even figure out the alphabets….its PQR damn it!

I am expecting a difficult game today. Hughes will have told his players to be very physical and try to antagonise Arsenal players as much as possible. Barton has managed to get three Arsenal players Diaby, Gervinho and Song (although Song put his studs into Barton) sent off. As everyone is aware, due to Barton’s aggressive behaviour this cost us a 4-0 lead at Newcastle. Therefore, the Arsenal players have to show tremendous self control, as the provocation will be coming from all their players, thick and fast. Unfortunately, we have Mike Dean referreeing today, and he is known for… Read more »

Song put his studs in Barton?
Where the fuck is his Giant £1,000,000 Cheque and complimentary bottle of champagne?

@ Jordan Gooner: Reading this after the name but have congratulate you for getting your comments spot on..

* after the game…(shouldn’t try to type in the dark)

We r helping them to go deep into relegation

Mark Hughes is a cunt and if he abuses Wenger today too, then Wenger should just fucking punch him in the face instead of a handshake. Clearly it won’t be more than a 3 match touchline ban and a fine , would it? At least this time it will be for a justified cause.

Er… Song putting his studs in barton’s flesh was in the 0-0 vs newcastle this season, right? Not the 4-4?

Here’s hoping we absolutely obliterate QPR today and while the Gerv trolls Joey ‘Eat Shit” Burton on the pitch, Arsene can make the ultimate trollface for that Hughes bloke.

This will be an easy win for us….Hughes has the tactical brain of a peanut. Anyone with a ‘soft spot’ for QPR now hates them to the core because of the cretin Hughes. Manc scum.

Chinmay, thats correct, my point is when Barton plays against Arsenal he knows how to get at Arsenal. Barton also had a confrontation with Nasri, a few seasons a go. If you go back to the 4-4 draw, it was clear Alan Pardue, sent Barton out to antangonize our players, it worked we had a player sent off. Hughes will play the same tactics. Arsenal have to be aware of there over aggression !!

Wenger should go for the old ‘here’s my hand, whoops, now I’ve got my thumb on the tip of my nose and am wiggling my fingers. At you, Ailsa’

ARSENE WENGER… I LOVE YOU.
“Maybe it’s me?” PRICELESS.
Hughes, you and your team are shite.
3-1 to the GUNNERS today

I would love to see Wenger just point and laugh at Hughes when he’s yelling at the ref or his players. Then when Hughes is yelling at him, just point to the scoreboard and laugh.

Let us at the end of the season have the right to say, “we knocked the illiterate cunt right back to the championship ” COYG

A bit off topic is the Coq back? Sky sports info thing said he could feature..I’m sure wenger said he was four weeks away and on the offical site its got him still out

I think him and Diaby are both “close to fitness” I wouldnt expect to see either of them in the next couple of game though.

Nothing would please me more than to see two of the biggest cunts in the game in Hughes and Barton slip into the championship. If only Stoke would go with them.

I hope Wenger doesn’t get banned for 3 games and fined £30,000 for refusing to shake Mark ‘Cunt’ Hughes hand

yes, wenger!! it’s fucking you! are you kidding me??!! why did u play ram-fucking-sey!!?? you are asking your player to be serious but you are not!

no commitment, no desire and a terrible decision to play a 4-5-1 with ramsey as a midfielder we left robin with no supply line and gibbs basically had to operate as a makeshift winger the whole game and left the back four, or three i should say very vulnerable, i really think we should have stuck with gervinho or aoc and gone with a 4-3-3 but then again with the lack of determination the players showed the scoreline probably would have stayed the same, ahh cant be dropping easy points now….but its okay now we just have to regroup and… Read more »

How can you possibly forget Pardew?!