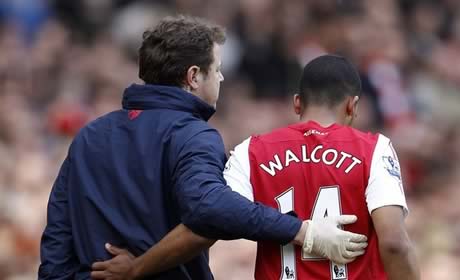 Arsene Wenger says it’s unlikely that Theo Walcott will feature again for Arsenal this season having limped off during the 0-0 draw with Chelsea due to a hamstring problem.

Having gone down initially, he said he was ok play on and then caused himself further damage when in possession down the right hand side.

Speaking at his post-game press conference, the boss said, “It looks like a serious hamstring. First we assessed the hamstring, he wanted to go on and stay on the pitch, and I think he should have gone off straight away because the second time it was a real hamstring.

“I think now for him it will be tough to come back before the end of the season. It is usually 21 days. He should be OK to play for England – he just will have a good rest. You suddenly become favourite to win the European Championship! But I don’t think he will be ready to play for us.”

And despite Robin van Persie’s unusually poor finishing the manager was full of praise for his captain.

“He played his 50th game mtoday and he gave absolutely everything again today. He was unlucky in the first half, he had a free kick he deflected and it was a clear-cut chance.

“Then when he was through I think he rushed his decision making a bit, when he took it with his right foot, because he had Diaby coming in completely on his own.

“It was not easy for him because he was completely on his own at some stages with not enough support. And he was caught offside one time and I am not sure he was.”

The point leaves Arsenal 6 clear of Sp*rs and with a better goal difference, but after the Wigan defeat, the manager is unequivocal about what’s needed in the final three games of the season.

“What it means is that we have to win the rest of our games and we have to look at the results over the weekend as well.”

Are we gonna see headlines like that starting from tomorrow – “Has this Arsenal star played his last game for the club” :))

No Walcott? No Arteta? It is time for the Coq to rise!!

I wouldnt mind the coq upfront he is more skillful. He certainly knows how to find the gap when the cunts have parked the bus.

so much wrong with this statement. but somehow so right.

We definately would miss his quality along with Arteta’s but Gervinho really needs to up his game like Walcott has done in recent weeks. Nigerian gunners blog returns on Monday.

Really hope our usual end of season collapse hasn’t just been delaying itself till now. Walcott and Arteta gone in one week with 2 bad results, I thought wigan game was really bad luck for us on their goals but we never get good luck n e v e r. This shit is very upsetting, i’m not a religious man but can somebody please convince god to make us win the last 3 games because I really don’t see us doing it otherwise

A welcomed break, set up well for ‘coq’ to rise up and take his place. Were heading into a rugby match so i’d take coq over walcott anyday.

No better time to play oxlade coquelin. Its now arsene or never.

I wish Arsene had said “will he play for England? I don’t care. He can play again when he’s ready.”

This could b the chance for Gervihno and the Ox to find form and cement a place in the side respectively. I think we’ll pull through and win 3rd place (win 3rd place? That so doesn’t sound right)

I agree on the Ox, think that Gervinho is still knackered from the ACON though, looking forward to seeing what he can do next year but think the boss will go with Ox/ Benayoun for the last few games

Theo should have known to stay off after the twang, he should’ve known better.

Whether TH14 wanted to stay on or not, there is enough management experience around him to know that he should have been withdrawn straight away. Players don’t magically recover from a hamstring twinge during a game. It was poor management to leave him on and there was only going to be one outcome and that is a more serious injury. Once again Arsene needed to make an on the spot decision & he got it wrong.

Only the player knows how he feels, its his resposibility to tell the management how bad a twinge might be.

I’m with Double but of course we can’t criticise Wenger, people will be getting all flustered and get all thumbs down clicky…

As for Theo should have known better, half the ‘fans’ on here would have likely then said, “Ohh Theo, you need to man up and fight for the team, etc, etc.”
In fact, strange how when Cesc did it he was lauded a hero.

I wonder if all the fatigue of playing full 90 mins in countless matches is finally catching up with RVP. Lack of a decent backup striker is truly hurting Arsenal now. It may not seem much but you can see how RVP’s timing is off over the past few weeks. Unlike other strikers he does so much for the team in trying to create chances for others as well. This has masked the fact that he needs rest. Wenger has really overplayed him this season just like Wilshere last year. I think that this team is now mentally fatigued. They… Read more »

TBH I think it’s just that RVP was in top, top form for 12-13 months and unless you’re Messi/Ronaldo it’s very hard to sustain that. Just a natural drop in form. Doesn’t look tired to me (although I do agree that we need a backup striker).

Even Ronaldo and Messi are afforded a rest, we’ve not been in a position to do that. Ronaldo’s a twat anyway. You should be ashamed for even insinuating he’s better than Robin.

Hope Diaby gets more game time, you can tell he’s got the quality, just a matter of keeping him fit. Ox showed again he still has a lot to learn, but as with Diaby, you can see glimmers of the kind of quality that Ox will bring to the table over the coming years, will be great to see him develop! Only thing is I worry about the hype around him, a lot of people want him on 24/7 but personally I’m glad Arsene is being cautious with him as he will develop properly as opposed to not being able… Read more »

To be honest I couldn’t care if Theo never played for Arsenal again, I find watching him too frustrating, he goes missing to often for too long, rarely shows for the ball and decides to mark opposing defenders when we attack instead of running into space. Worst of all are those runs when he gets the ball, the ones that end up in him falling to the ground just after he cuts inside the defender.

Agree.TW is a major bottler and unless
he ups his game Braca or Barca can
have him .
He is a major disappointment on too many occasions

Next season will tell you whether he’s up for it or not. Assuming the progress of AOC and Miyaichi continue at their current trajectory, as well as Joel Campbell getting a fair go in the off season, then Walcott will need to do a lot more (and with greater consistency).

This actually might be a blessing in disguise. Since the Spurs game Walcott hasn’t done much. I would like to see the Ox start the next three games on that right side, the youngster needs the experience. One big worry is that Van Persie has definitely lost his touch. He had a couple of good chances that he would have put away earlier in the season. And we need to score a few goals now. The one good thing about today is that Spurs lost again. It looks like the wheels have come off. It’s now us, Newcastle and Chelsea… Read more »

I agree with everything you just said.

sometimes you two rise above it and come out with sense… this isn’t one of those times.

As inconsistent as he is, its a shame to hear walcott’s injured
It seemed inevitable though, he’s played 43 games this season, however in those games he’s assisted 13, scored 11 and been involved in however many build ups
Get well soon Theo!

The forehead needs to step up now, im not having all this he’s suffering from the African nations cup disappointment shit.
We need proper performances from the players that have not delivered of late in the next three games.
With rvp out of form not sure where the goals will come from now seing as the club in its wisdom decided that park and chamakh would be perfect back up for rvp but arsene decided that neither could hit a barn door with the preverbial banjo.
Perfect time for the forehead to deliver some goals then.

Time to get rid of this waste of space theo along with chamack,park,ramsey, bentdner, denilson,diaby,sqilaci and manuel they are not up to arsenal standards and are way overpaid and wasting squad spaces