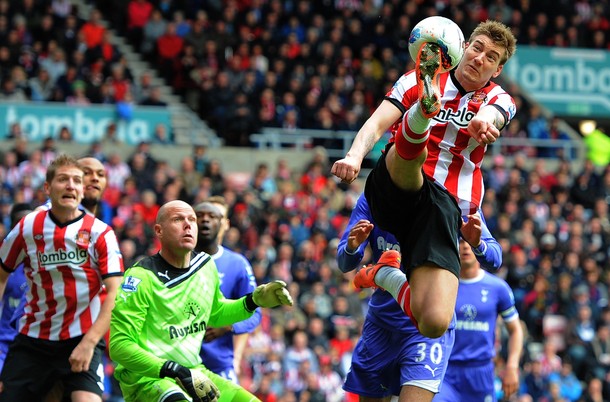 In a startling interview with Danish publication Cover Man, Nicklas Bendtner claims that his drink has been deliberately spiked with drugs on a night out with friends.

The striker, who is set to return to the Emirates after a season on loan at Sunderland, claims that not only has he cut down on his extra-curricular activities as a consequence, but that when he does indulge in the odd moonshine session he never puts his glass down where it can be tampered with.

Name checking an incident at Boujis nightclub in South Kensington where he was famously (and literally) caught with his pants down by paparrazi, the 24-year-old stated:

“I was out with a friend and we were doing shots. When I woke up in my bath I was blank. I was told that I’d lain down and had to be retrieved from the water.

“The club had been closed for an hour at the time and then someone obviously called the paparazzi. I was drugged, I think.”

Claiming the similar incidents have also happened in Denmark to his friends, one of which ended with his friend being hospitalised, the striker stressed that he now tries to resist the temptation to go out, recognising his reputation for being a party boy does him no favours.

Bendtner is not expected to play again for Arsenal having made clear his intentions to find another club this summer. While he certainly hasn’t covered himself in glory during his eight years in North London (or during his stint in the North-East), the idea that people have allegedly gone out of their way to target him is certainly scary and a warning to other young members of the squad. If indeed his allegations are true.

Sympathy from Arsenal fans is likely to be short on the ground either way.

Thanks to @Ryo_Cleverfish for the heads up.

Glad he’s not coming back.

Must have been drugged during the Barcelona game too

Wow. Surely, someone has to be sued!

I will refrain from all Great Dane jokes.

No Nicklas, you weren’t drugged. You were shitfaced.

and all black looking creepy.

It’s not in any way connected but wouldn’t you just hate to watch chelski this evening, knowing that your chance to qualify for the CL is in their hands? I’m still happy about the win at west brom 🙂

thanks Mr Gibbs for that 😉

And that dodgy Albion keeper most of all.

Arsenal Champions League qualification still is in Chelsea’s hands. If they win Arsenal’s guaranteed place turns to a qualifying place, which means two difficult early-season games and Champions League money not being guaranteed until late August with all the transfer market uncertainty that will entail….

That’s not true Arsenal go straight through to the knockout rounds.

Not saying I’m right, would love not to be, but just researched internet pretty thoroughly on this point and seemed pretty definite Arsenal’s place gets downgraded to a qualifications place if Chelsea win tonight. So, are you really really sure that that is *not* the case?

Get your facts straight.

Phew, many thanks for that link. Heard presenter on 5Live say the opposite earlier. Great.

Look at the facts mates, he scores when he plays. Exept for one game in Wankcelona.

Are you on drugs?

Not performance enhancers then.

hahaha that was brilliant

i dont think we should sell bendtner.. Since both him and Eboue are gone we need a class-act clown at arsenal who can provide us with classy comedy moments like the time that Eboue thought he was man of the match and bendnter didnt really get what was going on cause he was convinced that he was man of the match. every team needs a clown. maybe we should look into giving bendnter a new contract as a new gunnersaurus, someone who gunnersaurus can pingpong with… maybe frimpong could be the new clown, but i think he has too much… Read more »

I found your most hilarious assertation to be that Frimpong is not a clown. Have you seen his twitter account?

Frimpong’s not a bad footballer, but give his Twitter a read – you’ll see his true talent is comedy.

I reckon most players on a Sunday morning are on drugs yet they still play better than Bent Foot Bendtner…..

Similar thing happens to me every friday most saturdays and occassional sundays mainly bank holiday weekends. whoever is doing this can they please start doing it on thursdays as i only do a 4 day week now.

His excuses for being shit are running thin. Please fuck off .

Of course that happened, Nicklas, if you say so!

How many more excuses will Nicklas Bendtner come up with to “explain” his off field behaviour and lack of commitment on it?

I thought he was only suffering from egomania. I didn’t realize paranoia was part of the mix too.

“I was out with a friend and we were doing shots.”
Yep, that’s probably what did it Nick. You goon.

santos seems to be good for a laugh from time to time.

Thats what you get for spending most of your time in the bar instead of working on your pathetic football. Oh Bendtner, – a classic example of overpaid young footballers.

Only wish they had spiked his drink to increase his footballing skills.

I Hear Dortmund want him , Maybe we can exchange with Kagawa ,Or just some money ,or with a Reserve kid or just for free or will pay them to take him

You heard from whom? This has got to be Bendtner and his dad feeding nonsense to the media just like they did all last summer. Shame not a single one of those stupendous offers Bendtner was supposedly mulling over actually existed. Dortmund didn’t want him then and they’re even less likely to want him this time around; even Sunderland don’t want him, for God’s sake. The only comfort I can think of is that this is the final year during which we’re responsible for his wages.

On second thoughts, if he can’t find even a loan deal I wonder if we do have to go on paying his wages. Since he’s been in trouble with the police at least three times in the last year (speeding, drunk, beating up cars), wouldn’t he be guilty of repeated unprofessional conduct? If so there may be a clause in his contract that says we’re not legally obliged to keep on paying his wages. Anyway, he ought to do the decent thing and agree to take a massive pay-cut so some lowly Championship club might be willing to give him… Read more »

tgstl has been drugged one time too many. but the one that put those pills in the Barcelona game clearly wanted to mess with me as well.

I was out last night with friends doing shots. I must have been drugged too!

Just like he “woke up in the tub” I think he woke up in front of goal with no idea how he got there or what to do, many times…

Out doing shots? I’d be happier if he was taking shots…

What a twat. Lightweight can’t handle the drink and now he’s claiming he was drugged?
Meh.

“I was out with a friend and we were doing
shots.”

Typical bendtner day, nothing new there.

None of them were on target?

I reckon he has been out with derek branning and his moody absynthe!
i am certain wenger will read this and think aah he was only doing shots with his mates no wonder he trashed those cars and got caught with his pants down. lets give him a chance to replace rvp he deserves it………will he fcuk bendtner is coming out with this drivel to force.a free transfer

“If indeed his allegations are true. Sympathy from Arsenal fans is likely to be short on the ground either way.” The ending here seems to be an invitation for all the jabs below the line, so I’d like to interject some constructive thoughts. Maybe his claims of drink drugging are true. They hardly stretch the imagination. In any case, for a player courting offers from other clubs, except for the roofies claim, this is a standard effort to rehabilitate his image. Of course it is transparently self-serving. But so what. I do not have a problem with that, for a… Read more »

Well if it resulted in him spending a little less time with his party hat on, its not all bad…

Hahaha. So typical of the Great Dane. Hope we offload him without much trouble.

The Greatest Striker to Ever Get Roofied

Being a professional athlete is more than just having the right skill set on the pitch. It also includes with whom you associate off the pitch. Spiked drinks or not, at the end of the day, it is your responsibility to take charge and be in control.

I’m going on a massive Bendtner tonight! Sorry is that really poor!?

I felt dirty for rooting chelski today. But! As we all know it, they win means sp*rs is out from Champions League! And by the way we still the King of London! Oh about bendtner… Mancini just called me about buying him for 100 millions pounds lol

Who the fuck would waste their perfectly good drugs by putting them in his drink?

Hate people who always say their drink was spiked. DO YOU EVEN REALIZE HOW FUCKING SILLY YOU SOUND. You can’t handle your drink. Stop making excuses, just stop drinking and stfu.

Did whoever spiked his drinks, steal all his talent as well? There’s been precious little sign of that in a very long time.

Yeah, I believe your “Somebody must have slipped a drug into the 23 shots I drank last night”.

Somebody should tell Bendtner that alcohol is a drug and can do that to you on it’s own without any help from bad people. All it needs is one stupid person.

Wish we had a recording of this. It sounds like something I might say, with tongue firmly in cheek, to explain a photo like that to my mother or wife. Will we ever truly know if he was serious when he said this?

Headline: A man got really pissed, made a complete twat of himself and made up a ludicrous excuse for it the next day.

Other news: Pope is Catholic, sun comes up in morning.