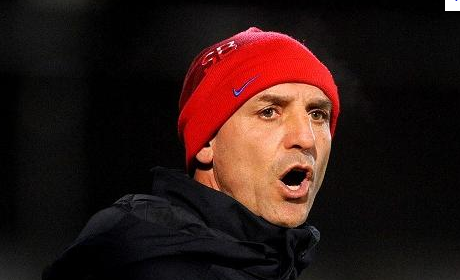 After months of speculation it was finally announced this week that Pat Rice would bring his 44 year association with the club to an end when he retires following the trip to face West Bromwich Albion on Sunday. The news that Steve Bould will be promoted from his current position as Arsenal’s under-18 coach to become Arsene Wenger’s assistant and that Neil Banfield would move from being in charge of the Reserves to also become part of the first-team coaching staff was also expected although, as yet, the club are yet to make a firm decision on who their respective replacements will be at reserve and youth level.

Firstly, though, it is worth reflecting on the pedigree that both Bould and Banfield have established during their time in the reserve and youth set-up. Bould, of course, was already revered by Gunners’ fans for his exploits for the club as a player, but he has continually developed his credentials as a coach since rejoining the club in 2001. Having previously taken charge of the under-16s, he was promoted to the under-18s for the 2005/06 season and, in the ensuing period, has garnered an impressive reputation in guiding Arsenal’s promising youngsters in furthering their careers. A standout highlight is the 2008/09 Premier Academy League and FA Youth Cup double winning campaign, whilst the former competition was also retained the following season. Last season was not as successful in terms of the side’s league standing as a team consisting almost entirely of first-team scholars struggled to adapt to Academy League life, but this campaign has had a more familiar feel about it, with Arsenal finishing third in their group.

Bould has never shied away from letting players, even schoolboys, know that they cannot shirk their responsibilities and a recurring theme of his tenure as under-18 coach has been his vehement half-time team-talks which have often brought out of the best of Arsenal’s young talent in the second halves of matches. Despite his reputation as a commanding centre-back, Arsenal’s defence at youth level in recent years could be described as porous at best, but, when working with experienced members of the first-team squad, perhaps with the exception of Sebastien Squillaci, the skills that Bould acquired during his playing days are likely to be put to good use.

Banfield, meanwhile, did not enjoy anything near the illustrious playing career that Bould did, turning out for Crystal Palace, Adelaide City and Leyton Orient, but as a coach he has developed a favourable relationship with the players that have come under his tutelage, with the training sessions of the man born in Poplar proving particularly popular. As with Bould, there have been peaks and troughs in terms of results during his time at the club, with a 6-1 loss to Reading in 2006 and a 10-1 reverse at the hands of Aston Villa last season springing to mind, but, on the whole, Banfield has proven to be successful with a firm but fair approach to proceedings and his close relationship with Arsene Wenger should stand him in good stead for the new challenges that he is to encounter.

As far as the implications that this will have on the Reserve and under-18 sides, all is currently unclear. There has been much talk that Bould and Banfield will be internally replaced, with one possible option being to promote Steve Gatting, another former Arsenal player, from his current position as coach of the under-16 side. Steve Morrow, currently in charge of Arsenal’s international partnerships, has also been touted in some quarters as a possible candidate for either post, although a firm decision has yet to be made by the club.

Whoever their replacements prove to be at reserve and youth level, Wenger can be certain that, in Banfield and Bould, he will be able to call upon two individuals who are well schooled with the way in which proceedings are run at the club and who will be able to add their own invaluable input when called upon. The fact that both have also worked with several members of the first-team squad in the past is a further plus point, suggesting that the revitalisation of the coaching staff is likely to have a positive impact next season.

I would like to see Dennis Bergkamp get his opportunity to coach for either the reserves or U-18s.

I’d love to see Dennis back, but he’s pretty happy at Ajax, no?
I don’t think he’d be content here at any position lower than Assistant Manager. ..

It’s his ambition to work at Arsenal ,I think he said that

Yeah, what I meant was that his job right now is fine, and as much as he may like Arsenal, I don’t think he’d leave it for a small job, even if it’s at Arsenal.

I would hardly say that u18 manager is a small job at our club. Not with the kind of importance we place on youth development and promoting youngsters through the ranks, it is quite an important role.

goonero he is assistant manager of ajax not some obscure dutch team an their academy is fame for producing world class player and their whole club is build around it. if we can only offer him under 18 or reserve i can bet he will refuse .

yeas, but, if you consider that Bould and Banfeild have both spent sometime in the lower set ups before being promoted the Reserves and U 18 roles take on a new significance.

But much as I love Bergkamp, we don’t know for sure if he’ll be any good as a coach, now as an intelligent footballing man he’ll obviously have good input to make, but he can never be the manager. He ain’t getting on no plane.

Have Dennis the great back as manager…….. then we may be able to move forward rather than stagnate for another 8 years!!!

aha.he’s gonna be the man when arsenal play their 1st 3 champions league matches next seasn.wohooo!!

Bould’s reaction to fully paid professionals making school boy errors is likely to differ to his reaction when dealing with the kids.Improvement in defense should be expected

Is it really? I mean in the article it says:

Bould has never shied away from letting players, even schoolboys, know that they cannot shirk their responsibilities.

People expecting this move to radically improve the defense are in for a big let down.

Surely by this quote we should think it would improve….?

Like Wenger said, its evolution, not revolution. Our cerebrum just got larger.

HR
Reply to  van persism should b a religion

Nice article Jorge and for people like Michael predicting a fall before a step, give Bould and Banfield a chance will you. I’m not sure what to expect good or ill, but they deserve a fair crack, we don’t know the ins and outs of the training ground are , much as some pretend they have the inside track.

Anyone know how/why Banfield was promoted too? Does Pat Rice handle duties for both assistant manager and first team coach?

There is a strong rumour that the club are pulling out of the reserve league as they are competing in the next gen series next season. This will result in a larger first team squad and the under 18 manager basically becoming a youth team manager who manages the 2 under 19 competitions (next gen and fa youth cup) plus the under 18 league. There will also be more friendlies arranged.

When we stop leaking goals like a sieve, then we can say that they have/ are having, an impact. Until then, I won’t hold my breath.

One of our problems is that sometimes Vermaelen goes rampaging forward at the wrong moment and Kos is left with too much work to do when Song inevitably loses the ball without Arteta there to help him. We let in goals because Vermaelen isn’t always where he should be at the appropriate time. I think that it will be great for Bould to work more closely with Vermaelen because the Verminator didn’t go through our under-18s so hasn’t had the benefit of Bould’s knowledge and training. That will all change now. I think we will see Vermaelen improve as a… Read more »

Oh so this is going to make a difference is it??? All that has happened is that Wenger has surrounded himself with a bunch of yes men none of who will stand up to him, Bould and Banfield are coachs moulded by Wenger into what he wants, do you REALLY believe that they will question him??? Nope all we will see next season is a different face on the seat next to Wenger but the same reaction….dont speak until they are spoken to!!! And with Wenger in charge still don’t ex pect any change in playing style, player quality or… Read more »