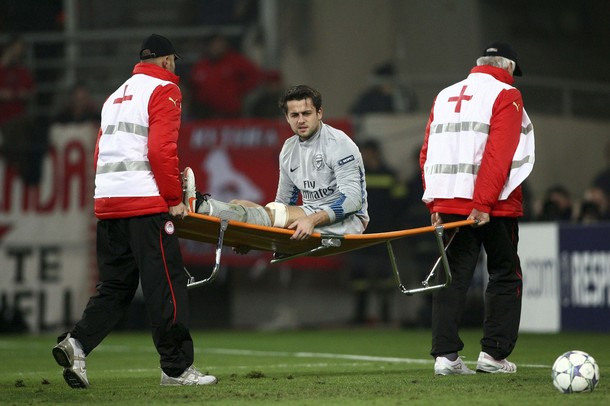 According to the Polish press, West Ham United are leading the chase for Arsenal goalkeeper Lukasz Fabianski.

Second in the pecking order behind compatriot Wojciech Szczesny, the former Legia Warsaw man admitted recently that he is desperate to leave the Emirates in search of first team football after a frustrating year which has limited him to a handful of appearances.

Having secured a quick-fire return to the Premier League via the play-offs at the weekend, West Ham, the only side in English football to be managed by a Walrus, are thought to be eyeing Fabianski as a possible successor to Robert Green, with the England man’s future at Upton Park in doubt.

Following an injury to Green earlier in the season, West Ham took Manuel Almunia on an emergency loan proving they will, if desperate, sign pretty much anyone who can put gloves on.

Given Vito Mannone’s desire to also quit N5 it appears that Arsene Wenger may need to go shopping for a new reserve keeper this summer. While whispers suggest young Argentine Damien Martinez will be promoted to the first team, you can’t help but think an experienced head inside the camp could come in useful, especially given our past problems with the position.

With thanks to our friends at http://gunners.com.pl/

It matters not a jot but he’d horrible in Fat Sam’s training sessions.

Damien Martinez to be third choice.

Would be happy with that.

A race for Fabianski suggests there’s more than just West Ham looking to give their fans a heart attack at numerous times on matchday.

Can we just transfer burger king to fat sam instead? Not looking forward to hearing his mouth or seeing his fat face in the prem next term.

The way i see it Arsenal need a keeper themselves rob green is looking to move on to a small club in a rundown part of london & willing to play in front of fans who never get excited + apparentley he has a life long ambition to join a club on the slide who live in the past.

In otherwords he’s fine where he is?

Don’t let this chace slip through your fingers Fab… Oh.

Green gunna stay and no way would be want to sign Flappyhandski. Ridiculous even writing an article about something so blatantly untrue. Just signed Henderson for back up so he wouldn’t even make the bench you can keep him. See you next year.

Er, Almunia played for you last season, did he not?

As did Lansbury (in goal).

That guy wouldn’t know, he was too busy trying to save the world with the rest of the Avengers.

What’s the point signing a new ‘keeper? Szczesny is our main choice, and I doubt the two highly-rated youngsters are going to be so shit they can’t cover if Szcz is out. They may be inexperienced at top level, but you don’t have young talent there as cover if they are going to be overlooked when opportunities to gain experience present themselves. Seems a total waste of money to me.

If Szczesny gets injured would you want a complete novice between the posts for several games? I also think that Szczesny could do with an experienced pro around the place to help offer advice and iron out the small flaws in his game, no idea who that would be though.

Hasn’t Craig Gordon been released recently? Would be a more than adequate number 2 if he can prove he wont be injured all season!!

I rate Gordon and wanted to sign him when he left Hearts (in hindsight that would have been a bad move) but I doubt after so long in the wilderness at Sunderland (the bench not the place) he would accept another substitute role.

arseblog, Almunia and Fabianski are two different people. Almunia was on loan for about 5 games and was sent straight back when Greeno recovered from injury.

Just saying, if you’d play Almunia it’s not too much of a stretch to suggest you might be interested in Fabianski.

Anyway, we’re just reporting what’s in the Polish press. You know your club better than I do so if Green is staying great. We look forward to seeing him again 🙂

Ironman, while Fabianski went through a poor spell with us, he did start playing well until he got injured and Szczesny got his chance. Don’t write him off. There are worse keepers than Fabianski in the Premiership.

Rob Green for one.

The whole Fabianski/mannone/Almunia thing is now getting on my nerves.Dump
them all and start afresh.
Chesney will be Número UNO for years to come.Lets find a good standard keeper who is willing to play CC/CL dead matches etc and not cause AFC any
Aggro.
It’s the rest of the team we need to look at for next season more closely

Why not get Jens Lehmann back?
Wev’e had Henry how about Lehmann?

Is Mart Poom at the club? I seem to recall him being linked to us in a coaching capacity.

Let’s get Jens on the coaching staff and let him play the odd game as no.2 if required

Let’s not forget that Lukasz did come out the other side of his horrific run of form and started to look like a reasonable keeper. West Ham wouldn’t be such a bad fit, and if he got a long run of games would do a good job for them.

Trade in fab and almunia for their number one………….anyone?

Yeah even I know I’ve posted shit.
Forgive the blab.

Let me think about it..

Its so sad that people think Fabianski is a bad keeper because of a few howlers. I bet Big Sam sees what I see – one of the best one-on-one keepers I’ve seen on his days. Methink in a year’s time we will regret the ‘wrong people’ we are getting rid of in the name of deadwood. To me, one of Fabianski and Mannone (who has been keeping clean sheets for fun in Hull) should stay. So also Benayoun, Arshavin (playmaking behind the main striker and without an iota of defensive duty) and Vela. But it won’t be unlike Arsene… Read more »

Hello mate, I agree that Fabianski or even Mannone would be good back up if kept and even Arshavin (if used where he should be rather than out wide) and I also have a soft spot for Vela. I don’t think they have been written off as deadwood. Most of these guys have actually expressed a wish to go. I wouldnt put any of these guys in my first team so If they want to go elsewhere and prove us all wrong then good luck to them.

If Fabianski goes to West Ham it would be like of those those ironic twists. In other words, he’ll have the game of his life every time he plays against us. When you think about it, Fabianski’s strong as a shot stopper. His weaknesses, i.e. crosses and set pieces, for the most part, are things Arsenal don’t particularly excel at.

There are certainly a lot of details like that to take into consideration.http://news.arseblog.com is really good. That is a great point to bring up. I offer the thoughts above as general inspiration but clearly there are questions like the one you bring up where the most important thing will be working in honest good faith. I don?t know if best practices have emerged around things like that, but I am sure that your job is clearly identified as a fair game. Both boys and girls feel the impact of just a moment’s pleasure, for the rest of their lives.