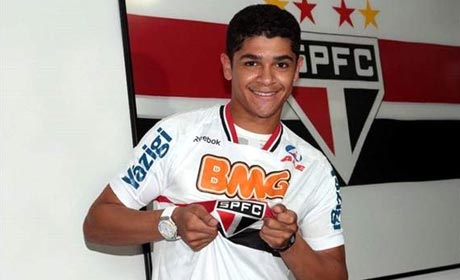 As the most exciting transfer saga of 2011-2013 continues, we bring you the latest updates on DENILSON. Yes, we do.

Some quick back story for those who are just joining us:

Denilson was a young, tenacious central midfielder who joined Arsenal as an 18-year old from São Paulo in Brazil. Both his cool ‘fro and initial appearances for the club were extremely encouraging, and we thought we had a real talent on our hands. He was even called up to the Seleção by Dunga. Then he starred as a dancing puppet in Gilberto Silva and Julio Baptista’s music video “The Invisible Beast“, and people everywhere went “Awwww”. He continued to play football, to varying standards, scoring the occasional blinder. Then something terrible happened – Denilson became something of a first-choice in the middle of the park and his game went to poo. After about a year and a half of absolute dross (but a great pass completion rate), Denilson fell out of favour last summer. Strangely, no transfers within Europe materialised, and he went back to São Paulo on loan. Arriving there, he played quite poorly, and we all thought “How could his value get any lower?” However, Denilson had a cunning plan – by getting himself sent off game-after-game, he managed to build up a reputation as a hardman, while getting through his (very long) patch of poor form by being suspended all the time.

Fast forward several months, and things are going well for the lad – he’s settled, and after an injury to first-choice Wellington, has apparently become an essential part of the team in his role as a volante, supporting Cicero and last summer’s Cesc-replacement-rumour Jadson (what happened there). Cicero called him “essential”, “very professional”, and “fundamental to their tactics”. I say!

The “Warrior” Denilson himself had this to say:

I try to work for the team. I’m not a player who tries to please the crowd, because I play for my teammates. I give 200% for the team to emerge victorious.

He also took time to acknowledge the support of legendary coach Émerson Leão, who wants him to stay on:

I’m happy for the praise of Leão, who always supported me and helped. He provided an opportunity at the beginning, when it was difficult. Then I showed my willingness to stay and work, and now I am achieving good things. My goal was always to be champion. I hope we can be champion of Brazil.

This entire Denilson press coverage mini-commotion has come about because of São Paulo’s advance to the semi-finals of the Copa do Brasil. Having come off the back of a fairly poor 2011 league campaign (won by their recently promoted city rivals Corinthians), the Copa is São Paulo’s best shot at silverware and respectability, and more importantly – qualification to the next Copa Libertadores (which they missed out on this season).

With the team in good form, and Denilson’s loan set to end on June 30th, Paulistas everywhere (but mostly in Paulista state) are worried that he might miss out on the finals (two legs, played on July 4th and July 11th). The teams have apparently spoken about a two-week loan extension (wisely, Arsenal have said to see what the outcome of the semi-final is first), but Denilson wants to stay permanently:

There is the possibility of signing for 4 or 5 years. I had a conversation with my lawyer about staying, but the Arsenal asked to wait until the semi-finals. Let’s go step-by-step, ooh baby. Everything is possible. My contract with Arsenal is until 2015 and I will have to respect it, but until then many things can change.

My lawyer is working things out and São Paulo is doing everything possible to work out my staying. I cannot do anything else. Let’s play. If we win, we think long term about staying until the end or not. If we get past the semi-final and Arsenal accept my stay for another two weeks, I’d love to play the finals. Having worked and fought from the beginning of the championship, I do not want to miss out on the final.

So there you have it – Denilson may stay on in Brazil for 2 weeks, 5 years, or not at all!

One thing is for sure though – having finally found some form, and raised his profile, there will probably be SOME offers for Denilson, and since we need to trim the squad, we can hopefully find an acceptable one. The São Paulo board has not yet commented on the transfer, but is hoping to convince Arsenal to come to a settlement – they have an overall transfer budget of R$15 million, part of which they can put towards “repatriating” Denilson, who cost us R$11.2 million in 2006 (£3 million at the time).

It’s a great time to be playing in Brazil – investment in the stadia and teams has gone up, with a conscious effort being made to raise the standard of the competition and increase attendances in the run up to the 2014 World Cup. There’s an air of optimism around the league (linked also to the country’s economic progress) and starlets like Neymar and Ganso have stayed on, whilst big names like Ronaldinho, Rivaldo, Ronaldo, Fred, Luis Fabiano, Jadson and our very own Denilson have all made moves back from Europe

Emery on summer transfers and youth integration for next season

Wenger on transfer changes and the rest of this window

All signs point that I won’t loose sleep over it.

Somehow I see Denilson’s lawyer dude telling Ivan “Look, mate…if you don’t let him stay in Brazil another two weeks, I swear he’ll be on your payroll for another FIVE YEARS.”

I recommend Ivan swallow his pride and blink on this threat.

He really said “ooh baby” in an interview?
I hope his work paying off with a contract at Sao Paulo.

Is it me or does that football top make him look like a motorbike stunt rider ?

Tenacious Defence
Click to flag and open «Comment Reporting» form. You can choose reporting category and send message to website administrator. Admins may or may not choose to remove the comment or block the author. And please don't worry, your report will be anonymous.

Truly hideous looking top. Let’s hope the Arsenal shirt never gets desecrated in such a way with advertising running up and down it in clashing colours.

“What’s that darling? What am I wearing? What a stupid question! Full Chelsea kit of course, I wear it everywhere remember! What do you mean I’ve ruined the mood? And I’ve told you before Ashley, don’t call me on this number”

I miss you Tim

Sul you are turning into my favourite writer for Arseblog mate 🙂

It’s crazy like; Brazil, one of the biggest economies in the world, and some of their football teams can’t amass the European millions to purchase players. I hope the transfer goes through for Denilson, he always had a soft spot in my heart, especially with that cracker he scored against Everton. To come over to another continent on “your” lonesome as a youngster is tough and he deserves a break.

Seriously never given a chance at the Arse because of Fabremerc’s shadow, come join me in Germania, we’ll show what these so called “fans” are missing out on!

Fuck off John she’s mine

Say my name
Click to flag and open «Comment Reporting» form. You can choose reporting category and send message to website administrator. Admins may or may not choose to remove the comment or block the author. And please don't worry, your report will be anonymous.

Have any spare diet pills?

You’re damn right I do.

dad so many people don’t understand what gunner2013 means?

go ahead and tell them dad

during one quiet night I had a vision. a vision that next season Arsenal will win everything on offer. I saw the…will continue later.wat a family. they are all gooners;) *a proud Dad *

WHO LET THE FUCKING DOG IN AGAIN?

Package him and boteho up in a bogof deal

i said u buy 1 and u get 1 free. that will reduce the 29 homegrown/non homegrown numbers by 2 edging us nearer to being able to bring in replacements.

“200%” – is he having a laugh? He used to infuriate me with his jogging back after an opposition fast break. The sooner we’re fully rid of him the better.

Could it be that our coaching team was unable to inspire him to work hard while São Paulo were able to do so? Maybe we should let them have him for free in return for the secret of how to make lazy players work hard.

一切迹象表明德尼尔森似乎确凿将留在巴西 | Arseblog新闻中文站
Click to flag and open «Comment Reporting» form. You can choose reporting category and send message to website administrator. Admins may or may not choose to remove the comment or block the author. And please don't worry, your report will be anonymous.