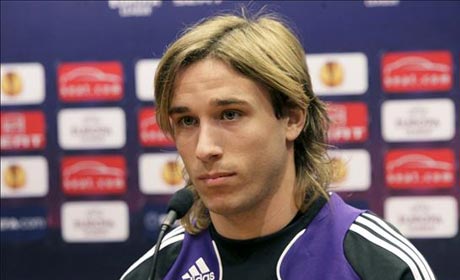 Lucas Biglia, the Anderlecht and Argentina holding midfielder, claims that we have made contact over his signing along with Real Madrid. We’ve been linked with the player (and his club team mate Matías Suárez) for some time now, and he gave confirmation of this in a radio interview from his hometown of Buenos Aires (as reported by Diario Olé).

“There has been contact with Real Madrid, and also with Arsenal, and we are waiting. I have a contract with Anderlecht until June 2015, but the club knows that I intend to go. We have negotiated my release clause and if a club comes along that is willing to pay it, Anderlecht let me go. Real? If God wants. If Madrid makes a concrete offer, it is my priority.”

The release clause is thought to be around €10-12 million.

It remains to be seen whether Biglia is a Bigliar or not, but one thing that seems certain is that we are showing interest in holding midfielders. Considering the number of reports we’ve received about Arsenal being interested in Yann M’Vila, Javi Martinez, Odil Ahmedov and Lucas Biglia (with varying levels of substantiation), we are either looking to reshape our midfield, or employing some cunning negotiation tactics with Alex Song over his new contract.

Sambi thanks Kompany for helping him seal Arsenal move

Funnily, I met this guy once at Brussels airport. All I remember was his huge Louis Vuitton handbag. Oh well. 🙂

Really? Madrid? You’ll be on the bench even if you play well son.

What lies. Real will never play him.

well if he develop to a cunt like Pepe ,He’ll get playing time

Nice to know were looking around at options. It’s an area where we need alternatives.

A proper DM is exactly what we need. it would be my first priority for transfers in. obviously the rvp song and walcott contract talks are also right up there i feel that podolski is our rvp insurance in case he leaves whilst a dm signing will be our song insurance. i think wenger has also secretly sorted out his theo insurance with either suarez or affelay being that. if all 3 stay then he will have strengthened the squad as well as the team. if all or any of the 3 go at least he will have top class… Read more »

As if Wenger would do that! Its what we all hope he would do, but it aint going to happen

Well, thanks for announcing we’re your second choice, Lucas. I can tell you right now that if you’d settle for Arsenal, we might find it in our hearts to settle for you. M’Vila is our priority, you see. But we’d settle for you.

..and we already bought a lucas ,he was our second choice . we have so many lucases we are offloading one

Kudos on the name.

I hate that Arsenal end up second choice to the spanish cunts, but you have to understand the mindset of the latin people. Even if we won the EPL and the CL this year, they would still prefer Barca and Real to us. Those two teams are GOD in the latin world.

i think Sergio Ramos might throw the dummy if you joined Madrid for stealing his look. we dont need any pretty boys in our midfield either. We’ve got all we’ve ever wanted in Mikel 😀

Right you are, lego hair is our midfield posterboy!

We only want players that seee us as priority and want to play for Arsenal. No more mercenaries !

It gives me Hope that we are looking for a Proper DM,but Bilgia would be on the bench for realmadrid at least for the next 3yrs

True. Why do Real want more holding midfielders anyway? They’ve got an army of those there – Alonso, Lassana, Sahin, Coentrao, Granero, Pepe, Altintop.

big mouthed n double minded fans as well. yes you! looking at u!

ohh Theo is good…one bad show. Theo is utter shit! I know a majority of u want him be sold to Chelsea. that’s unbearable of u so called diehard fans

Oh good so if he turns into a decent player, he’ll end up at Real. I’ll pass.
I think M’Vila and Capoue are our best options in that area, and they seem the most likely to happen.

It makes sense signing an older DM ,By the time he starts diminishing or fucks off to Real madrid , Coq and Frimmy will be ready .

But I am more interested in that other Anderlecht player , Matias is pure talent

Settle people its just an old quote…
All he says is that there has been contact from Real and Arsenal…
him and his manager have been saying the same thing for the last year…
nothing more nothing less. Its just them saying hey guys [real and arsenal] don’t forget about me…its BOLLOCKS!

Biglia eh? got to be a joke around here somewhere

he might not be that good, maybe everyones just biglia him up?

to be fair, fine with just Song he’s biglia then him anyway

fuck got my coat im on my way out, taxi for one….

Yeah let’s go on and bring up transfer news in which were second choice. I’ve got a few in mind.
Good players, turned cunt players……too much money (don’t care about playing time anymore)

why are interested on every player when we know its impossible to march their cost?

Or *april their cost.

Just to clarify, the Real Madrid thing was a question he was asked – “would you like to join Real?” and he answered honestly.

A certain Mr. Robert Pires also had his heart set on joining Real before a conversation with a certain Mr. Arsene Wenger. I’m assuming the logic using in convincing would be the same – go to Real and be a squad player or sign for us and be a star.

Yeah, but at that time we were winning trophies and were probably on a level with Madrid (if not slightly better), now we are neither, so I can understand why players would prefer them to us these days.

I’ve never seen this bloke play, so have no idea if he is decent or not. But I do think M’vila would be perfect for us.

It looks like we’ve been targetting a lot of DMs and CFs recently. Do any of you think we’re gonna revert back to 4-4-2?

He’s got better hair than Torres, we must have him. LOL. In reality though, haven’t seen this player in action but it looks like he knows how to play the transfer game.

would be funny to see him frimpongin’ torres…

Alex Song”s a holding midfielder? Will someone tell him that please?

Every time I see pics of him I think I’m looking at Fernando Torres. I’d rather have M’Vila & if Biglia wants to go to Real to sit the bench (and win trophies) go ahead.

In disappointing but expected news Manure have announced the signing of Kagawa.

Another team who recognizes a need due to loss of a player and immediately fills it is Lille. The sell Hazard to Chelsea and days later they sign Marvin Martin. That’s how you do it! Arsenal money grubbers take note because we could’ve/shoudl’ve been in for Marvin Martin.

Marvin Martin? Who the fuck is that? You don’t mean Marvin the Martian do you?

Are we going to spend the entire summer blaming the Arsenal board for not buying every single player some other team buys?

We’re probably sounding out a dozen players like him just to see whether a deal is possible at all and how they feel about Arsenal. If they start banging on about preferring Real or Barca or whoever else, then we know to just move on and not waste any time on them.

Arsene certainly wouldn’t want to sign someone who doesn’t want to be at the club and has ambitions set elsewhere. So, I’m fairly certain we won’t see this guy playing for us as he won’t settle.

we missed the trick on Marvin Martin

Martin is a CM and Hazard is a forward, not really a direct replacement

After two quality strikers, who should be next? » Arsenal Effect

[…] If M’Vila is not possible, names such as Capoue and Biglia have been mentioned. The Argentine has previously claimed interest from us so there is something […]

This website uses cookies to improve your experience while you navigate through the website. Out of these, the cookies that are categorized as necessary are stored on your browser as they are essential for the working of basic functionalities of the website. We also use third-party cookies that help us analyze and understand how you use this website. These cookies will be stored in your browser only with your consent. You also have the option to opt-out of these cookies. But opting out of some of these cookies may affect your browsing experience.
Necessary Always Enabled
Necessary cookies are absolutely essential for the website to function properly. These cookies ensure basic functionalities and security features of the website, anonymously.
Functional
Functional cookies help to perform certain functionalities like sharing the content of the website on social media platforms, collect feedbacks, and other third-party features.
Performance
Performance cookies are used to understand and analyze the key performance indexes of the website which helps in delivering a better user experience for the visitors.
Analytics
Analytical cookies are used to understand how visitors interact with the website. These cookies help provide information on metrics the number of visitors, bounce rate, traffic source, etc.
Advertisement
Advertisement cookies are used to provide visitors with relevant ads and marketing campaigns. These cookies track visitors across websites and collect information to provide customized ads.
Others
Other uncategorized cookies are those that are being analyzed and have not been classified into a category as yet.
SAVE & ACCEPT
wpDiscuz
44
0
Would love your thoughts, please comment.x
()
x
| Reply