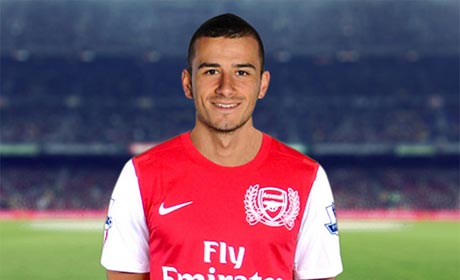 Turkish giants Besiktas have confirmed that they are close to agreeing a deal for our promising young Dutch-Turkish playmaker Oğuzhan Özyakup.

“Ozzie” has made a few appearances for us in the Carling Cup, and managed a spot on the bench in the league from time to time, but has never really been in contention for a first team place. Despite being reasonably technically gifted, and a good footballer, his lack of any real athleticism meant that it was unlikely that he’d break through in his favoured midfield position.

Until very recently, Özyakup had committed his international future to the country of his birth – the Netherlands – however he recently switched his allegiance to Turkey. German and Dutch-born players of Turkish origin have long been a favourite of both the national team and club teams in Turkey – the league has quotas on the number of foreign nationals in a squad, and players like Özyakup allow them to stay within the quota while still acquiring players of a high technical level.

We at Arseblog News wish the young lad all the best, and will now rapidly forget about him and probably not mention him ever again unless that 25% sell-on clause brings us a massive windfall.

Nooooo I considered him to be one of our brightest prospects 🙁

It’s not like its a major blow for us or anything, but I’ll forever be left wondering what might have been.

Nah.. Reject it. Give some game time next season if it work out as plan, we can fool Manshity for a few millions.

+him
Where is the edit button, blogs?

just want to say that i’ve seen him play few times and i think he’s a real talent, he’s also a very creative and i’m somewhat surprised and dissappointed we’d let him go, wouldn’t a lone deal have been better. As for the sell on clause, i don’t think it means much, even if his value ends up reach 10mill before he leaves besiktas,its only 2.5mill for us.

In your opinion 2.5 isn’t much money?

2.5 million pounds was more or less enough for a certain Dutch striker.

a buy-back clause like those knobs at barca do would’ve been ideal. only ever been impressed when i’ve seen him play for the reserves!

Yeah , and Wilshere and Chesney will bitch about his DNA in a couple of years

We have no control over the departure of our talent at either top level, or bottom : ) we are being bled dry, but Usmanov is evil, so it is nice and proper our future competition is Spuds, and Everton, and Fulham, if they do well.

What the hell are you talking about ?

Tho he only signed a new deal last summer it was after much deliberation that he penned for just 2 years. meaning he is another player entering the last year. the problem is that with 82 players still on the books it is impossible to keep everyone. players like ozzy who dont want to go on loan and are not good enough for the first team are stuck in the reserve rut. he simply has to leave. i think he will carve out a decent career without setting the world alight. i remember when JET merida nordveit and barazite all… Read more »

You’re spot on, he doesn’t lack talent but does lack athleticism. He could be a real star in the Turkish league, but not for us.
I can’t help thinking we could get a little more for him though – if we hold onto him for another season and start him in the COC his value might end up being a couple of million.
Or loan him to them this season and negotiate a price after that, hopefully after he’s impressed enough to get us some more cash.

I remember I think it was YoungGunsBlog who reported that he wanted to leave last summer in search for more first team opportunities, Arsene convinced him to stick around for another year. Guess it didnt work out.

It did, he stuck around for another year. 0_o

Denilson, for his age when he first played, showed quite a lot of ability and certainly a lot of athleticism.

His problem was that he stalled in his development.

Many youngsters get let go before getting much of a first-team chance and going by the lack of achievements by those we let go in the past, I generally trust the coaching staff’s judgment.

Remember, these guys have been doing their jobs for decades, they probably have a better idea of which player might make it than us.

Denilson had one of the best passing percentages in the team, it gets tiring people always bitching about him.

Sometimes the way we buy and sell players baffles me!

With our current 1st teamers in the middle, I just don’t see many opportunities for “Ozzie.”

Best that he gets a chance to start his career with at a level where he’ll get a lot of minutes. Good for him.

this is not a new problem at arsenal though… why can’t he just go out on loan to lets say bolton?
Remember Fran Merida few years back? Next big spanish midfielder coming through the ranks at arsenal, tasty left foot, comparisons with cesc? Oh you don’t? Thats because he fucked off to atletico madrid to get “more game time”. 2 years on he has made 19 appearances for them, got fed up of things and gone on loan to some portuguese club. An absolute waste of talent.
Would hate to see that happen to this lad.

Have to say Sul I think you’re slightly off the mark when it comes to this lad. I rate him a lot more than I do a few others but at the end of the day we have a plethora of midfielders and a talented ambitious lad will want to play football.

He’s a good player, but we do have a lot of competition in centre midfield. Some of these lads simply won’t get the chance to shine at Arsenal that they would elsewhere. This move should help to kickstart his senior career. Good luck to him.

Will never know how good he was but he did deserves some playing time who regards rvp as his guardian at Arsenal. Was hoping to see him make a certain appearnce in our second leg against Milan when OX was struggling but then chamakh and park came on.

Good luck Ozy. id personally like to see us give some game time to Lansbury. the boy’s had back to back promotions in the championship with west ham and norwich. he must be doing something right??
Plus didnt we tie him to a new 5 year deal recently?? shows confidence.

Oh no. I’m sure he’ll be a first teamer if he sticks around for a couple more. Amazing passer.