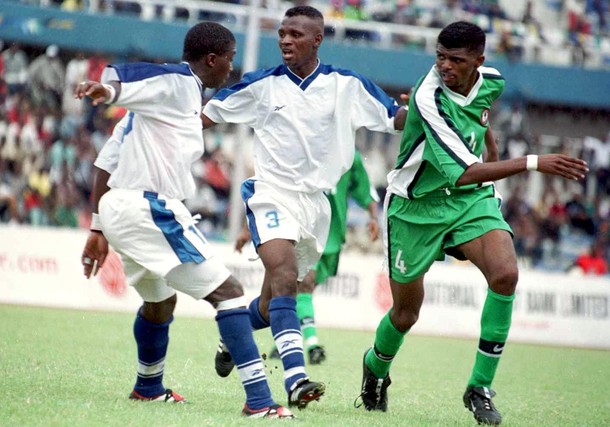 More details of Arsenal’s pre-season friendly in Nigeria have surfaced, with local reports claiming that the club’s opponents will be revealed tomorrow.

The Gunners confirmed earlier this month that Arsene Wenger’s side will fly to Abuja in early August once they’ve concluded their Asia Tour duties in Malaysia, China and Hong Kong with ‘a leading African national team’ pencilled for the pre-season clash.

DanJan Sports, a consortium of player and match agents whose website insists on playing Jack Johnson tunes when you visit (wtf?), claim tickets will go on sale on July 4 with the game scheduled for August 5.

“It was important to confirm Arsenal first-team squad’s arrival date. We have worked out ticket details and finalised the opposition.”

It appears that Arsenal have insisted on incredible attention to detail before agreeing to play Nigeria with a state of the art mobile medical centre being sent from the UK to the country ahead of their arrival.

“This mobile operating theatre is not only essential for the players but the fans as well,” continued Omigie.

“Considering the last incident with Fabrice Muamba, the lives of players, officials, fans and everyone involved is of great importance. Safety is paramount.

“In case of an emergency it can easily accommodate more than fifteen people, so we are happy to have finalised everything on time.”

Former Gunner Kanu is expected to play some role on the trip as an ambassador, while the club have further strengthened ties in the region by securing a sponsorship deal with Malta Guinness – Nigeria’s number one malt drink.

It’s non-alcoholic, which sounds a bit suspicious to Arseblog News, but according to Wikipedia (that bastion of truth) it does have a selection of intriguing nicknames including ‘young beer’, ‘children’s beer’ and ‘champagne cola.’

We look forward to The Tollington stocking it ahead of the new season.

In whatever you do, please don’t hunt my olivier.

We should just bring Abou Diaby’s medical team, and we should honour him by by naming our centre the Abou Diaby medical center.

Dempsey is the next

Giroud in, who is next??

Wenger well done 4 good work done,now who next fast 4 what u i doing.thanks.

i’ll have a word with Lou.

the most important info should be how much the ticket cost. so that we average (poor) nigerians can start hustling for the money. God save me if i dont engage in something bad to get the money. gooners in my area are ready to forgive the government (thieves) of all their usual corrupt practices if they can somehow sponsor free tickets for us. we will consider it as a fair compensation for all the pains they’ve caused us over 45years. heaven i need a miracle cos if i dont watch this match being played in my own backyard i might… Read more »

Quite excited about this. I really hope everyone gets adequately vaccinated and come back for an awesome season malaria-free.

Malta is very nice U can but it in Tescos in London.

I dont know if these are Nigerians or trolls…

What about the security? Isn’t Abuja like Boko Haram territory? There’s almost daily news about bomb blasts in the region and it doesn’t seem like authorities there have the capability to prevent that shit. I’m not convinced if this Nigeria tour is worth the risk at this moment in time. Why not a safer destination until the situation in Nigeria gets better? I really hope the club knows what they doing.

Just like when the IRA bombs were blasting England and everyone stopped coming to England???? Yah!!

The news you hear is deep in Northern Nigeria which is about 3 hours by airplane or 18 hours by road from Abuja.

I’m English and I’ve lived in Abuja for 14 years so I can say with confidence that it’s a safe city.

but to be on a safer side, the match should be played somewhere in the south of nigeria. cos even the boko haram goats know they dare not bring the bombing down south. else there will be outright war shout out to my boy @goldjosef, saw ur post!

no one is speaking chinese here…huh??

Pls let d insecurity situation in nigeria nt deter u from coming to nigeria…arsenal fans in nigeria are just so much nd like me am sure they won’t protecting their heroes with their lives. Gunners for eva…I can’t wait

God Bless The Entire Arsenal Team. Hope RvP’s gonn’ be comin’ ? I can’t wait to see Prof. A. Wenger. l pray I won’t be having exams then. Please letz know how much the tickets would cost….and I also pray itz gonn’ be a safe tour for them…..no fears of #BH