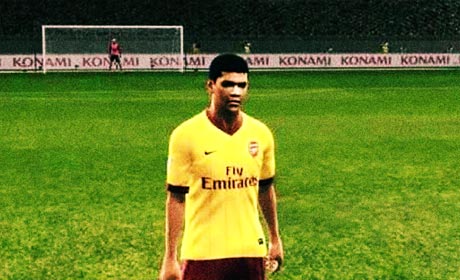 Denilson Pereira Neves is set to return to London with his tail between his legs (as if there was any other way).

Despite some bold talk a few weeks ago about wanting to return a “champion”, Denilson’s  São Paulo were humbled 0-2 in the semi-finals of the Copa do Brasil by Coritiba. There had been talks of extending his loan deal by the fortnight in the event of  São Paulo reaching the final (since the final fell outside the loan period), but this moint is now poot.

The hike begins. I do not know what to say now. It’s hard to say this now because I wanted to come back with a title.

If you had any funny ideas about Denilson staying on at São Paulo, then read this quote from the wonderfully/horrendously named club president Juvenal Juvenicio:

Arsenal want €6 million for him, but we won’t pay that so we expect him to leave soon. Of course we will try to get the loan deal extended for another year, but it won’t be easy.

Clearly the club aren’t keen on loan deals and would like to get these kinds of players off their books, but they certainly aren’t going to negotiate easily.

If they’re asking for €6 million for Denilson, and €8 million for Vela, then who knows what they want for Arshavin, Bendtner and Chamakh.

Almost like the 6 million passes he might have provided that never culminated into goals. We already have an overcrowded midfield so it’s better to do business with “stupidiest” bidder.

To be honest, Arshavin would be in and around vela’s valuation. Vela should be worth easily 8-10 mil. Young and full of potential and has good record at Sociedad for last season while Arshavin would virtually only have 2-4 years left.

At the end of it all, its all still early in the summer. Don’t rush the sale nor purchase just yet. Some stupid club could the amount we wanted. Who knows the newly rich Monaco could have a go at Denilson? 😛

in my opinion €6m is too much. around €4m should be fine. at least we will get money rather than nothing.

Dwangoon
Reply to  why is my name required

Denilson – €5 million
Vela – €10 million (young, talented, had a great season in Spain, could easily become on of the top strikers in La Liga)
Bendtner – €8-10 million (if he was more humble, then people would appreciate him more, but he’s still a good player)
Arshavin – €6-7 million?
Chamakh – €4-5 million

Am I being too optimistic?

Denilson – A new hat for Gunnersaurus and a bag of chips.*

And if we’re talking about this Denilson pictured above, I say keep him!! If my Master League career in PES is anything to go by, he will be an absolute monster by the year 2015. Trust me.

All these players on great contracts that we don’t want but can’t get rid of and yet we have rvp, walcot and song with a year to go on theirs. Well done Ivan.

yeah sure. 2 seasons back, i bet alot will be furious if we offered rvp,walcott and song long term contracts. I still remember people going Song can’t play DM, he is not Arsenal quality or “omg, why offer RVP long term contract when he is particularly injured all the while, time to let him go”

You risk some but sometimes you missed some. Hands up among you who wanted rvp/song/walcott a long term contract 2 seasons ago.

Walcott is crap. He only turns up every fifth or sixth game. I would love to see him go and be replaced by a genuine quality winger like Arjan Robben.

And Wenger’s problem is that he hands out the big contracts too early. If he just waited he would have realised that the likes of Bendtner, Denilson and Vela were not worth the big wages.

Robben? are you kidding me? What do you see in that guy?! In all honesty, I’d rather walcott to him. I have seen alot of Bundesliga and he is just way too selfish for my liking. He is just not what he was when he was at Chelsea. Well that’s my opinion.

the only word regarding Robben that should ever follow the word “genuine” is “cunt”.

Robben? You’re being a satirical rogue, right Fats? No doubting his ability, but if ever there was a major clubhouse cancer, it’s Robben.

In all fairness Robben is a good player….if he plays by himself.
Which doesn’t happen.
I see only a more technically gifted and aged-looking white Dutch Sturridge.

I bet you’re also one of those people who moan about players leaving on a free because they’re *not* tied down to long-term contracts.

It’s difficult to know for sure if a player will turn out to be a Denilson or a Dennis, so the club has to take a chance one way or another. Childish grumping about the ones that didn’t work out doesn’t alter that fact.

Honestly fatgooner is all fat and no brain. Either that or the fat is suffocating his brain.

I wouldn’t pay more than €2 million for Denilson to be honest. Just take the money and be done with it.

And you could find a better player for less than €2m, and on half the wages!

I would be really interested to learn the loan fees and contribution to wages paid by the loan clubs. I’m sure fans would be a lot happier about the “Arsenal Loan Acadamy” situation, if Arsenal were making some money out of it.
You would hope that Arsenal are making more money by loaning a Denilson, Vela or Bendtner out for 2 or 3 seasons, rather than accepting a pawdry fee just to get rid of them.

Juatanotherguy. Your right of course, but then someone at the club has clearly made the wrong call in that case, and gambled with long contracts on the wrong players. My job as a fan is to support the team which I do by buying my season ticket every year.
The clubs Job is to give the right contracts to the right people and of late they have got it wrong simple as that.

Sometimes, this players just won’t want to extend the contract. You offer them big contracts but they still decline.look nasri. We got it wrong to me is-denilson. others the contracts are running down. bendtner has talent, well he is just a erm cunt. I agree on the part where we are wrong is the middle wages. Our middle wages are skewed and there doesn’t seem to be much difference between the top tier to the medium tier. We did offer all 3 of them long term contracts at the start of last season but they decline. Just when we started… Read more »

Just in case anyone thinks I am suggesting this players are leaving for money, I am not. But I understand if they do. I would do the same if I know my marketability I would want the best deal offered. As for rvp case, I do think he is stalling to ensure a)Arsene buys the players that can support him and b) gets the best deal .

JAG………nobody knows who is paid what as there never have been and are not now any official or accurate figures for compensation packages paid to our players. For those like Fatgonad and his Anti-Wenger ilk, who maintain that AW made erroneous decisions about compensation for mediocre players etc., Gazidis and the BoD have repeatedly stated (on the record) that it isn’t solely Wenger’s decision that determines who gets paid what but rather that he is obliged to work within a compensation budget that the BoD have authorized and there is a scale used to reward success, etc. Nobody on any… Read more »

Juvenal Juvenicio? Are you fucking kidding?
Is he friends with Cheeky McCheekington and Naughty Naughton?

He knew Bigus Dickus quite well.

Yes, and his wife, Incontinentia.

im afraid sao paulo wont even attempt to negotiate once they hear our offer.

Somebody should make a compilation of Denilson’s best moves and publish it on YouTube with title: “THE NEW XAVI!!!”. Then Arsenal would just have to wait till Mancini sees it and post an info that Denilson is not happy with Arsenal because he wans to win cups. Think that 15 million is achievable.

“His best moves”? We’ll have two hundred and fifty clips of him shaking hands with the opponents at the start of each game

Are we talking about his bowel movements or maybe his intercontinental adventures, or perhaps his best moments when not at Arsenal?

Great idea Duff….we could photoshop his head onto Iniesta’s body and try and convince Mancini that he was loaned out to Barca last season?

We appreciate you that beautiful entry, and I anticipate to proceed presenting beautiful and also intriguing, notable and I am hoping a lot of fine posts which might be positioned on this blog amazingThe ensuing popularity of the game makes a PES 2012 review not only necessary but also helpful for those who are interested in the game.