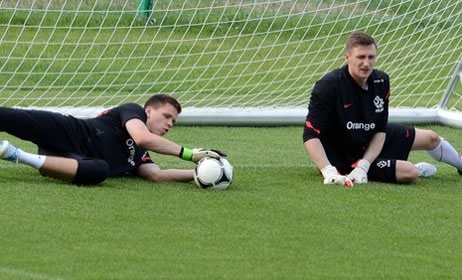 Poland manager Franciszek Smuda has confirmed that Wojciech Szczesny will return to the side for their crunch final group encounter with the Czech Republic.

Szczesny was suspended for last night’s 1-1 draw with Andrei Arshavin’s Russia following his sending off against Greece in the opening game of the tournament. His replacement, Przemyslaw Tyton, made himself a hero saving the subsequent penalty with his first touch, but the Polish manager has enough faith in the Arsenal man to restore him to the side straight away.

“Wojciech Szczęsny is our No1 goalkeeper and there is no doubt about that, so there is a chance that he will return for the next game”, he said.

Meanwhile, Arsene Wenger has claimed that ‘psychological’ issues prevent Lukasz Fabianski from realising his potential. Speaking in the Polish press, Wenger said, “Let me surprise you: Łukasz Fabiański could become the best goalkeeper in the Premier League, even better than Wojtek Szczęsny. He has incredible skills and dynamics.

“His problem is psychological – he relives his every mistake or bench time. I was hoping that Euro 2012 might help him; his injury is a great misfortune.”

It is well known that Fabianski has been unable to translate his impressive training ground performances to the first team but it’s interesting that the manager has made it so abundantly clear that this weakness exists, especially when Fabianski has made it clear he’d like to leave the club this summer.

However, hopefully the comments about his raw talent will be enough for any potential suitors to make their moves. The situation is complicated by the shoulder injury he picked up just before the Euros so any deal would hinge on that clearing up.

Cheers to Matt at Gunners.com.pl for the translation.

Get on with it you good lad you!.

Surely thats like saying I could be a sprinter if I was fast. If Fabianski is that messed up psychologically he will never make it at a a top club. I hope he does go on to have a solid career though.

Szczesny what a guy. Hope he does well and saves lot off balls!

why would you want him to have to save anything with his balls?

What are the chances of poland facing england? How i would love to see Szcz kick racism out of his country, hard on the head like Diaby once did.

So he’s the polar opposite of NB52 then…

Arsenal should pack Luckasz off to Paul McKenna to hypnotise him into staying calm when in a competitive game.

Szczesny went for counselling sessions to help him focus his mind on his game. I’m not saying Fabianski isn’t committed or anything, but he should change his attitude towards the game if he wants to see more game time anywhere. Reliving your errors is never a trait you’d want in a footballer.

Good for him. Can’t question his dedication for both club and country. I find it funny that his mistake led to a plethora of abuse on Twitter/media about Szcz ability and Arsenal’s ability to spot/train a talented keeper. But when Cech made mistake yesterday, they said he was carrying an injury.

Great goalies have big personalities and are psychologically strong. Wenger’s comment reminded me of Walcott, a bit like being a winger is only about being fast.

Woijech is my favorite player on our team. I’m serious, I might buy a keeper kit this season. I love the kid. He’s a fucking monster. 6’5, insane reflexes, big personality, takes no shit, yet not a cunt like Hart. Count me in for him.

Love Szczesny! What a guy.

Honestly Wenger needs to let Fabianski go. If he has such huge mental hang-ups he either needs a fresh start in a new environment to hopefully help him with his problem or he needs to become a coach. If he can’t get past his mistakes he’ll never get better and never realize his potential.

[…] Tyton (sounds like some kind of metallic superhero, no?), has done pretty well. The Polish manager hinted he’d bring Woj back but we’ll have to just wait and see with this […]