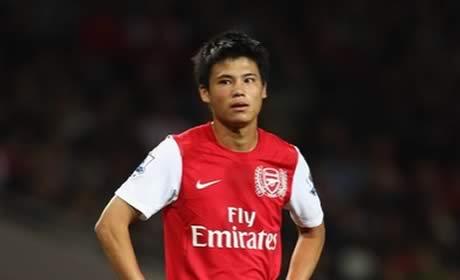 News from Holland this morning suggests that Ajax are interested in taking Ryo Miyaichi on a season long loan.

The Japanese flyer has been linked with a move to Premier League side Norwich and perhaps that would be best for his long term development in English football, but the idea of him at Ajax is an interesting one.

Miyaichi previously spent half a season in the Eredivisie and impressed during his time with Feyenoord, but working closely with Gunners legend and now assistant manager at Ajax, Dennis Bergkamp, would certainly be an exciting prospect.

Whether the links between Wenger and Bergkamp, along with Ajax’s style of play, are enough to make the deal happen remains to be seen. Arsenal may want to the youngster to stay in England to ‘toughen up’ but the tutelage he’d receive in Amsterdam could prove just as valuable. The issue could be complicated by Ryo’s need for a work permit to play in England.

Miyaichi is due to go on the pre-season tour of Asia where he’ll get a chance to impress the manager, but a loan move, one way or the other, looks most likely for the season ahead.

great news. take Dennis with you when you’ll be returning!

Ryo is one that I am really excited about for the future, last sprint test he MATCHED Walcott! From what I have seen ryo posesses more overall play and ability to beat players than Walcott (from his Bolton highlights) I feel ajax is right for him this season as he will get europian experience too

You don’t even need to see the stats to know how quick he is, just watch the way he eats up ground, it’s frightening.

I’d prefer him to go to Norwich over Ajax, even with the option of him working with Dennis, after all he’ll ultimately be playing in the Prem with us rather than the Eredivisie.

Who needs Walcott, we’ve got Ryo!

And we’ve got Chuba Akpom who has just scored against Boreham Wood. Not that I know anything about him but Chuba Akpom’s a cool name.

Get him some little dennis type flair, bring him back when he’s more mature, rips apart defences
Hmmh, sounds fair.

Perfect place for him, but losing the home-grown status must be something we really don’t want? If it hadn’t been for that he would surely have gone somewhere a lot better and more congenial than Bolton last season where he only got a few games. Is he young enough to be eligible for the toddlers’ CL? If so, you think we could keep him for that and the Carling and then, depending on how he’s looking decide on whether a loan for the second half of the season would be the best thing. If Walcott goes and we’re decimated by… Read more »

This is true. The whole point of bringing him over to England before his 18th birthday and keeping him here was to ensure he had homegrown status (just like Johan Djourou and Vito Mannone, our other designated Englishmen).

“The issue could be complicated by Ryo’s need for a work permit to play in England.”
Didn’t he receive an exceptional talent work permit last season already?

Yes, I think so. The issue isn’t that he hasn’t got a UK work permit – if that were the case he wouldn’t have been able to play for Bolton last season – it’s his home-grown status that’s under threat if he goes on loan to a non-English club. This is fairly vital to us if we’re to have him in our squad for years to come without him counting as a ‘foreigner’. That’s why he had to go to an English club last season when Ryo himself would probably have preferred to be in Holland or somewhere better for… Read more »

Firstly he has a permit. secondly the rules of his permit are that if he works outside of the uk the permit is rescinded. i remember categorically wenger stating when ryo went out on loan last time that it must be in the uk

He’s second best striker on the team behind podolski on my FIFA 12.

can’t see this happening. 1) it would be a big step backward in terms of the quality he would face on a weekly basis.
2) he proved at bolton that he has prem quality and could get another loan in the prem easily as his wages are low.
3) they aren’t going to do anything that would effect his hard won work permit.

someone give me choice between playing under some holland legend and God at one of the most famous club in the world reputed for his world class academy and youth developpement while playing champions league match or lower PL team, i take AJAX everytime sorry

To be honest, I’m a little disappointed. I keep expecting him to come up to the big club.

While it would be cool to see him go to Ajax, it would be best if he went to a club like Norwich, for three reasons. 1) he’s going to be playing in England, so he best get used to it, 2) he’ll be more likely to get more game time, and 3) playing for a weaker side in a strong league teaches you to defend and track back as an attacking player – this is why Arteta is so good in that department even though he was Everton’s number one source of creativity he had to be competent defensively.

He didn’t get much playing time at Bolton. If he has to go somewhere in England, my choice would be Wigan. Terrific manager who’d probably rate him higher than Coyle did and would be much more likely to help him play the right way. I really wish we wouldn’t send kids to teams that specialise in hoofing long balls up to a wardrobe. Lansbury similarly was underused and undervalued and I doubt his spell with Allardyce has made him a better player.