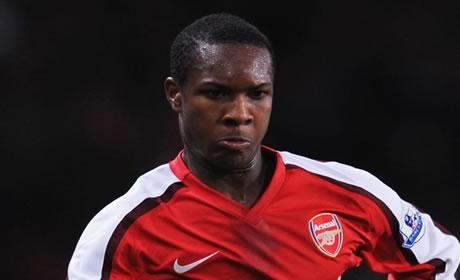 The brother of Justin Hoyte, who always looked to me like one of his grandparents was a crow, has left the club after loan spells at Brighton and Watford and some other places nobody cares about either.

He’ll join former Gunner Abu Ogogo at the Daggers. That’s a great name. Imagine if you were out with a mate called Lee and Abu Ogogo, having a few pints and a game of darts, and they all stayed over at your house. The next morning you fancy a hearty breakfast and Lee was the best the cook, you could wake Lee up before Ogogo.

Dagenham boss John Still said, “He’s played Championship football as well as at this level, he’s a local lad and the thing that impressed us most of all is that he had four or five options and he chose Dagenham.

“That speaks volumes, he wanted to come, we’re happy to have him,”

While Hoyte said some stuff but only to Dagenham Player and we’re not subscribing to that. Anyway, it’s a sad day, the end of the Hoyte dynasty at Arsenal and good luck to the young man at his new club.

the comment section should be “insert your own caption” competition

They better have consulted van Persie before they made the choice to get rid of him…
After all, he is our Transfer Consultant, also he is very ambitious, dont forget he is the Assistant Coach and Chairman, he is also very ambitious.

Did I mention he was ambitious.

What if rvp does a rooney and stays?.
What then?

if he stays, then we have a laugh about the whole thing!

van persie initiated the saga.the club’s initial reaction is right.the fans reaction is right.now we have to wait for further announcements from van persie and the club before coming to a conclusion.who knows maybe van persie was trolling.anything can happen in football.whatever happens we are behind the CLUB.
right now our only concern should be that the saga ends quickly because if it doesn’t it means there is something wrong and we don’t want another summer like that.

I actually met his grandmother once. a big old bird as black as the ace of spades always sticking her beak in where it werent wanted. The grandad always thought it was funny to scare the old crow especially if she tried to nick his corn flakes.

The “wake Lee up before Ogogo” is priceless!

took me so long to get… sigh

as soon as I saw the names mentioned I guessed the joke. And I liked it. A lot.

You deserve a slap for the wake lee up before agogo line.

” who always looked to me like one of his grandparents was a crow,’

Thats the real gem there. lol. Tho he looks more like a turtle.

Dagenham and Redbridge………sounds like a dark cave for crows. *shivers

So he’l fit right in.

for once I thought Dagenham and Redbridge are casts from jk Rowling’s books..Harry Porter maybe..

Anybody know if giroud and poldi trainned with the rest of the squad today?.
So fucking excited for the new signings, can’t wait!!!!!!.

Players from the euros have not returned to training camp.

Do we get anything out of this deal??? Lol

From the Gunners to the Daggers? Anyone seeing a pattern here?

yep, we’re their feeder club. have that u scitty cunts. dag&red usurped you. ha!

Gav recently had twins so he’s got to work hard, a lot harder than he did at Arsenal to make sure he maintains his football career.

Dagenham and redbrige? What a name for football playing club,should be a rugby club or a kungfu club…don’t know how the Hoytes always makes it to the reserves but never as a regular they just aint topclass…and if rvp does a rooney i’d be suprised and wont be happy except of course if he replicates his last season form.

For me he’d have to lick every fans bum for a year, and score 30 goals again

You can have my turn.

I love both of these comments.

I’ve given up on humour.

Q. What did the penis say to the condom?
A. Cover me im going in!
Still nothing?

The Hoyte brothers are a sad story for me. Could have been really awesome if they both broke through, two brothers being Gunners and coming through the ranks. But life goes on, best of luck to Gavin

They are one hell of a brother,those two.*SMH*
what did you call the name of the club again it looks and sound funny

Great, so now we are a feeder-club to Dagenham to? Ogogo…

I want you to know I stood up and clapped for 45 straight seconds after the Ogogo joke.

He ain’t plannin on runnin’ slo-mo.

Like his brother, he never really reached the hoytes expected.