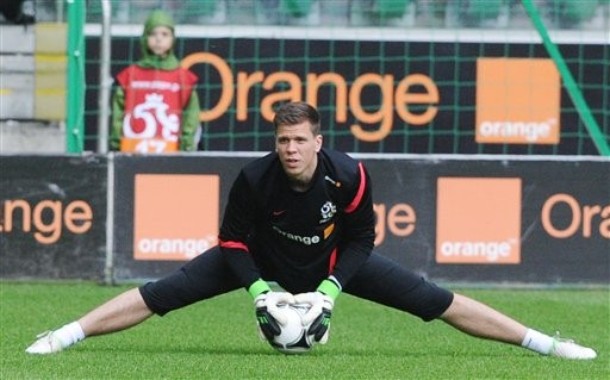 Wojciech Szczesny has given his backing to skipper Robin van Persie as long as he remains an Arsenal player, even if the world and his mother knows that there’s about two chances of the Dutchman playing for the club again.

Speaking to local journalists when Arsenal players made a surprise visit to a Malaysian school, the keeper said, “Listen, he is still my captain. It’s obvious everyone wants him at the club. He’s a great captain, he’s our leader. He was fantastic last year, probably one of the best players in the world.

“And as long as he’s with us, we’ll support him all the way.”

Yet Szczesny is wise enough to know what’s what and said whatever departures the club oversees in the next few weeks, it wouldn’t prevent him from giving 100% for Arsenal.

“I think you have to deal with the situation you’ve been put in. If anyone leaves, you just have to do your best for the club. I love the club with all of my heart, and whoever I play with, I will do all my best.

“Obviously I’m hoping no one will leave this summer, but I’m sure if that happens, we’ll still be strong enough to compete.”

With rumours growing about the capture of Spanish international Santi Cazorla, along with the signings of Giroud and Podolksi, perhaps there’s a feeling that even losing a player of the calibre of van Persie wouldn’t be as large a blow as some suggest.

Despite Arsenal’s terrible summer of 2011 when we lost Fabregas and Nasri, we actually improved our final points total and league position last season. Obviously there’s still a big gap to make up on the Manchester clubs, but losing big name players doesn’t always mean the team is going down the toilet.

Good lad. We need guys in our team who’ll stand by the captain… well atleast as long as he’s still captain.

What's my name?
Reply to  CLVNGNR

yeah that’s the spirit.RVP looks lost.
there is no point in abusing him when he is still with the club.let us try and get behind him for a week.maybe he’ll realize how disgraceful he has been.atleast he will feel guilty when he leaves us.
keep the faith gooners.beyond all the agents,cockroaches and mercenaries there is still hope in football.

I’m really hoping we get to play against rvp next season. I’m sure we’ll get Frimpong to do some damage!

Or Gunnersaurus, I’m sure he’s a mean shot with that t-shirt firing cannon of his

Even if he’s on the bench, we’l find a way to knick his ass. Say a coq tackle that mysteriously dangles rvp away from his seat.

Okay so i’m quite excited for todays match, would be interesting to see how we line up. Top dollar on santos scoring.
And blogs, post-match report please.

“And as long as he’s with us, we’ll support him all the way.”
Also known as “leave and your dead to us”

Is it me or do we at last have some players that love our club and its manager ?

About time to. Hopefully we’ll get rid of the ones that don’t care about the club, who just want the pay cheque and keep brining in players who want to play for The Arsenal.

We do/did. My opinion is if you win things, your players can’t get distracted and if it happens when your winning. We are not winning. It happens to other clubs all the time, what makes us so special?

Pity RvP didnt make his way here. I was ready to introduce him to some local fruits. Still, will be great to see the kids at work and Vermaelen outjump our smallish local strikers by not jumping

We have to play Citeh in this tour of Asia I think.

Move will happen after that, for obvious reasons.

Don’t think the citeh match has any bearing on the RvP situation, as the player isn’t around to be abused / enticed by various sets of fans.

despite wanting to leave, I am begining to wonder if Arsenal have mysteriously dicovered a backbone – was in the same place as Diaby’s broken body! – and might actually keep RvP to his contract if the money offered isn’t good enough to be financially relevant vs. CL qualification.

Possibly. But they all say that …http://tinyurl.com/c8xyxmm

Van Persie needs all the support he can get. Does nobody want him? Juve can’t much; Fergie doesn’t, he’s just been pretending, either as a favour to Wenger to raise the price and/or to irritate City. I’d guess the unfortunate Van Persie is feeling extremely unwanted right now. He must have been expecting at least a tiny bit of interest from Barca or Real, just out of politeness. Then at the weekend – imagine it! – Milan were linked with TGSTEL. Well, no, but it can’t have been a nice thing for Van Persie to read. He put City third… Read more »

Poor TGSTEL too. Such is the hopelessness of him no one has even bothered to comment on the last line of the Guardian’s Cazorla article which reports that he’s currently in talks with Galatasaray. You never know, really you don’t. Surely the fact that he’s now appointed a real agent in place of his dad is an encouraging sign, suggesting that reality is beginning to dawn? Hopefully the new agent has made him see the sense of lowering his sights and taking a wage cut? Well, I shall clutch at this straw.

i think by now arsenal fans are tired of van sage, let him go fast such that we can get his replacement befor the transfer season end, back on sszesny, he is right because thats what he was suporsed to say

Show ambition, keep RvP. Get rid of the deadwood to free up wages money and raise a decent (ish) amount from the sale of a number of them and buy from that.

Who is this “Podolksi”? YET another signing ?! I never heard of him but he sounds sexy and lethal!
Keep them coming Wenger!

Hope Benik gets a chance today.

Is SZCZ is wearing the no.1 on his jersey?
(look at the pics)
http://www.dailymail.co.uk/sport/football/article-2178150/Arsenal-Malaysia-tour-Fans-greet-Arsene-Wengers-men.html?ITO=1490

About time! Not that I’m superstitious but him wearing that # 13 jersey was a bit dodgy…

i dont care where van p goes, he’s the past

i just want us to squeeze the maximum possible money we can for him, if that means man shitty then so be it

I’d love to sell him at a loss to a team he doesn’t want to play for. Its worth losing money to see him playing in a shit league like China or even France with PSG. Fuck him.

but we cant force a sale to china or wherever if he wont sign the contract he means nothing to me now, i dont think he’s a creep like nasri, im just very disappointed with him all i care about now is that we get as much money as we can, and hopefully with a lot of the big clubs bidding against each other we can drive the price up pretty high if shitty want to continue paying crazy prices and wages to stockpile new strikers every year then thats their problem, they’re already stuck with crazy ones they cant… Read more »

Right so assuming he does have another decent season, you figure that more money is better, despite possibly helping our opponents?

i dont know whether he’ll have another good season or not, and our opponents have lots of other players as well.

all we can do is concentrate on winning our own games, we threw away so many points last year by defending like shit.

if we play well we can beat shitty in a head to head whether they have him or not – its up to us to play well and not defend like a bloody shambles!

Listen I know he’s been a bastard to us but he’s worth a bit more than £29 surely?

I love this man. Future captain!!!

You know, I got quite a few thumbs down here the other day when questioning Diaby’s importance to Arsenal, it could be the way I expressed it or just they wholly disagreed with me, but I decided to look at what we have and ignore any speculation of ins or outs. Well I’m actually happy out, we have a gk like Szcz who will only get better and better, we have a backline consisting of TV5, Kos and Sagna plus some pretty decent back up to suit, then a Midfield combo of Jack, Arteta, Song, resurgent Rosicky, then potential back… Read more »

No, you didn’t have to stoop so low
Have your friends write a letter
Asking for a change of team
Guess that I don’t need that though
Now you’re just player that I used to know

How many times have we heard players gush about their love for our club only to fuck off somewhere else when money is waved in front of them. Don’t get me wrong I think Szcez is a brilliant player who will no doubt give 110% for our cause. But if Shitty or Chelski waved £200k a week in front of him do any think he would not be tempted. Thats why we will always struggle to hold onto players like Van Persie whose only goal now is to make as much money as he can in the 2 years as… Read more »

as long as rvp is with arsenal he is still our captain and the finest player in the prem so till then its RVP TILL I DIE!

Is that how you would want your captain to behave. Don’t get me wrong, I have always admired Van Persie cos I thinks he has been a great player for us. It’s just a shame he hasn’t behaved like a Captain in the last few weeks. All this bollox about the clubs direction, policy and not winning trophies  is just a smoke screen to mask the fact he wants more money than Arsenal can or will quite rightly pay an injury prone player.  £130k a week with a £5m signing on fee is more than generous in my eyes.  If… Read more »

In ten years, outside the emirates there will be a 15 ft bronze statue of this man ……. He is going to be a legend……..

For delivering what exactly. How many trophies did Henry and Adams deliver before they left or retired. Those ate true legends. Van Persie is not fit to lace either of their boots unless he stays and deliver us the premiere league or Champions league before he retires. Then and only then he might just deserve some sort of commemoration. DB10 did more got Arsenal than all of these put together and he has even got a statue… We just rename one of the piss pots after RVP then I would take great pleasure relieving myself before during and after each… Read more »

I believe he was referring to a Szczesny statue and not RVP. Could be wrong though.

With talk like that about how he loves the club, let’s make him captain and sell him for £30m to Barca next year!

Im even dubious and reserved with loving the great szcz, becoming too attached to boss man kos! Who knows which one could betray us down the line. Im all about the badge on the front not the name on the back. As for cazorla; didnt he just go to malaga for lucrative money? Doesnt sound like the correctly driven mindset id like to get fighting for this club. He’ll prob just boost for better money eventually