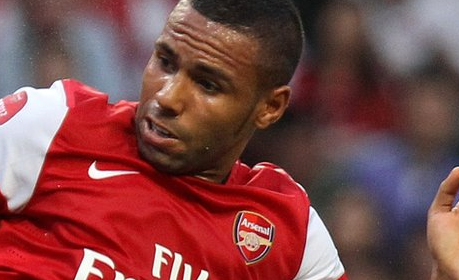 Kyle Bartley confirmed last night via his Twitter account that he had completed a permanent move to fellow Premier League side Swansea City in time for the new campaign, and although the timing of his departure is a little surprising given that he was only recently promoted to the first-team squad, the move looks to suit all parties concerned.

Bartley, 21, had, despite his promotion, only been promised limited game time at Emirates Stadium this season barring a substantial injury crisis and found himself behind four comparatively experienced centre-backs in the pecking order at the club. Having only managed to make one competitive senior outing during his five years at the club, spending much of that time on loan at Sheffield United and Rangers, this move seems like the perfect opportunity for him to prove that he is capable of performing regularly in the Premier League.

Whether he will succeed in doing so remains to be seen, but in the long term it was highly unlikely that Bartley was going to make the grade at Arsenal. A commanding centre-back with a strong physique, he is often rash in his decision making and, at the highest level, such mistakes do not often go unpunished. His departure does mean another Academy graduate has failed to carve out a long-term career at the club, but Bartley will still be hoping to follow the likes of Sebastian Larsson and, before his cardiac arrest, Fabrice Mumaba, who went on to establish themselves as Premier League players.

Speaking of Bartley, his former club Bolton Wanderers will provide Arsenal’s first opponents this week in the newly formed Premier U21 and U18 leagues. The U18s travel to face the Trotters’ at their training ground tomorrow morning, whilst the two sides will also meet in the more senior age group at Emirates Stadium on Monday evening.

The latter fixture should provide the opportunity for some of the club’s supporters to witness the highly-rated members of the current crop in the flesh, with Serge Gnabry, Hector Bellerin, Kris Olsson, Jon Toral and Chuba Akpom all set to feature at some stage. The U18s meanwhile, will be fielding a new-look side, likely to be primarily composed of the new intake of first-year scholars.

Akpom is likely to be kept in reserve for the U21s, but promising central midfielder Jack Jebb could feature, with attacker Austin Lipman and left-back Brandon Ormonde-Ottewill other players to look out for.

It promises to be a busy next few weeks for the youngsters, with another U21 fixture, against Blackburn Rovers, to follow at Emirates next Saturday, before the NextGen Series, which pits the young Gunners against the youth sides of top teams from across Europe, gets underway at the end of the month.

I wish him all the best, this deal works out well for him and the club. As for him not making it as an academy graduate, well I think thats moot, you either make it or you don’t, no one is on a promise.

Nice career move.
At 21 and ambitous as bartleys’ letter suggests you Just have to move on and get more play time. Good luck.

fair play, i reckon swansea will be good for him.

Good luck to him. I like the way that he has shown ambition by moving to a club that will guarantee him first-team football.

Is it just me or does ”Akpom” really remind you of a certain purple monkey Pokemon. *chuckles*

God I need to grow up.

I would still have liked him to go on loan in the Premier league this season and then be assessed. Oh well, good luck to him.

I think he was looking too arrogant, at least in friendly games, thinking he knew it all, and didn’t show the determination others have showed. That said, he’s got the talent and physique to become a good player, and I think the move will benefit him in the long run. Best of luck

Like Ozyakup he’s a player who feels he is ready and wants a definite first team spot with lots of playing time. I wish him luck and think he’ll do very well with Swansea.

Unfirtunately these players now seem to be in such a rush to hit the first team. You see players like koscielny only really making it big at 24 yet for some reason others want the same at 21 or like ozyakup even younger. it takes a special player to become a regular at a top 4 club before he is 23 let alone at 19 20 or 21. the fact is when everyone is fit the likes of bartley lansbury ozyakup eastmond and may be even ramsey dont make the 2nd x1 let alone the first x1 szcesney sagna mertesacker… Read more »

And our second XI I would hope to be: Szczesny / Jenkinson / Santos / Mertesacker / Djourou / Diaby / Ramsey / Oxlade-Chamberlain / Gervinho / Rosicky / Chamakh.

And in all honesty I think we need to strengthen that second XI with two or three.

Good luck to Kyle. Swansea are a great club, they’ll look after him there, and he’ll have the games to develop into a good premiership centre half.

fact is the young players at arsenal know the club is a feeder for bigger clubs and if you arent close to the 1st team by 19/20 then you need to move to get games. the club is know selling Song who is 24. You cannot wait unitl you are 21 as you wont get a squad number. The club is killing the proper academy players but is happy to buy in Jenkinson and AOC from league 1 clubs. Only foriegn imports are given a proper chance to get 1st team games eg Miguel.
F…g calamity

because miguel is much better than bartley, maybe thats why miguel is keep and not him…look and for giving chance at foreigner instead english one….theo come to mind,,wilshere,gibbs,frimster,ox,yennaris. Simple impress the boss and you will give the chance