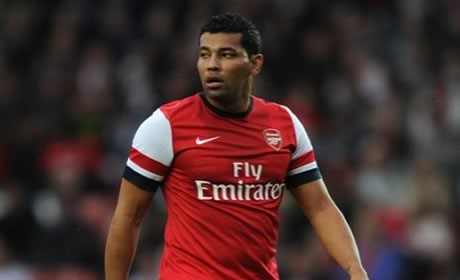 Fish and chip loving ‘left back’ Andre Santos says he’s hoping a good season for Arsenal will see him return to the Brazil national squad.

The former Fenerbache man has made 22 appearances for his country, and he’s looking to add to that in the upcoming season.

“My goal is to return to the national squad,” he told Rádio Bradesco Esportes FM. “Today, playing in a big club like Arsenal, having a good run and starting the year well, I do not see why I won’t get a chance. Mano Menezes is a coherent person, he looks at everbody’s form and gives a chance to all players.

“He calls those who are better at the moment. I, playing well, think I deserve this return.”

Obviously the cuddly maverick is tearing up pre-season but maybe the Brazil manager might want to wait until the season starts before he makes any decisions. Either way, Andre knows that after a difficult first season he’s got to step up.

“The injury last year hurt me a lot,” he said. “I was four, five months out of action. My first year was an adaptation, now I’m very suited to England and the team. I look forward to a great season. I’ve learned a lot about how I should position myself on the pitch in this last year. I’m fighting for a place with Gibbs, he’s excellent.”

And he eventually sees himself making a return to Brazilian football at the end of his Arsenal deal.

“My goal is to stay and fulfill my contract. At 32 years of age, I believe I can play at a high level. I’m going back to Brazil, yes. Of course we do not make a prediction about the team because we still have time. I would give preference to teams that I have played in, like Corinthians which is the team that I support.”

For now though we await the stabby tackles and the forays upfield as the new season edges ever closer.

it will be a sad day when this gay returns home

Thats wat we all want for u Andre

Hope he makes it in to brazil team, if he does that means he,s playing shit hot for us ;D

For a minute I was shocked he was 32, then wikipedia calmed me down and I realized he meant his age at the end of his contract.

By age of 32 all Brazilian footballers usually weigh a stone per year.

He sure as fuck has got more brazillian flair than marcelo. Don’t see why he wouldn’t get a chance though I remember menezes’ comments about santos and then I start to understand why. Don’t be a stuck up menzes. Santos is the man.

This gay deserves a call up

Hey!!, I get to say when and if the jokes are getting old.
Hola brasil.

I heard they’re making a comeback, like the 80s did.

Every time santos disposseses an opponent I jump up in joy just like I did when he scored the west brom goal. That’s how much I love him.

Gays, these ‘gay’ jokes is outdated!

I played jenga with Mohammed Ali and won

Heh! Says everything we need to say about this cuddly gay. Cannot wait for season to start.

Gibbs and Santos in competition – sounds like one of them “good problems”.

Heh, I can Imagine Vermaelen and Frimpong boarding up spurs players in vacant houses in Hackney

don’t go Andre. Never go.
I always have a soft spot for our Brazilians. Well, the good ones anyway (Gilberto Silva, Sylvinho and now Andre).

Just heard Van Purs E has left the tour and is flying back to England for talks with Man U. Surely they cant seel him to an English club

where did you hear that then?

Yeah, read that too. He’ll be a devil, make no mistake.

I thought the person who started that rumor on twitter admitted it was just a joke?

ah, thought so. The fucking Twattersphere. So glad I’m not on that shite.

So glad I follow real people with real credibility.

I fret that whenever someone goes on international duty that they will come back in bits and pieces.

‎” Believe nothing you hear, half of what you see, and everything you feel.”

omg I’m definitely in love with van persie what do I do!?

Yes even Im sick of them you muppets

…….Im really sick of them too!

Guys I saw Andre the other week in camden, called him a gay and he got pissed off wanted an autograph but he was too fucked off.

Guys, I think we should stop.

True Andre, if Arseblog was around when I played for Arsenal and I could see how many muppets supported us like Merlins Panini and Fatgooner I would have fucked off to United too

What’s a panini ever done to you?

must have burnt his tongue on some hot cheese or something.

U can add yourself to your little hate list. Now shoo, back under your bridge.

Its just been on SS news. To see him in a United shirt would be worse than City. This is heartbreaking

The only comfort we can get from that is since RVP arrived at the club we have not won anything. He will plug up United while our trophies flow!

If it is announced then then it is, but until then it’s nothing. Worry is a waste of your time and health!

Best advice I can give is to ignore/not believe all mainstream news until it’s on arseblog.

While they should go hand-in- hand, your primary goal should be to win the league for Arsenal. If you are focused on that then obviously you’re playing well and should get a look at your national team. I realize it’s nit-picking but saying “My goal it to make the national team” sounds too Arshavin to me. What happens if you don’t make it? Do you get all mopey and quite trying like AA23 did when Russia failed to qualify for WC2010? International centric thoughts really irritate me when there’s a club paying your wages for you to perform for them.… Read more »

Agreed, if the day comes when your country and their supporters pay you £50k a week via a central contract, then international football can be your priority, until such time concentrate on your club. International football is such a bloody nuisance, even in the unlikely event of England winning something, I still couldn’t enjoy it’s it would mean watching Cashley, terry, Rooney and all the other dislikable twats being happy and feeling even more self important.

Considering that the only way players get considered for their national sides is by playing well for their clubs, I’m just gonna go ahead and present you with this “Hi! I’m a Complete Moron!” badge. Wear it with pride.

Of course it’s a secondary objective. He was talking to a Brazilian sports radio station, when he works in England and losing his position to Marcelo in the NT, of course he’d be asked this. What would he say? “I don’t give a shit about Brazil, I want to change my passport to the Arsenal, and they pay me.”?

but it was on Arseblog yesterday that Alex Song was pole dancing in Barcelona….Was he?

It was a lap dance, only it wasn’t Song who was performing it, it was Darren Dein.

for the Partridge fans.

Looking at this picture of Andre its refreshing to see a modern footballer that isn’t in perfect shape.

What’s this… A player actively seeking to fulfill his contract then give something back to the team/league he loves and made him. No, no, no, I don’t think you are cut out to be a footballer.

“I’ve learned a lot about how I should position myself on the pitch in this last year. I’m fighting for a place with Gibbs, he’s excellent.”

If I rmb well, Koscielny said smth like that after his first season with us. I’ll be expecting great things from you Andre.

Is “rmb” really an accepted abbreviation? I know you Brits use “smth” or something like that, but “rmb”?

(But I do agree with the sentiment.)

What the fuck is ‘smth’?

Nah I’m Asian mate. But as far as I know, these are pretty common abbreviations that we use everyday

I would remind folks that use of proper English is required at all times. No txt or lol speak or abbreviations, thanks.

With the obvious exception of abbreviations explained in the official arseblog glossary! (eg LANS)

Do you think the dig about his contract is aimed at others in the team. He may be the only gay in the village but I am proud he plays for us.

So santos wants to see out his contract and move for nothing. isnt that what rvp wqnts to do? i say lets treat santos the same way as everyone is treating rvp. obviously i dont want that but aside of a misguided statement isnt it the same thing? for years wenger has said that the bosman ruling will see the end of the transfer market as we knew it. well to some respext he was right it is a totally different market now as so many average players are available for nothing yet can command ridiculous wages. whilst the very… Read more »

I like the attitude. Maybe the lad’ll actually play some games this season. Hopefully him and Gibbs aren’t competing for first spot on the injury table.

I’m guessing, a couple of our last summer signings who had mediocre first season will have great upcoming season just like Kos did. Hope we’re gonna see a more improved version of Gervinho, Mertesacker, and Santos.

PLEASE SOMEONE TELL ME IS SANTOS REALLY A GAY??????/

He’s a guy with a gay personality that mikel likes.

He’s a likeable guy with a great attitude and can be relied upon to provide a bit of entertainment on the pitch. At 32, i ‘m only wishing we got him in sooner.

Is this the new Eboue? i mean the happy kind of gay the dressing room needs?