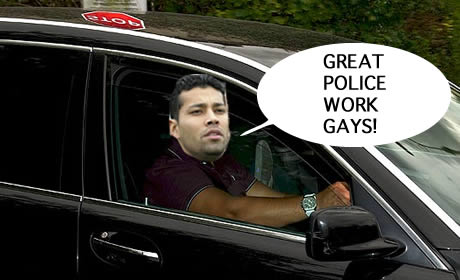 Andre Santos was arrested and bailed by police last Friday on suspicion of dangerous driving. The BBC reports that the Brazilian was taken into police custody and released to appear again at a North London police station in mid-September.

The police say, “Shortly after 9.30am on Friday August 17, a 29-year-old man was arrested on suspicion of dangerous driving and failing to stop for police on the A1, near to Junction 22 of the M25.

“Officers’ attention was drawn to the vehicle due to the manner of its driving.

“The man has been bailed to return at a date in mid-September to a North London police station.”

The Sun goes large on the more dramatic elements of the story, saying there was a 130mph chase with Santos weaving in and out of traffic before he was stopped not far from the gates of the Arsenal training ground in his ‘super car’.

They say he could face up to two years in jail if found guilty.

Without any further verified information than that provided by the police, it would probably be wise to take The Sun’s version of events with a pinch of salt, but either way it looks as if Andre has some explaining to do.

6 points and 6 month driving ban, worth come worst he will have to get one of the other gays to drive him to training every morning

Give him a bell princess, maybe you could give him a lift on your way to get your hair done, you old fruit : )

Santos do it again.You have my support.

The suns report is sensationalist shit, this is England, he will get 6 points and a ban if he is unlucky

Vick
Reply to  One

Driving offences do not affect people’s job
prospects unless you’re official job is to drive. Even then, he’s a first time offender and likely just to lose 3 points and/or a fine – slap on the wrists really. Tateezee

Can a art car go that fast or has he installed Nitros . ‘Super car ‘ my behind .

hmmm, im ever so slightly suspiscious of the validity of the photo provided.

I have. This one time I filled him up with washing up liquid and water and put a tennis racket in front of his mouth. It was a beautiful sight to behold.

the cuddly maverick.
Ok, that’s not a tennis racket. What can I say, I’ve done it to him more than once.

With the direction they are now taking……i’d like to make that 4 weeks.

I know it. I always know it. This is the handiwork of Sp*r fans in police uniform!! U can’t get away with it i swear!!!

Poor guy must have tried catching theo on his morning run.

Fuckin old bill, got nothing better to do than chase footballers driving at 130 MPH in their Maserati’s. lol

Watch out, we got a badass over here

So despite all this there’s still a guy in manchester who’s still a cunt.

Thomas B
Reply to  Tdjay

Thomas B
Reply to  Thomas B

Imagine If he does go to jail and calls his fellow inmates “gays”! :-O

[Santos to fellow inmate] ‘ey gay; Will you pass me the Soap

Poor Santos, I bet he got the shock of his life when he slammed his foot to the floor and realised he wasn’t in his Smart car.

“He drives how he wantssss, He drivesssss how he waaaanttttsss ..” Haha good old Santos, I guess he figures with Bendtner on his way out somebody has to assume the role as the crazy driver role in the team.

It’s times like this that I miss the News of the World.

Andre Santos’ wife is furious. “I told him to
look after the house. But no off he goes at
130mph, ignoring his defensive duties. Idiot!.”

Who was santos chasing?

I love that GAY and this is all wengers fault.
I mean come on who keeps telling him to play with the handbreak off 🙂

Aw shucks, how can i stay mad at you!

He should have just flashed them a winning smile, done a little jiggle and given them a hug and I’m sure they would have forgotten all about it.

Santos -“your honour,Mr Recorder,all you gays in the gallery,I’m real sorry but Nandos was about to close” (flashes big Brazilian smile)
Judge-“case dismissed”

Santos our speedy brazillian
He got chased in a car worth a million
He thought the chaser was a reptilian
So he drove at mph one billion
Then broke, narrowly missing a civilian
Found out it was a spud cop who looked like an alien…..

Thomas B
Reply to  ice

Vanilla Ice, is that you?

how I wish the 6 month time was true! it wud force wenger to get a real left back! the gay as a winger is speedier to swallow than a Maserati!

how I wish the 6 month time was true! it wud force wenger to get a real left back! the gay as a winger is speedier to swallow than a spud chased Maserati!

[…] & there was also the ridiculous André Santos as Ayrton Senna incident recently.  Come on, Sun, if it was as bad as you say it was (allegedly “130 […]