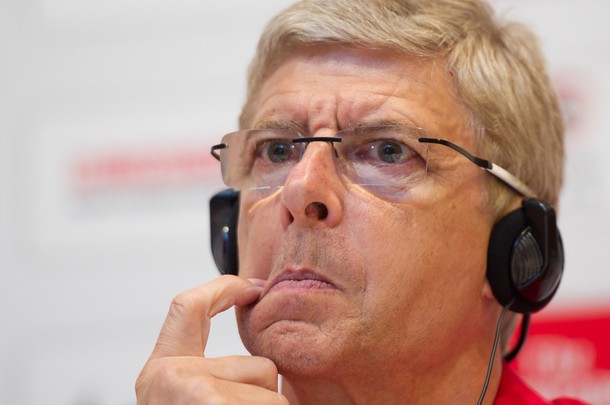 After the French midfielder limped out of Arsenal’s Premier League clash with Chelsea, Arsene Wenger appeared to level the blame for the setback at the feet of the French football authorities after they selected the Gunner for World Cup duty last month.

“I think it was a mistake to play him with the national team,” Wenger told press on Wednesday.

“I said many times that if France wanted Diaby in Spain they should not take him for Finland and Belarus.

“They could have taken him but not played him because the guy has been out for a year, played four or five games. You have a breather, give him two weeks to recover completely.”

The comments provoked an angry response from Les Bleus coach Didier Deschamps, who seemingly eager to stress his authority on the matter, bit back:

Questioned on the matter again this morning, presumably by journalists intent on stoking the flames, Arsene Wenger did his best to play down the matter by stating he had a ‘very good’ relationship with his peer.

“I have no problem [with Deschamps]. What people do not understand is that the act of expressing an opinion does not mean you have a problem with anyone.

“I just gave an opinion that was not even mine but that of my medical team that Diaby would have problems to coping with two things at once (and club selection). He has been absent for a year.”

What is obvious is that both Wenger and Deschamps want a fit Abou Diaby in their respective starting line-ups. It’s hardly surprising that they are both frustrated; he is, on his day, a world-beater. Whether or not either one of them get their wish is really up to the poor boy’s body…

Is DD a bit jealous Wenger bought Pires, Vieria, Petit, etc. but never chose to bring DD into our glourious side?

DD, how bout you remember who the Professor is, and who the student is?

You’re trying to play checkers against a Chess Master, mate. Enjoy your underachieving squad and let the Professor handle the big boys.

Let’s not forget that Wenger, being French, has an interest in diaby peforming for France, as well as for club. With these pressures, to respond like this, Wenger shows pure class yet again

Okay, let’s not get paranoid or condescending needlessly.

Seems like France is on the right track to not passing group stage again.

Lol. Thumbs up for your name tag as much as the comments below it! :p

Wait a minute guys. There was an article a few weeks back where we were appluading Deschamps for deciding not to overplay Diaby.

No no no, we were being sarcastic then.

Just like every time we cheered van Persie scoring. We all knew he was a cunt, really.

I think that was the german coach

I always thought deschamps was a stellar guy, only problem is one former france manager by the name Domenech. Now this guy, this guy right here is a dick!. Last I heard is that he told deschamps to ignore wengers advice and proceed to call up diaby. That’s a dick right there!.

Still went ahead and did it himself though, didn’t he. I don’t like Deschamps. I always had a problem with his face and his stupid hair and the fact he was Chelsea scum.

You sound about as much authoritative as a 9 year old girl begging a bully not to rip her favourite toy’s head off. Shut up and sit down you fat fuck.

Reports had it that diaby’s injury, just that wenger wanted to keep him at arsenal till the world cup qualifers pass, I think that’s fair (excersising caution) Another asshole with complete tool-like glasses and a shitty face decides he knows better than wenger and advices deschamps to do as he pleases. Onto deschamps now, being a cowardly prick that he is tries to stamp his authority by declaring wenger can’t control him on whom he picks and whom he does not. Moral of the story: these two guys are cunts and still wenger knows

If deschamps wants to play Arsenal players you can fucking play squilacci.
You can have a great cb partnership of kos and squid they got great understanding(arshavin laughs).

I forget sometimes, are the French FA the ones paying Diaby’s wages? Sometimes I can’t really tell.

I find it pleasantly surprising that, even in our commercially cynical age, the talents of players are still put at the disposal of their country.

France are the Liverpool of National Team sides. Their players and coaches just end up embarissing and tarnishing something that once had a great legacy. Diaby is an exception, he probably feigns injury so he doesn’t have to be around when Evra and Nasri inevitiably go “off the reservation”

“I want to remind him [Deschamps] that Arsenal are the only one club PAYING DIABY’s FUCKING WAGES. There is only one person who should SHUT THE BLIMEY FUCK UP and it’s Deschamps.”

DD Is as stupid as he tinks he is wise. He shud learn to respect someones opinion. I tink AW wants d best 4 both Diabys club and country.

Hey I just met you and this is crazy, you write like DIS, so dissapear maybe?

Just as Degaul was dillusional about france during WWII, so too is Deschamps about his abilities as a manager. I hope DIaby doesn’t suffer too badly from his childish behavior.

What an irrelevant little fucking coach who
knows fuck all as compared to wenger.
The title should even read.
“Wenger: Deswho?”

I don’t know how dischamps can be that stupid. I mean if he rates Diaby highly, shouldn’t he be focusing on The long term benifits instead of the short dustrctive ones by insisiting on playing Diaby?

Yeah and in some post two months ago I was in awe if rvp but now he’s just an irrelevant little prickish cunt!. People change. Deschamps=cunt till further notice.

I’ll come out and say it, even though some French frogs will thumb me down. Diaby should retire from international football. He’s had too many injuries in his career and he needs to focus and recover properly if he wants to salvage it. It is absolutely pointless to go away playing friendlies and qualifiers when you run a very high risk of coming back crocked and not fully recovering before heading back into club season where you hurt something else because your body mechanics are all wrong. I get it that these players want to play for their country but… Read more »

We need to start doing what United do, and have players get ‘injured in training’ and then miraculously appear in the starting line up of our next match.

Thomas B
Reply to  nujt

Oh to wake up in the morning knowing you have an arsenal game to watch in the evening. This is always a great feeling. <3 gunners!

Someone remind deschamps that Wenger can have that job with one phone call and the Professor can probably do that job better than any other recent manager of the French National Team even if Wenger fields only the U21 players?

DD should be quiet. If Wenger wanted his job he would be watching from the sidelines.