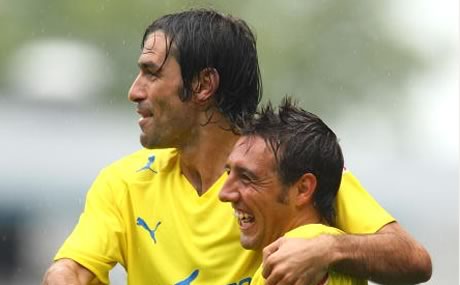 Before his move to Arsenal, Santi Cazorla sought advice, as any sensible person would do.

David Silva, his fellow pint sized Spaniard, told him the Premier League was great and that he should go for it, but when his former Villarreal teammate, Robert Pires, waxed lyrical about the Gunners his mind was made up.

An an interview with @johncrossmirror, Santi said, “When the interest began with Arsenal, Robert told me not to think twice, that I’d enjoy it, that it was the perfect club for me, that Arsenal has aspirations to win the title and go far.

“Everything so far has been true and I’m very happy here. I feel very at home, I am getting used to daily life in England, which is so different from Spain.”

Frankly, if Robert Pires told me to put my hand in the fire I’d do it, and it’s great to see a former Gunner accentuating the positives of the club instead of banging on about stuff that happened months ago that we can’t do anything about.

Cazorla says that having Mikel Arteta around has been allowed him to settle in with ease.

“It helps having Mikel Arteta here, he’s supported me a lot, and I’d like to thank the Arsenal players for giving me such a warm welcome.”

And he’s hinted that there’s a real sense of cameraderie in the Arsenal dressing room, an atmosphere he’s found when playing for his national team.

“I believe that to win you have to have a dressing room where everyone is pointing in the same direction, where there are no big egos, no individuals.

“Everyone in the Spanish team is equal. It doesn’t matter which club you play for and that’s why the team are so successful.”

Although it’s sometimes difficult to understand player sales, very often there are factors off the pitch that influence a manager’s decision and perhaps it helps a team grow to let one or two move on.

In the meantime we’ll hope that Cazorla makes the Walrus’s head explode at Upton Park today.

Thomas B
Reply to  Robert Pires

Robert, I love you.

I love Robert Pires. I the true meaning of the word; I love him.

Holdin Mygroin
Reply to  Thomas B

Okay man, we got it…you are gay

Thomas B
Reply to  Holdin Mygroin

Look man, everybody loves Robert Pires. If you don’t — you must be asexual. Which is fair enough.

Cazorla to score a screamer today!!

You said it!
Scored and remembered reading this!

I love you man. I seriously love the shit outta ya.

woosh, I hope you bet on that

AFC ME
Reply to  jeff

Robert pires and cesc fabregas replaced by again two awesome spaniards, cazorla and arteta.
Oh to have a spanish core at the arse!

Hahahahah “spanish core at the arse” love that!

*whispers* pires wasn’t spanish, he was french, but yes, he was damn good.

Actually I think Pires was half spanish.

*shouts*Robert Pires is half Portuguese and half Spanish by nationality. He was just born in France and hence a French citizen. Pires is the Portuguese equivalent of the Spanish Perez. Sorry for the miny

Damn you pires for not being french!. And fuck me for forgetting he’s french. Just that he seems so close with cazorla hence the confusion.

Do what? He didn’t listen to his little boy inside before signing?

Oh no, course he didn’t. He’s not a treacherous, Judas like wanker.

Dude, time to move on.

Shouldn’t your name be ‘A Risky Denilson Pass’?

Why don’t you cry about it some more?`

Thumbs up for Robert Pires, for being a True Gunner!

Later on in the day I will meet Henry, Adams and Bergkamp and do wonderful Arsenaly things with them.

Is Cazorla not one of the most genuinely nice players of recent? Always plays with a smile on his face which I love and seems to be taking the lead role further up the pitch, directing attackers as to where they should be and whether they should be closing down. No doubt his experience will help us greatly this season.

Here’s to hoping he’ll bag a couple of screamers today, one of them deflecting in off Kevin Nolan’s face.

Off-topic: After a century of supporting the club I’m finally going to see a match. It’s on 17th. Of November. Early Christmas in la-la-land

ring, ring. ring, ring. “Bobbie its the arsenal fans. they want to know if you will go on few more scouting missions???
Only in a gooners life could a english man respect several different french men at the same time….

These kind of remarks make me think highly of le Prof. Four generations that the EPL can be proud of. 1st, Wright & co (even though inherited but he took it to a higher level, the Double). 2d, Thierry & co ( best generation yet). 3d, VPersie, & co (If not for the betrayals, who effing knows). 4th, I know that Giroud & co will astonish many. ps. The fact that I write the strikers only is that the numbers of players he turned into world class is just making me proud to be a gooner and this is a… Read more »

cazorla lost me when he talked of spuds being a big club!!

Message to Arseblog: can you please do something about arseholes like this one who for some reason keep impersonationg me. I thought that this was against your comment policy.

There is only one Fatgooner. You’ll know that it’s me because my post are all well written and punctuated.

Lol fatgooner. You obviously punctuate your not so +ve comments bettter, this guy here is just arse.

“Frankly, if Robert Pires told me to put my hand in the fire I’d do it”

If he told me to do the same, and then instructed I thrust said hand immediately into my breeches, while still aflame, I’d offer no protest.

Cazorla makes me dream. It’s a pleasure to have him. I adore his passion. Without trying to evoke a debate or comparison, he’s a tripartite combo of Iniesta, Cesc & Xavi. Yes, that’s how good the bloke is.

Carzola is the best signing of the season