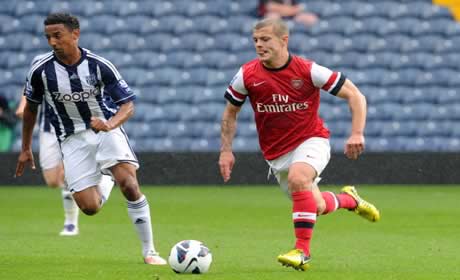 Jack Wilshere has returned to football, playing for just over an hour during Arsenal U21s game with West Brom this afternoon.

The midfielder hasn’t kicked a ball in anger since limping out of the Emirates Cup last July, and his last competitive game for the club was in May 2011 when Arsenal drew 2-2 with Fulham on the final day of the season.

Since then he’s had surgery on both the original ankle problem and a subsequent knee injury, all of which has kept him out of the game for far too long.

From what we can gather via the updates provided by @ArsenalLive, Wilshere played well but showed obvious signs of rustiness. He did create a good chance for Nico Yennaris in the first half, but today was not about what he can produce on the pitch. It was about getting him back in an Arsenal shirt and playing football again.

Arsene Wenger will wait and see if he suffers any reaction but it will take a few more reserve appearances before he can be considered for first team action again.

However, all going well it’s not inconcievable that he could return towards the end of the month with homes games against Schalke and QPR a possibility but the away trip to Reading in the Capital One Cup most likely.

Welcome back, Jack. He kinda looks old in that photo.

You changed the photo…..great. This one’s not so bad.

Jake I
Reply to  iop

Are you kidding?? He looks HUGE. All he’s been able to do for the better part of a year is weights and it shows. His arms and legs look massive.

GarmentDistrict
Reply to  Jake I

He definately looks more beefed up. Can’t wait for that sublime skill to be back in our team, now with added power and muscle. I’m sure he’ll be desperate to make up for missed time, I’d be worried if I was in the opposing teams

the most ridiculous post I have EVER read on this, I’d truly expect that in no place other than LeGrove (the comments part).
Bit of taste required here please

Shouldn’t that be ‘since limping out the Emirates Cup a year last July’ …?

Yes it should. You’re a genius!

You just stole my line mate!

Soooo happy to see Jack back.

Class is permanent, can’t wait to see him play again.

wow.. So hyped up now.. Pretty chuffed reading that article.. The prodigal son is here.. can’t wait to see him put podolski through 4 to 5 times every game.. if he hits his peak.. Arsenal, if not already, will be title contenders.. Damn pity we lost.. Could’ve been invincibles v2.0

You are right that he has been hyped up, probably too much at this stage. I just hope that people have patience, because it could take months for him to get back to the kind of form he showed before the injury and even then we have to pray that he doesn’t have any recurrence of those injury’s.

It’s L.A.N.S. and they don’t come any better than this one, he says completely contradicting everything he said above.

Still got the hump over Saturday, then come into work this morning and some cunt’s nicked me iPhone charger.

So this news is very very welcome.

LANS is applicable here, and what a signing!

Also, has anyone who exchanged their #19 Wilshere jersey for a #10 jersey, I’m curious if you’ve gotten it yet?

I know this isn’t an Arseblog issue, but as an oversea fan I’ve yet to get mine back and it’s been a month!

would be amazing if he could start at Old Trafford in early November. Here is to Jack and glorious 15 years of Arsenal football from him

I’m hoping we take a more mature team to Old Trafford. I don’t want our young boys around van Persie.

Well deserving of the no.10 jersey, I have got nothing but admiration for jack. On his shirt it should be.
JACK
10

Welcome back Jack, good to see u in the red and white of the Arsenal.