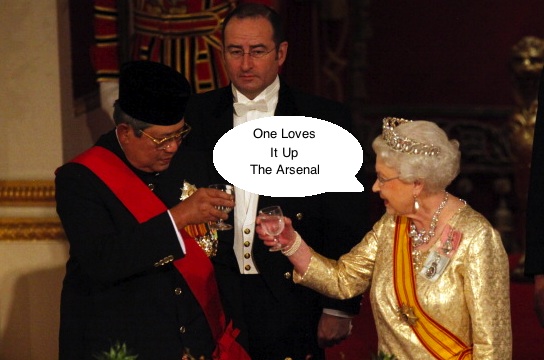 Arsenal’s plans for next summer are already taking shape after the club announced that Arsene Wenger’s squad will travel to Indonesia as part of a third consecutive pre-season tour of the Far East.

As is the norm (…err I think) in these circumstances Ivan Gazidis and Tom Fox handed over an Arsenal shirt to the country’s president, Susilo Bambang Yudhoyono, at 10 Downing Street while Prime Minister David Cameron watched on with that face politicians do when they’re pretending to like football. It all looks a bit over the top, but seeing as the dignitary was in the area after a state banquet with the Queen, herself a Gooner, why not?

The Gunners are also still thought to be committed to playing a match in Nigeria at the end of the season after arrangements for a fixture in Abuja were cancelled late in the day this summer amidst security concerns. More details are expected later in the season.

Speaking about the trip to Indonesia, which will include a match in Jakarta, Gazidis said: “Everyone at Arsenal is extremely excited to once again be visiting Asia and travelling to Indonesia for what will be the Club’s first visit to the country in 30 years.

“We know that Arsenal enjoy fantastic support in Indonesia and we are all looking forward to bringing the Club closer to these loyal fans and learning more about the country’s rich heritage and culture.”

Great news for Arsenal’s swelling fanbase in Indonesia – fingers crossed we’ll have a trophy to parade while we’re there.

Really wish they would come to the US for once. So I don’t have to go see Manure or some other shit team.

Apparently no money there according to those at the club. Despite AIG, AON, DHL and Chevrolet queuing up to give Man Utd cash.

Really wish they would go to India as well for once.

Ohhh Batshit !! I thought they said they would be coming to the US in 2013 ….. Sad just Sad …. with Kroenke being the major shareholder you would think he would try and increase Arsenal popularity in US …. although I believe they are popular enoughto merit one trip …

Now are the club sure about this trip? I hope we’ve got a back up plan just in case…. I’m not taking anything away from Indonesia, fans around the world deserve to watch Arsenal, just that we’ve had our fingers burnt once.

Oh God I’m out of the country just when they decide to come here even though last year people like Cesc and van Bronckhorst came over.

Forgive my ignorance, but is Lizzy really a gooner?

Course she is…doesn’t invite any old club around for afternoon tea.

Ha that’s great. I’m loving the fact she brought the corgi’s along – they must be gooners too

Can Arsenal earn anything else (Commercial deals) other than the cash?

I agree, why no tour of the US? The sport is growing in popularity and its fans have a much, much higher disposable income than in Indonesia. You also have the added benefit of Nike’s strong marketing presence in the US.

Doesn’t make sense while ManU is opening a US office and has General Motors as a sponsor. Forget the Far East, head west and come to America.

Hooray! This time I don’t have to go abroad to see Arsenal play. Needs to hunt the ticket immediately.
I think fans in Indonesia deserve that. If you see the time when Arsenal visit Malaysia, Arsenal Indonesia fans was there, and be the most vocal and noisy supporters. Maybe not much cash in here, but as the 5th most populated country in the world Indonesia has potential market. Hopefully this time Arsenal bring the trophies. And why not play it in Bandung instead of Jakarta? Jakarta is very hot.

And of course great news for Gazedis’s next pay rise. Which along with Stan’s balance sheet is what it’s all about – is it not ?

The home of chicken satay and the Komodo dragon, worth a visit for those two things alone.

Yeah as an indonesian gooner, I’am looking forward for this

For some reason I burst out laughing reading this, your pic didn’t help.

As an Indonesian Gooner for almost two decades, I’m simply delighted to hear this. Hope to give amazing support and hospitality next year.

i think with 250 mill people and football is the most popular sport in indonesia, this travel is good bussines for both.. nice plan..

Hope we get our transfers done early and get the team to gel before season starts..there are no internationals this year..don’t want a repeat of this season.

Im happy for Indonesia, but what the fuck? How many times do I have to see Manu, Chelsea, Mancity, Barca, Real Madrid, Celtic, Liverpool, AC Milan, fucking insigificant Roma, spuds, and other “who gives a shit” clubs before Arsenal just come to the US. Three years ago I was starting to get pissed at this blatant “fuck you America”, two years ago it grew a little, last year I was fucking angry and this year I don’t know how to act. They went to Malaysia last year, and now they are practically going to the exact same geological spot. If… Read more »

What’s Martin O’Neill doing in the middle of that pic?

They should stop by Australia as well. We’re so close to Indonesia!

Oh man. This is exciting. Can not wait longer. We will make Gelora Bung Karno the most noisy place for the Gunners :).

Finally!! Can’t wait till they are here.

Worth remembering that by the mid-century countries like Indonesia and Vietnam are forecasted to have a GDP per capita at the very least approaching that of European countries, and collectively they have shitloads more people than Britain and a much stronger interest in football than the Yanks.