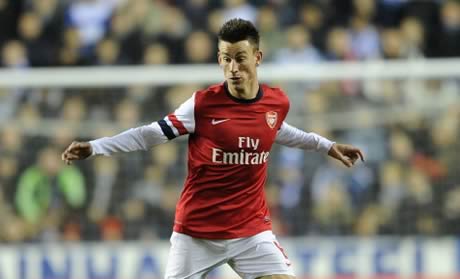 Laurent Koscielny is set to miss most of December after picking up a groin strain early in last night’s 1-1 draw against Everton. The freezing cold conditions must have played a part as he tweaked something in the first minute to be replaced shortly afterwards by Kieran Gibbs.

Although he’ll be hoping for better news it’s probably best to accept it for what it is and if he gets back sooner then all the better. The Arsenal manager was pleased with the effort of his team at Goodison Park, and suggested the result was right for both sides

“Overall, if I look back at the game, it was one of big physical intensity,” he said. “We had a good start and after that I felt Everton came back. Their direct game was always a threat with Fellaini. We have regrets on the goal we conceded but overall, I believe that 1-1 is a fair result.

“It’s a good point here and it was a game of remarkable intensity. We needed to show great spirit today to get a point because they were up for it. I can only say I’m pleased with the effort we have put in the game.

“Last week, we played Champions League Wednesday night,  Saturday at Villa, today at Everton. We have to give a lot and we have some players who play on the edge and hopefully will recover for Saturday.”

With high flying Swansea up next on Saturday we need to get the poultices out and bathe those canker sores in baking soda and red lemonade.

And that nothing happens to Vermaelen/Mertesacker before he does.

I’m sure Djorou hasn’t got koss in his prayers!

That’s awesome!! so the new facility is LANS

Don’t even think about it.

We are tad closer to sebastian shittaci. So this can never be good news. Also theo picked up a knock, so that’s a shame aswell.

The remaining 9 players came off the game with mental strength that’s just needed for yet another draw this weekend…….um, yeah we should be good!.

Btw bale got hit in the face for the own goal yesterday. I doubt it did anything drastic to his already deformed face!

A N Other
Reply to  Reese

Probably made him look better…naa

Nooooooooooo! Kos has been solid after a weak start, he was finding last years form again..shame. He always adds a bit extra when he makes his run into the opposition half, hope he’s back asap.

and with more luck, Kos might have scored some goals
and when we finanlly got some choices in a certain position, here comes the injury..I hate that! 🙁

Hope it’s not the same 3 weeks that Diaby’s been out for his quad pull. Get better Kos!