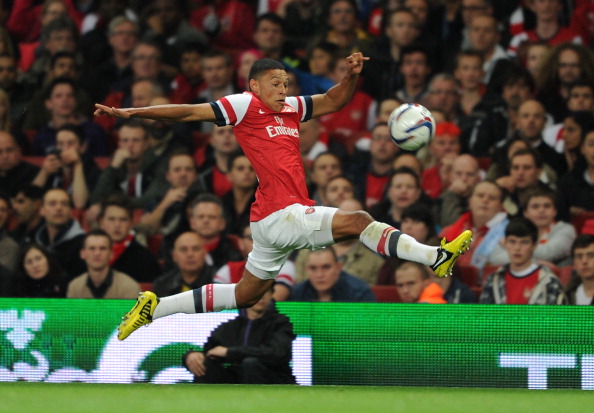 Alex Oxlade-Chamberlain has only scored once this season in all competitions – a rasping effort in the Capital One Cup against Coventry City – so it’s perhaps unsurprising to hear that he’s annoyed with himself for not being more predatory in and around the box.

A revelation in the second half of his first full season, the Southampton Academy graduate has struggled to make the same impact this term with injuries taking their toll on his consistency and teammates skipping ahead of him in the starting line-up.

Despite his somewhat tepid impact since August, there have been promising signs in the last couple of weeks with performances against West Brom and Reading hinting at a return to form.

“I want to be getting more goals and more assists, so I’m always beating myself up when like tonight, I don’t,” he told Arsenal.com after the match at the Madejski.

“As long as the boys are winning, that’s the main thing. I’ll keep plugging away and keep trying to do the right things on and off the ball. I know it’s important [to work hard] for my full back.

“Whenever I get the chance to play, I can guarantee I’m always going to give 100 per cent and I’ll be looking to get on the scoresheet a bit more as well.

“I’m never happy with myself. I know I’ve got quite a good shot so when an opportunity comes about and I don’t make the keeper work, I’m not a happy boy. I think that’s the best way to get the best out of me. I’m always hard on myself and push myself to do more.

“I’m sure the fans are doing that to me as well, as I’m finding out. I’m just going to keep plugging away and keep working hard in games and in training.”

Chamberlain’s 16 games this season, nine as a starter and seven off the bench, represent a lower tally than any of our other first team wing options (Arshavin aside).

With a busy schedule ahead, Gervinho heading to the African Cup of Nations in January and Theo Walcott possibly off to pastures new, the Ox could well be a vital weapon in Arsene Wenger’s armoury in the coming months.

It’s a lot of responsibility to heap on young shoulders, but  it’s obvious if he channels his determination correctly he could be a real star. Let’s hope he pens his new deal soon.

remember the invincibles, because we aren't good anymore
Reply to  big balls

goonerbynature
Reply to  remember the invincibles, because we aren't good anymore

Or may be he’s mature enough to realize that player selection depends on circumstances and Ramsey offers a little more defensively?

even gervinho scores and assists more. and plays more balls into the box. but the ox is still young and has time on his side

He’ll need time, as we all said last year. It’s good to see that the spotlight on him has lessened, as have expectations. It took Theo some 7 years to get to this point, where he’s starting to look the part. Ox will also need some time, but I’m quite confident he’ll be a much player than Theo ever will be. A different player, mind. Ox doesn’t have as much pace, but he’s got trickery, he’s got toughness, and he’s smart. He’ll get there.

But does he write children’s books?

hang on, the ox writes childrens books also?
how did this happen? – wenger out

How very refreshing to read an intelligent comment on the internet.
OX has it all pace as well , lets just give him time to develop and also keep an extra eye on those who advise him and Im not talking about family members.

It’s funny how Theo is now the ‘Will he sign’ player , a couple of years ago(last year even) he was considered to ‘lack a footballing brain’ ,now if we lose him we’d be in CRISIS.

Assuming those that said he had no footballing Brain are the same ones that now say we’re in crisis of course.

Theo’s form has really improved this year. Even the man himself said something about consistency in patches a couple years ago if I recall.

5 goals and 4 assists from league matches( 6 games started and 7 matches as sub). So yeah, we should keep him

to be fair if we still had cesc, nasri, song, RVP, a fully fit Arshavin then the cries would be less. now we just have ox, rambo, gervinho, where’s arshavin? so theo looks so important

so the fans aren’t fickle…. but the pundits will always be

its not how fickle the fans are, its just how far down the quality slide we have fallen

You are so right gooner, don’t think many people think theo is great by any means but to this team at this time he’s vital if we want that fabled fourth placed trophy.

The term ‘crisis’ is starting to lose its meaning like the term ‘legend’.. We were in a ‘crisis’ over the past few weeks, after 2 wins were sitting 5th. Shows how tight the table is, we get some consistency and top 3 should be fairly easy.

remember the invincibles, because we aren't good anymore
Reply to  Blobb

hungry OX.
I would call him

Can anybody verify this? What’s withe unknowns?

looks like he’s getting a trial, but just not calling it a trial.
coming to england with a possibility of signing a deal??

of course, he may just be trying to build his profile with blatant lies. who knows?

My mate who is heavily into African football raves about him. Dominated Drobga in the ACN Cup Final last year. How many defenders can you say that about!

With Djourou likely to be sold (and Squid hopefully) seems like a good buy. He will be happy to come in as 4th choice and look to push on. Can also play as a box-to-box midfielder and has even played as a striker!

remember the invincibles, because we aren't good anymore
Reply to  Matt

According to his Wiki profile he can play in the DM role – replacement for Diaby??

He can also play as a Defensive mid.
http://www.youtube.com/watch?feature=player_embedded&v=vpG1qcBW-MQ

If Vertonghen is telling the truth about Wenger wanting him to play at DM, it looks like he was looking at a straight up Song replacement who was similarly versatile so this guy would make sense.

Plus nobody has heard of him so it sounds like a definite deal.

@ GUN That reel starts with the guy getting a yellow card! Haha! Typical Wenger signing. As for the player’s qualities and position… it appears he plays DM for his poor club side. He is quite right-foot dominant though, and his best position is central defense where he plays for his country. Stylistically, maybe (hopefully) he is closer to a young Rio Ferdinand than Toure. Like Rio, he’s 6’2″ fleet of foot and anticipates well. Rio probably has better technique on the ball than Sonzu, but Sonzu appears to have decent technique, like Toure, but also good distribution like Rio.… Read more »

Old news…this piece of gossip was up 36 hours ago. Supposed confirmations and denials from competing websites. Nothing, of course, from Arsenal. Reading were said to be interested–seems like a more likely first landing spot, but anything can happen. He could be our new Eboue.

Now the focus becomes on Huntelaar apparently. At least three papers/sites with ‘exclusive’ news of negotiations. Seems slightly more concrete than rumour. I for one like the idea.

If we are in for Huntelaar, I can’t think of a clearer sign* that Walcott is leaving, possibly in January.

He has not played that well this season but still he should always start ahead of Ramsey on the right wing. Ramsey is not a wide player and playing him there won’t do him or Arsenal any good

anyone noticed how he always says ‘the boys’?

He’ll be demanding to play up front next.

Or in central midfield, his preferred position and where Wenger is quoted as seeing him ultimately end up.

Been very impressed with him recently. Love his positivity going forward. He’s always turning and looking to attack. While Aaron, dwells on the ball, goes backwards and/or does shockingly bad mistakes.

Yet another pointless and unneeded dig at ramsey

Well here is player who we know tries a lot and can play in mid or wing position and still dazzle unlike walcott or gervinho.he tries to get on end of crosses , very much succesful in dribbling past the opposition , close control, long consistent shots, can burst through the middle easily, right attitude.well in short he is got everything but stats against him.
Similar like rosicky when everyone called for him to be replaced we got our mozart back.

The comparison between The Ox and Theo is inevitable, for so many reasons. However, what first and foremost sets them apart is the attitude on display, in my opinion. Theo certainly presents himself in a positive, acceptable manner(apart from the unfortunate habit of using the phrase “you know” and the like in interviews – it`s hilarously annoying if you start noticing it), but I for one is always left with the eerie sense of political correctness , of sentiments expressed in a somewhat understated cynical and calculating way. Ox speaks with his gut, and adresses issues with a refreshing clarity… Read more »

I have noticed that about Theo’s interviews too. It’s like he says what needs to be said as opposed to responding honestly and then flashes his little smile and the next question is asked lol cheeky bugger

Just wondering who the fans would rather see in a red and white shirt ? Huntlaar or Lorantie ?
Is prefer huntlaar as I feel lorantie is a simalar player to giroud , big good in the air , Huntlaar would give us another option.

We can do without Huntelaar or Llorente. Neither are EPL acclimatized and would probably be just a slight upgrade to Giroud, if any. If we are not going for Falcao or Cavani, then Demba Ba at 8 Mill would be our best option. He can play with Giroud or lead the line himself. Stronger than Walcott, he is pacey, tricky and a good finisher.

I would start Ox every single game on the RW.

Zambian footballers aren’t
bad, seem to remember the having a great team before a plane crash and them doing pretty well this year at the ACN. Wouldn’t be the worst punt.
Not sure Huntalaar is the solution, failed to live up to hos reputation a lot and has three poor seasons for every good one

Ox was awesome against Reading. at par with Podolski, just unlucky.