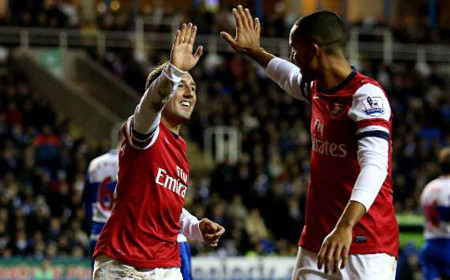 All numbers today via Opta or my personal database

Mondays are generally great for arsenal. We haven’t lost in a long time on Monday fixtures!

There’s also a new found habit by Arteta to try and win every aerial ball, like a real DM would!. I like it and him.

Nice diving header from Cazorla there. Now that’s the kind of diving I REALLY want to see!

Why was he insisting to Wilshere that he scored with his head ,Did they make a bet ? ‘You are so short if you score a header ,I’ll do an Eboue dance’

I think he was just excited, apparently it was his first ever headed goal in a first division.

remember the invincibles, because we aren't good anymore

Basically. Reading were quite poor
However, I don’t mind. 🙂

Zseusz
Reply to  remember the invincibles, because we aren't good anymore

Better them than us.

Jack
Reply to  remember the invincibles, because we aren't good anymore

Let’s not discount this win as “just Reading”. A week ago we lost to fucking Bradford City.

I was going to moan about 2 goals we let in yesterday..but read your comment and its true….it is an improvement…cheered me up a bit… 🙂

That’s the thing, Reading are so attacking that you are probably going to concede eventually but also score a lot against them. They’ve scored something like 13 goals against the big 4 (not including Tottenham in that) and have come away with nothing.

Runcorn Gooner
Reply to  remember the invincibles, because we aren't good anymore

I think they were also naive and we came out of the blocks fast.Why don’t we do
this more often rather than the over cautious approach we seem to have for so
many games this season

My heart skipped a bit every time Wilshere went down after a challenge. That lad better stay fit, will be key to our season revival.

the only number i really bother to care about is the score card…when arsenal is winning. Other numbers like stats and data are all meaningless if the team is winning or if its not winning. In the result oriented world of football, it not how we got it as long as we got it. We need more number(scorecards) like last night till we actually win FA cup and qualify automatically for CL. And the most important number in january is the number of top top top quality players we bought and removed passengers from our team. Thats all I really… Read more »

The only stats that matter are the number of thumbs down this comment receives.

Definitely heard him calling for kicks 3 times. Might have been a good footballer, but has nothing to offer as an announcer.

Exactly. 7am kickoff–you’re slipping. I recall three distinct times McManaman suggested that Reading go and kick someone to get themselves into the game.

I saw so many ‘key passes’ and ‘dangerous runs’ and penetrations. That’s not the Arsenal of the past 5-6 matches ,I hope we can keep doing that

BTW Does anyone have stats on cummings?

No stats on cummings–Le Coq wasn’t out there for all but a handful of minutes.

After last nights performance, Wenger would be crazy to change the line up for Wigan. Podolski’s wing play was great to see, beating his man and getting good crosses in. Gervinho take note and revise……and revise again till you get it! Liked theo up front. The way he draws defenders in, then spins…once he clicks with midfielders, no doubt he’ll score bucket loads. Hopefully for us. Now all we need is consistancy and so i hope we can carry this performance into the next game. COYG

Its amazing the turnaround – last Tuesday many had lost their sense of proportion and were seriously wanting to consider a future without Wenger.

Six days later and here we are in fifth, one missed Arteta penalty kick from being in third, having qualified for the latter stages of the CL.

Congratulations to Walcott, who looked dangerous throughout. For away games it is a fantastic option to have him through the middle. He isn’t just quick his first touch has improved this season and he is pretty lethal these days. Can he play as a central striker at home, when we come up against more compact defences? i’m not sure, i hope so. I expect to see him start the Wigan game, but lets see if he can score goals in that role at home. If he can then, Arsenal will give him that contract. Personally i feel Wenger and Theo… Read more »

I’ll leave my anti Wenger rants of the last few weeks aside.
In those rants I have been dreading the thought of Walcott escaping for want of giving him what he wants, on the field.
I think he can score a goal a game (I hope I’m right). Versatile player Walcott.
I hope he stays.

What’s saddest about our recent lack-of-form is that, yesterday’s marauding of Reading proves what every Arsenal fan suspects deep underneath – that we can beat anybody if we simply play our game. Despite this we only have 27pts out of a possible 51pts wheras United van Per$ie have 42pts. The problem arises when we play Sunday-Wednesday-Saturday with virtually the same team. This leads to fatigue, and fatigue leads inevitably to poor performances. Wenger should do what Ferguson does and rotate the team properly so everyone stays fresh. We’ve got plenty of quality on the bench. A fresh Francis Coquelin is… Read more »

Yesterday was good to be an arsenal fan. Yes, we gave away 2 silly goals but overall we dominated and looked steady in all positions. Think that Wenger was calling Theo’s bluff with playing him as a striker. Really would love him to sign long term but I think he’s already made his mind up (£). Would also live him to prove me wrong as well though.

In the shade of Cazorlas performance, Podolski looked really sharp

Arsenal and Cazorla respond to Neville with midfield assault | 7amkickoff

[…] the first. Gibbs, who had been electric all night and who got his first two Premier League assists (By the Numbers), gave Kebe a little head fake and crossed into the box. Podolski was there and stole the ball out […]

Great performance from Cazorla, our midfield is looking strong this season. Our defence is still giving away goals though and I think this is the area we need to improve in January. Read my suggestions at http://shootsyscores.blogspot.co.uk/2012/12/new-years-shopping-list.html