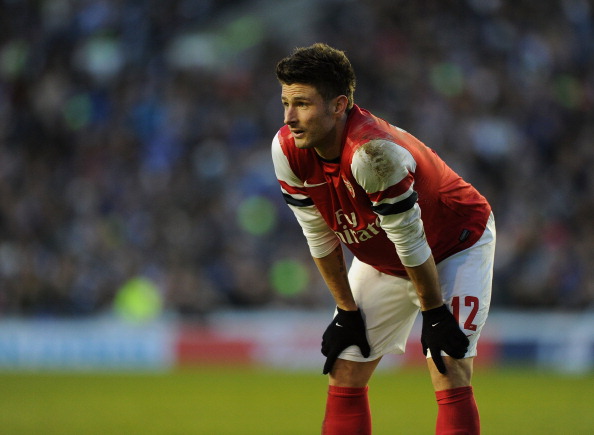 Olivier Giroud says he’s determined to be a hat-trick hero having bagged braces on four occasions since moving to North London. Although he didn’t mention it specifically, we also like to think he’d like to kiss away the pain. And would stand by us forever.

The French international bagged his latest double against Brighton on Saturday but was again denied the match ball having come similarly close to the feat against West Ham, Newcastle and Fulham.

“I was not so far from the hat-trick again,” said Giroud after the 3-2 victory which sets up a 5th round clash with Blackburn Rovers.

“I want to continue to work hard, to succeed and get my first hat-trick soon.”

Paying lip service to the work he has put in on the training ground while talking about his latest strikers, the hitman continued:

“[For the first goal] Lukas gave me [the ball] in the right position and I just tried to hit the target and not to shoot too strongly. I liked it. I’ve tried to work on it in training.

“I liked the second one because I made a good run and Abou gave me a wonderful assist. I did not have a lot of time to finish, and I finished very well.”

Obviously impressed with the way Giroud has improved on his understated start to the season, the boss, who prior to the game had compared his summer signing with legend Alan Smith, again highlighted the 26-year-old’s physical qualities.

“He [Giroud] started a bit sloppy and became stronger and stronger. He finished the second half [in a] very, very good [way]. When he gets into the fighting mode it is difficult to handle him. This guy is tall, strong and quicker than people think he is. He has good finishing as well.

“He could have played in England 20 years ago, 10 years ago and today. He is all you need to play as a centre forward; a physical presence.

“He gives us something different. I believe with him and Theo we have a good blend. Without him today it would have been difficult.

“I knew before the game [it would be a test of character]. But we responded well I must say, especially in the second half.”

It’s not often Arseblog News attempts to shoehorn an Enrique Inglesias reference into an article title but we’ve done it now. Indulge us.

Anyone else curious about what giroud and walcott could do together up top?

Glorious springs to my mind.

For that to be a success, Walcott will have to PASS DA TING!

Classic, yet another Walcott jibe…
Uuu, uuu let’s do ramsey next!

Ramsey should stick to the center of the midfield and stop drifting wide. 😛

Giroud hat-trick on Wednesday, no worries

prinzpoldi
Reply to  One Arsenal

Very exciting prospect.. Would love it if he out scores RVP next season..

vishal
Reply to  A N Other

How ab this season itself!!!

A N Other
Reply to  vishal

@vishal..this season would be good but he is quite a gap between him and RVP at the moment.. but then RVP has been in PL for ages…

A N Other
Reply to  A N Other

strange thumbs down… some1 doesn’t want Giroud to do better than RVP.. I don’t know this Spuds fans don’t stick to their own forums, blogs etc.

a Gooner in Manchester
Reply to  A N Other

thumbs down for mentioning the Dutch twice in one sentence, I guess.

He can take my breath away. Every day. Might as well start next game against Liverpool.

Blogs, I would like to point out that Enrique Iglesias played alongside Phil Collins at a SuperBowl halftime show. You may want to consider that title again.

May he forever burn in Stamford Bridge..

Loop A Hole
Reply to  arseblog

Arseblog, forgive me, but isn’t the name Enrique Iglesias? You seem to have put it Inglesias. Is that some kind of word play I will never understand?

He can be a hero. I hope just not for one dayz

I know it’s sad to think like that, but I’m going to risk the onslaught of thumbs-downs and say…..my favourite Arsenal player.

The fact that the got such a hard time when he started only enforces that. As some noisy bird sat behind me the other night kept squawking “I luv you Oliver (sic)!”

Giroud is scoring…great news!! Theo is scoring … great news!! But this is transfer window FFS! where are those fucking transfers we so badly need. We are just one kick or one twang of ligarments away from being hopelessly undermanned. And all the current players have huge list of injury history. One can sing whatever song they have/want to sing now…but I just fucking hope we dont have to sing KHUMBAYA! when our players get injured and we have no quality players to rely upon. “Its gonna take a miracle, to save us this time and the saviour has just… Read more »

The 6 month period of adaptation is over and we are now seeing what the Johnny Depp of football can do. Now we just need a sex tape starring Scarlett Johansson and our chisel faced french and all would be well in the life of me 😉

Welp, if we are going to go into the second half of the season with just one registered striker, I’m glad it’s Giroud. Seems to be coming into his own, and long may it continue.

Giroud, Theo, get me one more striker pls. Let the preparation for the season ahead begin now

Giroud has flopped at being a flop.

He is a player of tip top toppedy tippedy top top quality.

the progress is there but i have not eaten my words as yet.

His braces against Brighton and H A and West Ham just showed how good Giroud can be. He’s obviously way better than B52 or Chamakh in that lanky centre forward role – which is something of a relief. But four goals in two games still doesn’t yet make him a 20-plus-a-season man. For that we’re going to have to wait a little while longer. What’s extra nice is how well all our new recruits are now contributing. With Theo signed up and Jack back in relatively full flow maybe we can do something this season after all. A few choice… Read more »

Well he’s already got 13, with a bit of the season left yet he might well score 20+

I was thinking Premier League not all competitions, but it’s still nice to know.

What OG doesn’t get enough credit for though is assists. There he’s definitely improved since joining us. 13 goals and 9 assists is a fairly decent tally.

No problem Oliver. Pool at home on wendnesday is a perfect opportunity to get your hattrick

He should have a chant based on Hero

You can be our hero, Oli
You can score away our pain
We will stand by you forever
If you score a hattrick today

I love how he works hard for the team, not just for himself.
He can teach van Judas a lesson in that respect. A proper team player, will no doubt continue to improve and get more goals for the Gunners!

Giroud heart is red/white. The way he went mental after scoring was priceless…the yellow card can fuck off. Just that we Gooners must not forget, when he’s having a dry run, remember how he remained faithful and committed to the club…never giving up and always wanting to find results to please us….what a charming man

some fans are so naive it gives me fits.he has scored a brace n the chants of ‘who needs rvp are allover’.he might have been a moneygrabbing cunt but OG scoring a brace has not completely erased the pain.

yo
Reply to  LOAN RAMSEY INSTEAD

boo fucking hoo. give it a rest. 4 goals in 2 games and youre still dooming – what’s the point in being a fan if you don’t choose to enjoy moments like this?

yo
Reply to  LOAN RAMSEY INSTEAD

also how can you talk about fans’ naivete with a name like that?

He has been getting in great positions to score and that is half the battle for any striker.

Back then, i was the only one in the midts of many gunners supporting this gentleman; now every one is back saying all the good stuff about him… I pity some of our dear gunners!

yo
Reply to  Nura Y

Amen brother! And unbelievably there are some who are still defiantly negative. Some people need to go to the corner and have a quiet word with themselves.

Say what you wan’t but theo should have squared to HFB for a tap in on two occasions on saturday. One in particular when the defender slipped and theo opted to hit the near post. We won a corner instead of a hattrick. This is no theo slamming. Just saying things the way they were. Look at ramsey. He had a good game but looked a little weaker physically in a one on one and was a bit easy to play a one-two pass against. He kind of rushed his charge at the player with the ball, more like a… Read more »

Fairplay to the lad, he’s not originally a DM though. Maybe Wenger want him to play the Arteta style role. I prefer Coquelin in that position, he’s fast to the challenge and looked to be in a good form. Unfotunately he’s got some hamstring problem, and not the first time I guess.

Let’s hope he can score hat tricks against top 4 opposition!

People bang on how many strickers the manchesters have and their quality (heh, welbeck too gets a mention) but the skunk aside, how many have more league goals?
Not saying we don’t need a back up to him though

Yes but Welbeck, hernandez etc haven’t got as many games as giroud. I’m not in any way slating Giroud but he’s our number one striker yet the two (welbeck, hernandez) are not uniteds. I just want him to turn up in big games, i’m sure he’d like that too coz that’s whats important.

Coz when he has failed to score against the “big teams” we have gone on to drop points. Liverpool should be a start though.

Yes, Theo probably should have squared for Giroud and he’ll probably look at that in the match review.

But in all fairness, you want your forwards cockey enough to think they can always score. As long as he gets a decent shot on goal, I can’t fault him for taking a chance.

Now, those Andre Santos attempts looked like they belonged in the NFL vs the BPL. Those, I do have an issue with.