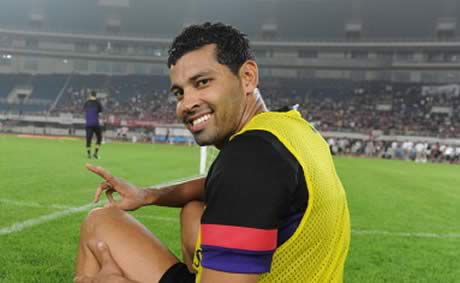 Arsenal have confirmed that Andre Santos has joined Gremio on loan.

The Brazilian joined the club in August 2011, and made a total of 36 appearances, scoring 3 goals. His first season was hampered by a serious ankle injury, and with the emergence of Kieran Gibbs this campaign has found his chances restricted.

Then, when Gibbs was injured, Arsene Wenger went out and bought Nacho Monreal from Malaga, a sure sign that he had lost faith in the former Fenerbache man.

He wasn’t a bad fella, despite his unadvisable shirt swapping that time, just not the right man for Arsenal.

Arseblog News wishes him well in Brazil, where the meat is plentiful and the sun shines like his smile.

I will miss you gays!

He asked for a move abroad because he missed driving.The only thing he does quickly.

Sorry to be pedantic, but Santos scored 3 goals for us, not 4!

he scored one for the reserves this season

On the topic of Gael Clichy, did anyone else see Southampton tear him to pieces at the weekend. Couldn’t help but have a little chuckle.

Nasri was anonymous as well. Good football from Sou’ton.

City bought the wrong frenchman off of us. Idiots.

They both seem to have lost a bit of pace. Looks like sitting on the bench alot and an obvious lack of desire seems to be sending there career’s down the pan. Oh well shit happens. As for Santos good luck to him.

You are correct. The official site has him down with 4 goals, which is where I got the stats but they have it wrong. Chees.

Now I want some cheese.

Not a bad footballer but he’s just not a Premier League full back. Wish him well in Brazil.

The most tubs player in the league this season?

10m spent on Fatso and Park.

Picky picky. This news marks progress as far as the squad is concerned.

And I wonder how much of his wages we are paying for them to play for other clubs. Gerimo and Vigo are sure are not paying them what we gave them

Less than we would have paid him to not play for us for the rest of this season.

All the best to our “gay” friend.

He defends when he wants

but does not want to much..

Soon we shall strike. The time is almost right.

Andre santos, hope he makes it into the plane. I mean all those stairs?.

Anyway good luck, ah who needs that Dennilson easily made it there. So can santos I reckon.

I’ll miss the chunker in a way. Hope he can find some form and come back, if not I hope he has a decent career in Brazil.

maybe/hopefully arsene is finally clearing the books to make big signings this summer so we can challenge for the title again. any details on a possible buyout option on this deal? 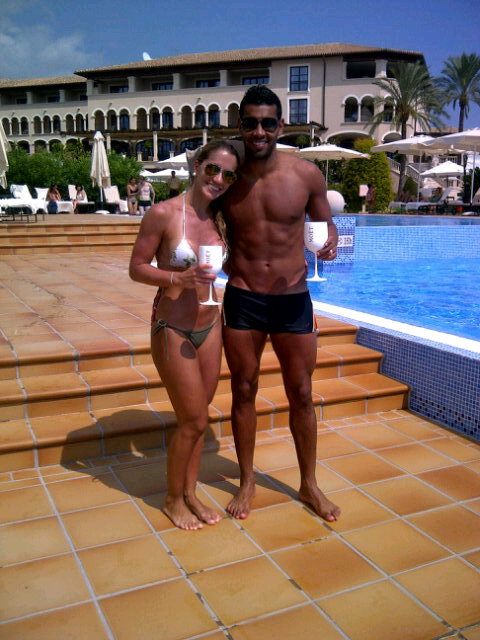 Nando’s should use this picture as a selling point, a bit like Subway use those fat to thin guys.
‘Eat a shit load of our piri-piri chicken and you too can look like this’

He’s holding it in…

Did anyone else spot the ghost standing behind his girlfriends shoulder?

No that’s my buddy irish

TO Gooner
Reply to  arseblog

Those trunks made me initially think it was a censure bar for what was originally a nude pic.

All these thumbs up are for the lady right?

I would do bad things to Santos’ wife. Like say take her to salon then spoil her hair in bed later that night. I’m so bad!

He turns like a truck blogs, he is fat.

Is it only be but is the new arsenal.com website layout rubbish

Yeh, it’s horrible. I was saying the other day it’s really hard to read the text on the articles too. I took part in the voting they did for the redesign, I don’t remember thinking any of what they have ended up doing was a good idea! Oh well.

Santos arrives at gremio lockeroom.
” Um halo thea GAYS”
Everyone in there Dissapears.

His goal against Chelsea was on of those throw your pint everywhere moments. Loved it!

I’ll miss him; he was a big character. Like when he came on as a sub and fouled Balotelli after Balotelli had been kicking Song all afternoon.

And he drove a Smart Car. Which is pretty cool!

I wonder how he would have faired had he been played in another position…. DM? He was certainly no LB!

“And he drove a Smart Car. Which is pretty cool!”

Until the driving ban anyway – not so cool!

Well, he had more than one car….. so obviously he wasn’t driving the smart car as an eco-statement either!

I love how Blog is more interactive with commenters today. Very good, sir.

Maybe he overheard someone saying that what he needed to sort his game out was a serious rocket up his arse?

Yeah, must admit I have a couple of good memories of burger boy santos. Also his arrival slighty lessened the pain of Eboue leaving us.

..But now we have no happy useless defenders.

The Squid doesn’t count then?

Hmmm the squid is pretty damn useless. Just not quite as smiley

It was all down hill for him the second he swapped shirts with judas, and well, he wasn’t really going to get back up a gentle slope was he?

TomJ
Reply to  kiss my arsenal

It was downhill long before that, if he played well or even solidly it would have been forgotten quickly because he was and is liked by the fans. It’s down to the fact that our left was targeted every time he played and he couldn’t cope,

Even if Brazil of today is not quite as good as Brazil of yesterday, you don’t go from being a starter on the Brazilian national team to crap in one year. The truth is that Santos is a good player that never really got a run of games to gain consistency. The biggest problem is not his ability, but really his style of play. We all should have known from the beginning that his attacking tendencies would put us at risk occassionally, and certainly Wenger knew this as well. In the end, we needed a more balanced player which Gibbs… Read more »

so many loan deals without actually having anyone taken off our books outright (from the ones we don’t really need) is just like James Bond and Moneypenny – close, but no cigar.

It’s obvious he isn’t a full back, but given the Bosses liking of playing players out of position on the flanks seems strange he was never given a run a little further up the field. His liking for a run and taking on players was always there for folks to see.

The Dude
Reply to  Red Fred

I think he is too slow for that kind of role.

I still remember till today his goal against chelsea, hope he gets his form back.

I had high hopes for Santos – the new Nigel Winterburn, the new Kenny Samson, or even the new Eddie ‘ambassador ‘ Hapgood?
Alas, we got the new Gus Caesar.

Sad to see him go even though he did have the best of games of late. Seems like a genuine character whom spreads joy in the dressing-room. The only down side is that we are unable to sell our fringe players. How many is out on loan now? Denilson, Bendtner, Park, Santos, Djourou, Frimpong(still rate him though) and several youngsters. Lets hope we can get som cash for all of them soon or later 🙂

This is not a popular view – or at least widely held – but I rather liked him.

If we could have got rid of certain others as quick – or quicker – then I would be a lot happier than I am.

Good Riddance. Should have joined United as Van Persies dishwasher.

Good riddance- after running more to swap than he did that whole game -hope we never see the fat fuck again.

Andre Santos: The left-back who made Jordan Henderson look like Lionel Messi. Now I couldn’t help but think of what ribery would do to him. Glad it’s no longer my concern good luck!

Goodbye & good riddance,the ‘gays’ bullshit ran out of legs months ago…and the picture of Santos looking ripped is a fucking insult to us paying Arsenal supporters-he’s become a lazy,fat,unfit excuse for a professional sportsman,an embarrassment to our club.

In another news, Chelski are now playing on Thursdays.

As much of a flop as he was, and as dumb as the RVP shirt swap is, I will NEVER forget the goal he scored against West Brom last season on the final day to keep us in the Champions League. Granted the West Brom backup keeper was absolute garbage on saves all day long, it was still a run and a desperation pot-shot at net that many of our former “Wing Backs” would never have taken for better or worse.

I still feel that this loan has more to do with finances and what’s right for the player than what’s right for the club. I don’t care if he doesn’t play in the league and cup (Nacho) or the CL (Verminator), at least he’s a backup plan. I don’t see how this loan strengthens the squad. Sell him in the summer, yes, but don’t loan him now.

Does this move might have something to do with his charge for dangerous driving?

Some things just dont make sense to me….. sure santos was not the best player on the park, but i could think of worse in the team? He would have been much more effective out wide where he doesnt have to do his stab like tackles.

I just find this whole thing abit odd. We seem to be in somewhat of a defensive crisis, yet we’ve sent Djourou and Santos out on loan…….. couldnt we have sent Squillaci out instead?

[…] Read the full article or Check out Arsenal on Amazon […]

Good luck to him. It just didn’t work for him here

When Brendan Rodgers said he thought Liverpool could finish second I didn’t realise he meant in every game. 😛