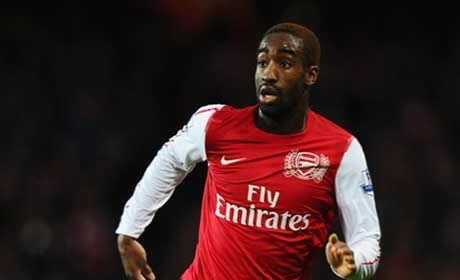 Johan Djourou is, apparently, open to the idea of staying at Hannover beyond the term of his loan spell.

The Swiss international will stay until the end of the season with the Bundesliga club, and there was no purchase option included in the deal with Arsenal.

However, according to Bild and a ‘consultant’ named, Marco Lichtsteiner, “Johan and his family feel very comfortable in Hanover 96. The project fits well with him. In the coming days there will be a meeting with Mr Schmadtke [Jörg Schmadtke – athletic director for Hannover 96].

“Everything depends on Arsenal. Johan wants clarity on his future and where he’ll play next season.”

And this mysterious ‘consultant’ claims Djourou would be willing to take a salary cut to make the move.

“It’s not just about money,” he said. Which is amusing as it’s just money which drives his profession.

Djourou has made 10 appearances since moving in January, compared to just for Arsenal all season, and it does look as if his future will be elsewhere.

Such a humble player, massively underated as well. It’s a shame he’s not with us for the run in.

I’ve got nothing but respect for those play for more than the money and those who show their love for the club. If this is true then fair play to him. Only draw back on our part is we lose a home grown spot but i think we’re well covered anyway if Miquel is promoted i guess. Get rid of those hefty wages

That’s great news. Watching his testimonial would have been painful. Good for him.

would be a shame to see him leave before the likes of denilson or squallici. Oh well.

Fair play to him for the wage cut and he seems a nice guy but lets face it, he is not good enough to play for Arsenal and he is not the only one who needs to be cleared out

I am ok with this. If any of the “deadwood” deserve a shot at regular playtime at Arsenal or another team its him.

But then, WHO WILL HOST ARSENAL PLAYER?!?

Humble, under the radar but immense player. I’ll keep an eye on his footballing career and wherever he ends up, I just want it to work out for him. #Gunner.

I am open to him staying or leaving. I like him, seems a nice bloke, but makes a lot of mistakes and I’m not sure we can justify paying him the amount we do. Hope he does well either way.

A good hann-dover imo. If he’s comfortable in Djermany then by all means.

What good player of our beloved arsenal is going to be gone in the summer my son said to me, pod or caz, and he’s only 7 years of age……. Makes ya think

Djourou- Fantastic gunner. If only the money hungry fuckwits that have left our club in the past had his attitude than we would surely have ended that trophy run.

The fact that he would rather have consistant playing time than a cushy seat on the Reserves makes him 10x the player Arshavin is.

[…] a ‘consultant’ says that Johan Djourou wants to stay at Hannover 96 when his loan deal ends. This is not much of a surprise. This season the Swisser played just twice […]

For all people that think he is not good enough he was out cb when we won 2-1 against baccececlona.

Profitprofitprofit / fans misery, get used to it, I have sadly

We should let him go. I think he wants playing time, something he isn’t getting for us and after years of service he deserves that. I wish him luck in Germany.

we should let him go if we get a decent offer