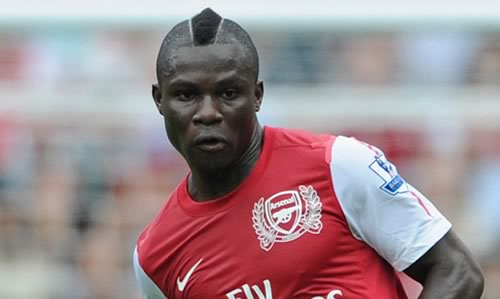 Emmanuel Frimpong has been called up to the senior Ghana squad for the first time.

The midfielder has long stated his ambition to play for the country of his birth despite representing England at U17 and U19 level, and said on Twitter, “Nearly two years I’ve been waiting for this day. It’s overwhelming.”

Frimpong’s career has been curtailed by serious injury but although he’s only made two appearances for Fulham since joining on loan in January, boss Martin Jol is reportedly interested in making the deal more permanent.

“I have been impressed with Frimpong since the start,” he said, “since I saw him play for Arsenal two years ago.

“He is the type of player you would like as a midfielder. He is versatile, he has this mentality and he can play, also. If I had the opportunity to take him on loan again next season then I would do. It would be a nice position to be in.”

With Arsenal apparently ready to let him go, a good display for his national side may open a few doors.

Good luck to him but would still like to see a bit more of him in an Arsenal shirt.

I agree, I think it would be a shame to lose him, especially with all this talk of how we need a defensive midfielder or an enforcer to protect Jack etc.

He may not be the best player, but who doesnt want to see RVP or some other pleb get Frimponged!!

aint you meant to be school ?

at 41 i’m a little too old for school, why, was you hoping to meet up at break time?

I guess it’s called ”having a bit of a laugh”.

@ jacob, I’ll explain it very slowly so you can keep up, ‘Pong has been heard to say that things are “Dench” eg his clothing label of the same name, and also “blud” in reference to street slang for brother. ( i’m 41, but I’m down with the yout bruv, I have a teenager. )

And before questioning my english grammar, try to remember the word “at” in your original post, I cant “be school” as I am a person.

Hope this was helpful.

I always liked Frimpers even though he always looked a little raw but his attitude and desire to get stuck in was impressive.

Yay!! Nice one for africans…like me

ghanains* im cameroonian and arsenal is the sole reason i give a shit.

Would be a shame if he left but he has a lot of talent ahead of him in Arsenal’s midfield so it’s understandable. Will always be a hero in my eyes for confronting that treacherous little scrotum $amir Na$ri. Good luck Frimmy and well deserved call up!

Ye arteta and Ramsey sure are playing great this season,oh ye and the midfield inforcer they call diaby.give me frimpong any day gives 100% all the time

I don’t really got any friends?

I feel kinda sad he´s leaving. Another “britthish” player who could have had a great career with us. It really sucks that injuries broke him. Isn´t he a good mate with Jack also?

he is/was Jacks enforced right through the youth ranks. We would be stupid to let him go.

Let him do what he does – Protect Jack!

I don’t really get all the ‘protcect jack’ stuff. Sure, he often is the target of players who lack his talent, but although a little more protection by his team mates wouldn’t be bad, I think he can very well take care of himself and we surely don’t need a player with that sole task. It’d be sad to see frimpong go though, not for the frimponging or denching but the versatile, combative midfielder he is.

Can only do him the world of good, psychologically at least anyway. Lets hope he kicks on from here.

If only Wenger would develop him into the next Patrick Viera, so he could protect Jack during matches and get stuck in, and all that. There’s our midfield enforcer problem solved.

He shouldn’t be leaving.

Yes. Viera was a toughie. But this one is a bit of a pretend.

“If only Wenger would develop him into the next Patrick Vieira…There’s our midfield enforcer problem solved.”

He’s more than a DM. He has a good eye for a pass and is happy to drive the team forward. The ‘potential’ PV comparison is a realistic one, although too early to tell if he can make the grade.

actualy you are very wrong. first P.Vieira wasnt a DM but a box to box player our Dm was Petit,and frimpong passing game is below par ,he is more an Essien type of defensive player,powerfull and very energetic

why is wenger not using this guy .is it because he didnt player for england.he is the kind of player arsensl needs now .he can do songs job very well .s hard tackler ,doent loosr ball easily csn protect the back four.

Let him go?
Come on! He’s our only specialist dmf. We need guts!!!

Bar watching him get sent off at liverpool I can’t really remember him being in an arsenal shirt, mostly notice him for these Dench promotional stuff and soccer am

He is talented. He was so unlucky to get two big injuries. I hope we give him another year or two. He still only 20. Not everyone is a Cesc or Messi. In the old days it was considered impressive for a 21 or 22 year old to be playing regularly in the first team.

Another player leaving to win trophies….. I jest obviously. Love frimpong cos he cares as much as I do.

A player with potential who maybe shows it 1 out of 4 matches?

Or a role player who will give it his all in any match he’s given minutes?

I’d argue we’ve had too much of the former and not enough of the latter for the past few seasons.

He’s a decent back up who will give 100 per cent every time and, you never know may develop into a Ray Parlour type who is more than just a squad player.

Hope he gets more time.

With the pressure on the Wenger to buy a DM. Its hard to think He’ll have time. But I hope he makes it with us. He and wilshere work well together.

I like Frimpong. He’s fucking demented and we need more players like that. He would show a lot of heart and go into every game oozing passion for the shirt. He’s still not really there yet but I really wouldn’t want to see us getting rid of him.

I totally agree I love this kids attitude and he has real balls on the pitch.
I really think he deserves a proper run in the team.
Come on Arsene give the kid a chance!