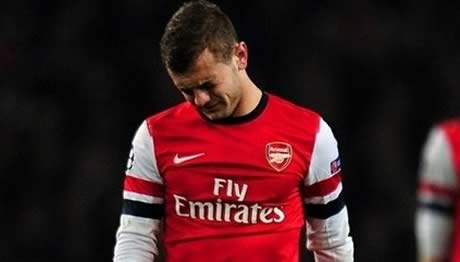 The Telegraph report that Jack Wilshere is out of Arsenal’s game against Bayern Munich on Wednesday.

They say he picked up an ankle injury against Sp*rs and has been in Dubai for a period of recuperation. The fact that it’s this specific problem will worry Arsenal fans after the period of time he spent out injured with an ankle injury, but hopefully the absence is more precautionary than anything else.

Surely, if it were something serious, he’d be receiving treatment back home rather than being sent away, and fingers crossed he’ll be ready for the ten game Premier League run in.

However, there is some good news as Kieran Gibbs may well be fit to return to the team after a 7 game absence after he was taken off in the FA Cup against Brighton.

If he’s in Dubai that probably means he’ll be out for a month atleast.

They had schweinstenger and robben off, now when it was just perfect for us to capitalise on this by unleashing a certain Jack Wilshere, this happens!? why always us?. *sob.

And just when we were looking to capitalise on riberys and bastians absence! Trully Fuck!

could it be that we will see a return of the rvp ( asshole traitor) like incident when he was available for the barca clash at camp nou even after being ruled out, hoping the same happen and this time we fuck bayern
COYG

don’t really give a f*** about Bayern.. just petrified we have already seen this before not long ago 🙁

I agree. I don’t really give a shit who plays in the Munich dead rubber; in fact, I’d rather we fielded a second string. What concerns me most is Wilshere’s potential absence for our 4th-place run-in. He’s been a bright light in an otherwise abysmal season, and without him, I think our chances of seeing Arsenal in the CL next season look very small indeed.

Why has Bale not been injured by a cunt from Stoke yet? They hate diving players (tick), they like injuring Welsh players (tick)… where is Shawcross when his interventions are welcome?

Offer Shawcross a fiver and a bag of crisps.

Crikey! A bit toppy with the largesse there.
You only want him to crock Bale, not suck your dick.

so we see some Rosicky then….maybe?

Oh Lord, you just know it will be Diaby in there. Ah well. Does it really matter?

Now we’re 100% going to get an absolute uber shafting by zeee Germans..
We have to focus on 4th spot, thats more important then ever now.
If we manage to jam 4th spot come the end of the season, we have to spend big in the summer.. or we are well on our way to becoming the next Liverpool

Dont be too hasty liverpool look like they’re coming back

Spending bug is exactly what Liverpool were doing, e.g. £20m for Jordan Henderson. What we need is the right players, not just throw money at anything that kicks a ball.

That’s it then.
*sits back and looks forward to Swansea.

This is just typical arsenal it always just seems to happen to us, big injury big lose, I cant wait for the season that all are top players have a full sesson

One of the more reliable Twitter “in the knows” posted this:

Geoff Arsenal ‏@GeoffArsenal
Change of keeper for Weds, Jack is NOT in the squad, Gibbs is back.

Same source seems to suggest wilsheres’ season could well be over. Unconfirmed ofcourse but with the silent treatment from the club, I fear for the worst…..

Goodbye Champions League. See you in a few years.

As some mentioned, at least this might mean Rosicky will be able to show his skill. Let’s not forget the Ox could possibly go in there as well, maybe his form will clear up.

Probably being rested, as he really needed a break

Just when you thought this season couldn’t be more fucked up..

Good news on Gibbs but fuckin knew this would happen with Jack (if true, and only a matter of time anyway)… Lack of midfield options and a refusal by le boss to play the only alternative Rosicky…. Jacks probably been on the fabled “red zone” for weeks….

Hopefully he’ll be alright for the run in

Time for the ox to get a game in midfield?

Good, to be honest. Even better if its a conveniently timed ‘injury’ rather than a genuine one. Been thinking that it would be safer bet to leave Jack and perhaps Santi out of this one anyway. Perhaps some will see that as giving up, and perhaps it is in a way – but come on, a dose of realism guys. Even with our best 11 it would take nothing short of a full on miracle to turn this tie around, the form Bayern have been in, does anyone really honestly think there’s a hope of us going there and putting… Read more »

Fingers crossed it’s just gamesmanship. Resting him during a lost cause so he’ll be ready for the league. And at the same time, sending a message to the PL that Jack needs a bit more protection from refs

Maybe its all a hoax and jack is in Dubai negotiating with Arab billionaires who will buy messi, give wenger a fashionable coat, somehow solve our defense and then mould adamantium to jack’s bones so anyone who tries to kick him will break his foot.

Wednesday is all about damage limitation – I’d take a draw just to slightly boost morale before the run in.

how can i keep calm? I'm a gunner

his form had been a bit dodgy lately i was surprised at the spurs game, this is not good news. id take ribéry against us with jack on our side anyday. we have decent back up but nothing makes up for the lost of player like him at such an important time…

how can i keep calm? I'm a gunner

also this could be utter balls. until i see it on the arsenal site (who will wait to the very last minute) ill believe it.

It was Liverpool not Brighton, Arseblog

We got 99 problems but the pitch 'ain't one

Hope it’s not too serious as we need him for the run in, lets hope Rosicky steps up to the plate. A good performance in Munich could get the momentum going,even if we don’t get through at least lets go there and leave it all on the pitch. This team isn’t as good as Mr Wenger thinks it is,but is better than the players believe they are. Let’s get top four and then for fucks sake professor use the last year of your contract to splash the cash,bring in four quality players,one of whom should be marquee. COYG!

You know what’s ridiculous?? Look at how many people liked this story ! Why did people give it a like is beyond me.

Rosicky and Ox played well together last year against AC. Both are positive and positive is what we need. If anything, they can use this game as a warm up for the last 10.

I feel terrible for Jack and any injury which hinders his development, but let’s be positive; clearly what we have now is not working, and maybe Jack being injured is a blessing in disguise since it may allow us to try different things in midfield (eg Rosicky). It’s terrible that we have lost two midfield starters this season (Diaby and Wilshere) but does anyone remember the balance we had in midfield at the start of the season, before Diaby got injured and Jack returned? All I’m saying is that this may force a change in tactics, and Bergkamp knows we… Read more »

Just another though: Wilshere has been played as an advanced playmaker recently (attacking mid), but he needs time to develop into that mould since his final passing is not yet up to scratch, and he rarely shoots. Maybe cazorla can play in that role, and poldi returns on the left, or rosicky can play in Wilshere’s AM role. I’ve also noticed that when he is played alongside Arteta as a DM in a 4-2-3-1, he strays forward too often, exposing the defence. Gah, I feel like I’m making him out to be a bad player, he’s not, but I just… Read more »

I agree with you mate. At this point in time i would say that Rosicky is the best in the team at this role. I say we play Rosicky there for the rest of the season with santi out wide and jack in a deeper role. There has got to be some creativity if those 3 are in the squad.

Yeah, I actually am kind of excited about what Wenger might do to the team with Wilshere out.

*What I might do to the team with Wilshere out

The sooner we are out of this competition, the better. Need to consolidate and rest what resources we have from the limited squad to capitalize on the Sp*rs mis-step, as they still have fixtures in Europa.

Everton are without Tim Howard for a bit and hopefully, we can take advantage of this with our game in-hand.

I love this website. Let’s hear it for the ARSEBLOG!!! Andrew, you are doing a bang up job, mate!

We should be starting all the kids against Munich and concentrate on finishing 4th or higher!

And get bashed 5-0? yeah thats exactly what the club needs now. With 10 days since we last played a game, there’s no fatigue or tired legs to moan about so there’s no point in resitng players just for the sake of it. A good resault, even if we don’t go through can be very positive for the rest of the season. Remember Milan at home last season, when we had a really good period after that game even if we went out.

Atleast we have Tomas!

Tomas can save us.

Aaaand whatever lill hopes of a miracle is truly crushed!!!
SHIT

We have two quality players in every position. Our team always plays with great spirit.
Arsenal will win the Premiership and the Champions league.

I believed this for the past 7 years but not this 8th. Simply because we only have 1 striker on the books, let alone 2 quality strikers. Unless your counting Chuba Akpom.

I love Jack, but thinking our season is over because he is injured is shitty stupid fucking shit. No way.

We’ll be fine. We have other good players. 4-1 Arsenal. Bosh it right in.

Lube up fellas as it it gonna get nasty!