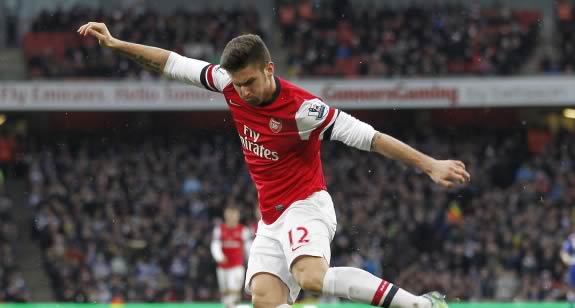 Oliver Giroud has warned his Arsenal teammates that every game they face will be difficult, citing Chelsea’s loss to Southampton as evidence that the run-in could throw up some unwelcome surprises if we’re not careful.

The Gunners have won 5 of their last 6 Premier League games, and while the HFB is confident, he knows that full focus is required for the final games of the season.

“We take the games one by one,” he said. “Spurs have to play against Manchester City and Chelsea so it’s hard games for them. But every game is difficult, we can see that Chelsea lost in Southampton.

“We have to keep focused, concentrated and strong.”

The Frenchman, who got his first league goal in 8 games against Reading, is confident that the team can finish the season as strongly as they need to.

Yes, we are playing well. We succeed to score lots of goals.

“We need to be more concentrated when we are defending, because we need more clean sheets because we dominate the games. We want to be ambitious and keep our focus.

“We want to dictate the games. We are confident. We are used to finishing the Premier League season well. And again this season we will do the same.”

With Giroud back on the scoresheet, Gervinho finding someone else’s shooting boots, and Podolski back in the frame, let’s hope we’ve got enough firepower to get us over the line.

Love the HFB, but when he says that they’re used to finishing the season well I get confused.. This is his first season!

I get the feeling he means Arsenal in general. Just like how us fans say ‘we’ when talking about the team.

……..anyways, back to gervinho. Looking back at his performance, i think everyone is only seeing his performance at face value. 1 goal 2 assists. Which by all rights is great, and well done Gervinho. But when u look closer, his goal was just fortunate, right place.right time 3 yards out. If Santi hadnt scuffed the shot wide he wouldnt of scored. And as for the assists, well anyone could of been in his positiom and made a 3 yard pass and a 10 yard pass. Neither assist was a great pass which possesed vision or technique to make the pass.… Read more »

The guy had a good game, there’s no two ways about. Enjoy the 3 points and a player growing in confidence, it wont do any harm.

Gervinho was man of the match on Saturday. What the xxxx does he have to do to appease you – a hattrick and a handful of key passes and he still won’t be good enough for you I guess

I too can’t stand when a SQUAD player gets his chance and plays utterly well.( gets a goal and 2 assists) I just prefer they stick to their guns and be rather average like before….

why not
Reply to  rossi88

Even if you are right and he was just lucky. The managers job is to assess each players steengths and weaknesses and play them in a successful combination with other players. He did well. Gervinho did well. We won.

I dont know why you bothered to type all of that. Would you be saying the same if cazorla had got gerv’s goal and assists?

I agree that we should buy better players (who wouldn’t). But that’s not really going to help us right now, whereas giving Gervinho the confidence he needs might. And mid-table strikers tend to do pretty well in the EPL (Michu, Ricky Lambert?) As for your comments on Gervinho’s playing, being in the right place at the right time generally means = good strike, even if it was a recovery. In fact, it’s even better that its a recovery, which, to me, means that Gervinho is hungry for goals. And you’re saying that because a teammate like Giroud rushed on break… Read more »

TO Gooner
Reply to  rossi88

I agree Gervinho has his weaknesses and is not exactly ‘world class’, but he was really fucking good against Reading. Apart from the stats, the guy was so involved! Especially in the first half. His shot after he dribbled past three in the box which flew just over, if that were in you’re be comparing his performance to Nasri’s that one game two seasons ago when he made some think he wasn’t a slimy cocksucker. He showed excellent pace and instinct when he broke out of the box for our 3rd, held up the ball to let the slower Giroud… Read more »

i am so optimistic we are gonna finish 3rd……….so it‘s chelsea nd the fucking 5pur2 to fight it out for fourth……….COYG………now is the time

To be fair you could say that about any player in any game, it was just a tap in etc but he had the instinct to follow up in the box and got his reward ffs give the guy credit when its due. He is a frustrating player yes but so was/is theo who has improved a lot in recent times and imo its all about confidence. Both players run at defences with( varying degrees of success )which this team needs when it is stuck in a pass pass loop, i also like the way rosicky does that too. No… Read more »

He had an okay game. Boosted by a goal and two basic assists. Hey il always support my team and the players in it. I wont however hype him up after 1 game against a team that tbh were shit. Hope he continues to improve. But i personally want some quality brought in with an all round better game. Just my opinion

But you aren’t supporting gervinho. So don’t say you will always support the team and players. And who is hyping gerv up? We’re simply saying he had a good game. It would have been 1-1 without him. I’m sure you would have taken that well.

Giroud is such an Ostrich and a useless fellow. if only he could run fast and reason out fast he could have scored so many. Stats show that he has 35 shots or so without a goal. it is because he does not think quickly. all he does is hit the ball and hope. he should learn to be clinical and be speedy.

Remember the taylor foul on Giroud, now I don’t know but he showed real and absolute pace to get on the end of that ball (video anyone?)….maybe he just needs quicker reactions

He’s playing the ‘offside’ position – meaning he has to position himself within usually 5-6 defenders with people lumping the ball at him to whichever spot they want. This usually has a poor conversion rate. When Arsenal play like they do against Reading he gets a goal, with RELIABLE passing in the final third. Of course he has had bad shots… but more than being faster, isn’t it about being in the right place at the right time. Statistics are good, but they don’t show everything… mainly because football aint a one man sport…

Haha, I would hate to be a “useless fellow”

Apart from that no other instant was he seen stretching to limits. he’s generally slow and it costs us. at one point on the counter attack Gervinho went all the way and giroud was still crawling. gervinho had to shoot off target due to lack of support upfront. Am not faulting giroud, am just pointing out that he’s slow in terms of pace and thinking

He’s a target man ffs. His main job is to hold the ball or win Flick ons when we have to play it long (ow, and score goals as well). He aint very fast (but not slow either), but he is tall, psysical and impressiv in the air. If pace was the only thing that mattered in a forward Walcott would be TGSTEL.

he was quick and precise enough on the goal, great finish

Great result for us today. Chelsea now have at least one more exhausting game to clutter up their already packed schedule. I don’t care if they win both the FA Cup and the Europa League if it fucks up their Premier League games. We can catch them.

And at least those Man United cunts will stop crowing now – remember when they were talking about winning another treble?

Cheslea won. That crowds their schedule up even more. However, we must focus on our own games. I believe we have the quality, spirit and mental strength to finish third, so see you tomorrow!

Looks like the only treble Fat Persie’s taking home is from Burger King, he makes Grant Holt look like a supermodel. I also thought it was good of him to make Torres feel better about himself, what with that open goal he missed from 7 yards.

Man u lost ,heh.
so much for their best team ever.

I think Giroud has had a fairly decent first season so far, he is not an out and out goalscorer but i like his style and link up play. He has some pretty deft lay offs in his locker, not bad at getting headers on target and is a real team player. We have pace with theo and gerv and if we get a selfish out and out goalscorer we will have a full and flexible complement

Geez guys talk about being touchy. If because gervinho played one good game against Reading ffs, you know believe hes type of player you want and need then god knows what goes on in your heads. I havent slagged him. Have i once said hes shit ?? No. So actually read a comment before responding. Im just not getting hyped. Im not a hypocrite. You lot all slagged him and worse. I said fair play to him for saturday. But id like more players of a calibre that bring goals and assists consistently. And in my opinion His weaknesses outweigh… Read more »