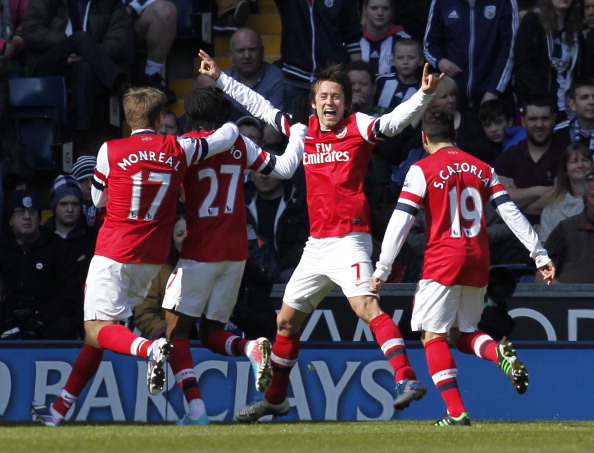 Tomas Rosicky is a big doubt for Saturday’s game with Norwich meaning Jack Wilshere, who is 90% likely to be available, could be thrown straight in the deep end again.

Giving an update to Arsenal.com on the status of his squad Arsene Wenger revealed that the  Czech midfielder, who was Arsenal’s match winner last time out with a brace against West Brom, has a hamstring problem.

“The other uncertainty we have from last Saturday is Tomas Rosicky, who has a little hamstring irritation. His involvement is yet to be decided as well but it’s fair to say that he is a big doubt for Saturday.”

In better news Wilshere, who has been sidelined as a precaution for the last month, and Theo Walcott, who hurt his pelvis on international duty, are back in contention.

“Jack has joined normal training since Wednesday and Theo should join in tomorrow,” confirmed the boss. “They are 90 per cent available for Saturday.”

The only other player certain to miss the visit of the Canaries is the suspended Per Mertesacker. It means Thomas Vermaelen will return to the starting line-up partnering Laurent Koscielny.

Well that somewhat neatly solves a little selection conundrum. Wouldn’t be surprised or disappointed to see cazorla brought back in the middle and one of poldi theo and Ox alongside gerv fill out the flanks. Keep him healthy!!!

Potentially solves the dropping Gerv for Walcott conundrum, play both.

Never thought i would see that comment this season.

I’ve never been a huge fan of Cazorla on the left wing. To me, his creativity and ball-holding capacity is essential for our midfield and putting him on the wing is a bit mis-using him. A bit like Ramsey to a lesser extent.

didnt 7am put up some stats recently that showed Cazorla puts in better goal/assist numbers from the wing than through the center?

Big mistake would be to start with Wilshere in place of Rosicky. I’d rather see Cazorla in the middle and play Podolski. Rosicky’s clever runs interchanged with Cazorla’s movements works for us. This is because they can swap positions SO easily. Wilshere doesn’t/cannot do that, he is not slick playing wide. When Wilshere and Cazorla pair up in advanced areas, the two often get in each other’s way. Also Wilshere doesn’t make enough runs into the box (Like Rosicky for his first) Rosicky can switch to both flanks allowing both Cazorla to switch places and this is what made it… Read more »

both Cazorla and Gervinho*

I hope everyone stays fit, I can remember one match (October?) where a commentator said of the introduction of Walcott, Wilshere and Podolski as subs, “that is some cavalry”.

With this good form I wouldn’t mind this kind of depth would occur from time to time.

Yeah I remember that match too. It was against Tottenham and immediately after they came on, we allowed two goals. A big WOMP WOMP WOOOOMP.

Bring back jack, take rosicky away. Why not ever bring back jack to play with rosicky. Arsenal, Never gets the whole pie. Stupid nature.

What pie is that?

Do you read or do you just skim through? Rosicky has Hamstring troubles!
what part of that statement do you find hard to understand?

If unselected, the form stats for a player are preserved if the manager says he’s injured. He might just be a bit off-peak but rather than loose form we’ll just pretend that its injury that’s stopping him play. It also stops the fans from asking questions about the manager’s selection. Of course, he could also be injured.

the only sam is nelson
Reply to  molly malone

where “he” is whichever squad member you choose

Lol cut the crap Arsene, Rosicky is being dropped to make way for Wilshere…

The Other Sean
Reply to  Sean

Sean
Reply to  The Other Sean

Wonder if Jack brought back into full training early due to Trickys’ hamstring? Not sure how these aggravated injurys work but I’m I nervous that if Jack plays Norwich he could be pulled for Everton, where I reckon he could be crucial for retaining quality possession. Perhaps a second half sub on sat?

Not the admin
Reply to  matt whiteshite

matt whiteshite
Reply to  Not the admin

LOOOOL you got me! im matt w and i love the spurs!

Hey Spud, you can’t be here, its a blog for a first class team! Nothing personal, we’re just better than you.

You spuds should be concentrated on finishing 6th!!!

Hey, There’s a surplus “white” in your last name 😉

Don’t risk Jack or Tomas play The Ox centrally. Shame we are now a club that worry about having enough to beat Norwich.

I don’t thinks its a fear of not having enough to beat Norwich, but more a case of having to win every match from here on in to secure a 4th place finish or better. COYG!!!!

I love Jack,enjoy Theo,but look at the winning ratio with them in the team and without,makesmy brain hurt

As we seem to tick better with Tomas in the middle of the park but he is injury prone, I would love to get Isco in as he seems like just as direct a player.

Ramsey, Jacky-boy, and Isco would be a central midfield to contend with for the next 10 years.

I’ll be right back, I’m just spending £30 million on Isco.

Okay that made me laugh out loud

Honest question – why not try Theo in that role? I’d love to see his pace in that position against the shaky Norwich defence. Just a thought.

TO Gooner
Reply to  Rad Carrot

His game is not technical enough for that. And his off-ball movement, with exception to his understated runs behind the defense, is not good. He will be a poor, poor option in that role.

Arteta-Ramsey-Cazorla in the midfield, Ox and Gerv/Theo on either wing, and Gerv/Theo up top. Rest Giroud, the man is cutting an increasingly tired figure. Bring on Poldi for Gerv/Theo depending on performance later in the game, and get Jack some match fitness by resting Cazorla on the 60-70th as well. With Cazorla moving in, maybe start Gibbs over Monreal to give him a rest too. We gotta look to Everton on Tuesday as well, and we need everyone to be at their best for that game. To be honest I’m a bit worried with TV5 starting with Koscielny, but who… Read more »

I agree it is hard to predict in how Vermaelen will perform. Ideally he has been humbled by his omission and that his focus is now on his performances as player not as a captain. Both defenders have to be on their toes without Per and the whole team, easpeacially, needs to do their bit also.

TO Gooner
Reply to  Bossicielny

I agree with your midfield except Gerv should start, no question. Theo should come in later for Gerv, as I think Poldi will not be used unless its a mus; injury concern and all. I’m also a little worried about TV5 and Kos, and because of that Monreal starting is a MUST. I love Gibbo, but we shouldn’t risk compromising the defensive side of our game any further.

Bossicielny
Reply to  TO Gooner

Oh no I agree that Gervinho should start, just a matter of where, with Theo coming in as well.

It is very good that we can allow players to sit out due to injuries thanks to a better players in the squad capable of playing in the same position. Normally we would be over reliant or let players play with injuries until the last possible moment. After all I guess we had to, but now we can be more relaxed about it. Letting Rosicky rest up and not aggravate this injury would be best for everybody and although he has been amazing we are not short of quality to replace him. Jack for Tomas is not a bad thing… Read more »

What about giving Coq a shot? Coq, Ramsey and Santi. Solves the DM issue, and i think he does a great job – deserves his chance.

God, how come more people are not bummed about Rosicky picking up a knock?? He was exactly the dose of midfield redbull the team needed at a rather low time. I’m honestly worried how we will fare against anyone without him at such a crucial point in the season…

Glory Hunter
Reply to  TO Gooner

Because if we can’t beat Norwich at home without Rosicky, then we don’t deserve a champs league spot!

I hope Thomas comes good. The straight red card means Mertesacker is out for 3 games. Hopefully Vermaelen finds his form as I think his pace would make him better suited to a high line than Mertesacker (as we saw with what happened when he got sent off). Unfortunately Vermaelen does not provide the same aerial presence as Mertesacker, which may be very important against a side like Norwich which has no technical quality but has a lot of mental strength and physical power.

Actually, if I’m not mistaken, vermaelen’s stats are much more positive in the air than Per’s. Height is not everything.

I am here in this job for 16 years, I think I deserve better than lies and misinformation which has only one intention: to harm.

But in all seriousness I think you are probably right. My post wasn’t really well thought out, but I still think the bit about Mertesacker in the high line is valid. I think he has great quality, but he did get caught out at West Brom.

mertesacker is out for one match because he was last man and denied a clear goal scoring opportunity. Its similar to kos’s ban after man city

Are you sure? I thought a straight red = 3 match ban and two yellows = 1 match ban.

Irrespective, this is a chance for Vermaelin to shine and I hope he takes it.

i actually believe there is a cut off date where, red card for anything other than reckless/dangerous play is a one game ban, and it now takes 10 yellows to pick up first 1 game ban instead of 5 yellows.
Could be wrong though

At some point I’d like to see Arteta utilized up front in the CAM slot. I think he’s earned a go at some glory.

You mean he and HFB so close together on the field. All you need is some rain and the game will have to be suspended for all the panties on the field.

The squad has played 46 games this term so by now any player should be able to play any where any time
with who ever in any style. Thats all they do every day of the year. They should know the game by now.

[…] Wilshere back but Rosicky a big doubt for Norwich – that doesn’t seem in any way familiar. […]