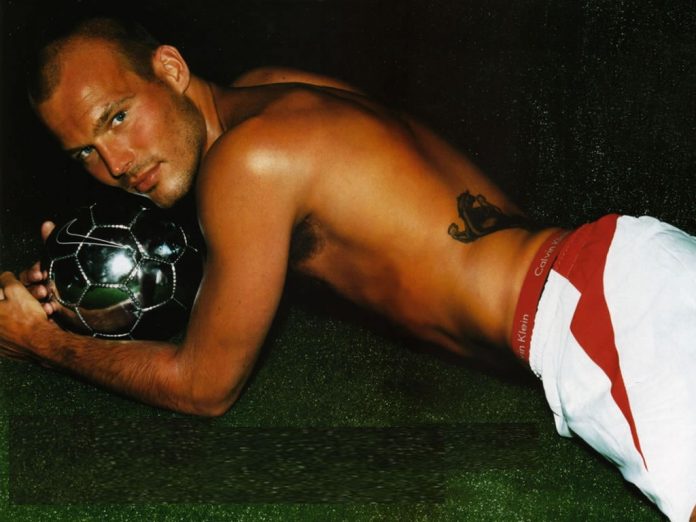 Arsenal have confirmed that Freddie Ljungberg is renewing his ties with the Gunners by taking on an ambassadorial role.

The Swede, whose ball control was as legendary at Highbury as it was on Calvin Klein billboards, secured fan favourite status across the globe during his successful nine-year stint in North London and will help promote the pre-season tour of the Far East.

Since leaving the Emirates in 2007 Freddie’s oiled abs and torso have been on a global tour of Phileas Fogg proportions with a short spell at West Ham followed by game time for both Seattle Sounders and Chicago Fire in America’s MLS, Celtic in the Scottish SPL and even for Shimizu S-Pulse in Japan’s J-League.

Naturally given his international popularity (and cut glass cheekbones) he makes a very marketable choice ahead of a first team trip which without doubt puts pounds before push-ups.

Reflecting on his new role with Arsenal, the former ‘Invincible’ told Arsenal.com:

“I’m honoured to take on this ambassadorial role. The Club has a special place in my heart as everyone knows and I’m looking forward to helping the Club grow.”

Welcome back Freddie. As a special treat, check out the video below featuring all Freddie’s Arsenal goals. Oh how he timed those runs…

Around the 2:30 mark check out Bergkamp’s assist for the 25th goal Freddie scored for Arsenal! Insanity!

brave fella, this freddie. Gave up his body a lot to get the goal.

‘Ljungberg, taking Chelsea on, he’s got the better of Terry, Freddie LjungbeeEEERG!!!’

I watched that game/goal with a murder hangover at a mate’s house, in Manchester, with a few surly Mancs looking on. I went… sick.

I think that game is possibly my greatest experience as a Gooner to date and there have been some great moments.

Some interesting reading… If only it was true

normally j sanderson is a good source. Has he changed?

He’s not a good source.

Do you really trust someone with a barnet like that?

Now he is
Only 26, better than Julian Dicks

Do we really need that?

People who doubt him are insane. He is doing well at Spain, even if he isn’t as important to his team as he was here.

I was making a joke about his age / chant

He is a fantastic player.

But I wouldn’t bring him back to build a team around him like we did the last time.
Like Bergkamp he would be far more benefit as a King Maker rather than a King.

Wow we were great in those pre 2006 days! The video also festures a rarely used phrase “a great run from Alliadiere” whatever happened etc….

Jérémie Aliadière now plays for Lorient and after scoring 15 goals, was on the brink of playing for the French National team….and then he got injured again. Looked an awesome prospect at the time.

This ambassador’s ferrero roche are kept in his Calvin Kleins.
And he will truly spoil you.

We love you Freddie.

My eldest, born in 2002, has Fredrik as one of his middle names. That’s much I loved this fella as a player.

Freddie you fuckin genius. loved every moment he played

Always on the end of the ball into the box. Legend.

My favourite player of all time! Anytime he’s associated with Arsenal, I’m on top of the world

The curl on that FA cup goal combined with a nutty Dixon in the background always makes me go all tingly.

Watching that clip makes me want to cry.
Right now we probably have the most sub-standard team in…… i dont know how long.
the coach is the same, now we just need the “right” quality of players wearing the shirt.

your probably speaking the truth… but this is a positive thread…get with it, think of the good ‘ol days!

This news has made my day! Welcome back Freddie!

I may be wrong but did Ljungberg not have a go at AW in the papers after he left us ?

I think the row was with Van Persie. At the time I backed Van Persie but how I wish I did differently. One a legend in his own rights, the other a mercenary trying to earn legend status at his new club which he never will. Ferdinand, Scholes, Giggs, fact even Rooney are their legends. He will never be a legend at United.

There’s the link if you need it

Great goals!! Oh how we need some of that finishing now!

And i saw some great selfless assists by Henry, what a player.

Great news, Freddie is genuinely one of my all time favourite Gooners…

No.35 is the pick of the bunch, Terry on his arse and Freddie celebrating…brilliant.

The Ghost of Peter Storey

What a great video. Let’s hope that the coach will sit Theo down and show him how to time his runs – although, to be fair, he has got much better this season and suffers by not being able to play with Bergkamp. What struck me too was that none of the goals would have even been considered for goal-of-the-month (maybe, possibly, the Cup Final goal v Chelsea) – they were mostly scored from around the penalty spot, in front of the keeper but behind the defenders. They all count though!

That video brought a tear to my eye. Absolute legend and i don’t use that lightly.

All most every goal so many bodies streaming forward, we need more of this with the current team!!

‘pretty Ukranian ladies’ ad at top! Are you taking money from the owner there? Can he spend some of it on the likes of Neymar, Falcao, Cavani, etc so we can laugh even louder when Bale is sold. (working on some joke which goes something like Bale left so Sp*rs are Baleful but it doesn’t work it needs Baleless really…)

the only sam is nelson
Reply to  Mrmedia

Mr Media, this is why you are seeing advertising for “pretty Ukranian ladies” http://www.adgenie.co.uk/retargeting-advertising/476888/retargeting_advertising_explained.html

Good luck in your continuing search, by the way.

While beautiful to watch, this clip is a depressing reminder of how far the quality of our squad has fallen since those glory days.

Just watching the genius little flicks from Bergy, Pires and Henry makes me long for the days when we’ll see players of that quality again wearing an Arsenal shirt.

The only player we have now who would have been good enough to make the invincibles team is Santi. Sad state of affairs. I hope this summer is the start of changing that and getting some true quality back in the side.

Funny, in a compilation of Freddie Ljunberg’s goals, the most beautiful bit was still an assist from Bergkamp.

I am surprised that many of his goals came from left side, I always thought that he was a pure right winger

Somebody should sit Theo down and make him watch this.

Oh!! What arsenal fan would give for those runs at present. We are just giving away 15-20 goals by not making such runs anymore…Welcome back freddie..

Love the bloke. Always got stuck in and was a true character. Exact type of player that we need to link again to the club :o)