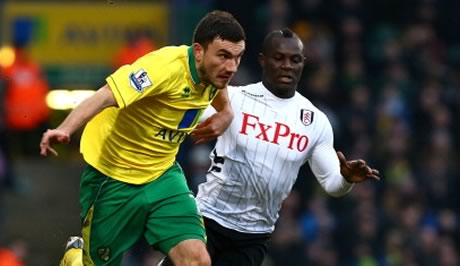 Emmanuel Frimpong has undergone surgery for a knee problem.

Arsenal confirmed the midfielder went under the knife this week and should be back within a couple of months having picked up an injury during Fulham’s final league game of the season against Swansea City.

The Ghanian midfielder joined the Cottagers on loan in January but made just two starts in that time. It’s another blow, following serious cruciate injuries to both knees in successive seasons.

For once, however, the timing appears to be on his side. Coming at the end of the season he won’t miss any games and should, all going well, be back in time for the start of the new campaign.

Who he’s playing for remains to be seen.

Frimpongs return from injury will be like a new signing.

I don't want to make you sad, but...
Reply to  Franchise

Frimpong’s return will reinforce our mental strength (and rapping coefficient).

Thanks newarse but I am angling for the Managers job this season:)

Wake me up in August

If you would like to read some tripe on the net then try this for Internet diarrhoea
http://www.givemesport.com/347235-is-arsene-wengers-time-up-at-arsenal

It appears that there are a few articles like it, so someone is trying to build up a head of steam to get Arsene removed

Meh, it appears to be just some random school kid who writes for free as part of that site’s “Writing Academy” (an Orwellian name for “our way of getting people to write for free so we can line our pockets with ad revenue”).

This is getting ridiculous. I love Frimpong so everytime he gets injured a little part of my heart breaks.

COME ON, FRIMPONG! GET YOUR SHIT TOGETHER!

I’m sorry that this is unrelated but I heard about the attack at Woolwich and the following EDL strike and wanted to inquire about the Arsenal Fans who stay there. I hope all of you are safe.

Is Cottagers the most amusing nickname in football?

Just behind Sp*rs, “The Bottling Thundercunts”

They probably have a logo like the Thundercats one, but with a cock instead of a lion.

Totally unrelated Mr Bloggs, but the puma deal, rumors till or anything more concrete? I find myself absent football to watch and in the castaway-esq match day deprived state of mind this has caused am now running around double checking things and working out a realistic transfer / debt reduction plan, speaking of transfers did you notice the crap GMF is trying to pull again? 5M for Vermaelen obviously ridiculous and by design but galling none the less. Juventus seem to be trying to sign all of the strikers known to man with 1 rahter irritating Danish bloke

Canaries and Toffees are up there for me

Just cut off his legs man!

That guy
Reply to  That guy

6 comments on an article about Frimpong without the D word…..

….and in the 1 minute it took me to type that, two people had written it! Brilliant!

Hey, I know Frimmy can be annoying. But he isn’t a dickhead.. Jeez, some people!

Eh?? I never said he was a dickhead!

Haha I was just busting your balls, it was a pretty bad joke on my part anyway!

To go off topic a little. Mr. Blog, you once talked about the Verminators future and how he is to sit around to take his chance when the opportunity arises. Correct this notion; do we want Per or Koscielny to mess up. Isnt it possible to retain 3 of them even while at their best.

Thought I’d share something with y’all. I got in to work on Monday nice and early so that I could leave this on the screen of a guy that I work with…

Hmmh….he couldn’t get the chance with skunk so he frimponged himself. Dafuq bro?

All I saw was Knee Woe!!

Thought we had signed another Asian fella.

Did you hear about the Arsenal player who never got chronically injured? No? Neither have I.

When will we get a player that is’nt injured, RVP was injured for 6 years and then we sold him, we got good money now spend good money please, we have to compete for first place

Arsenal my DNA love u

That Sums It All Up – STRIKERS! | Talking out their Arsenal