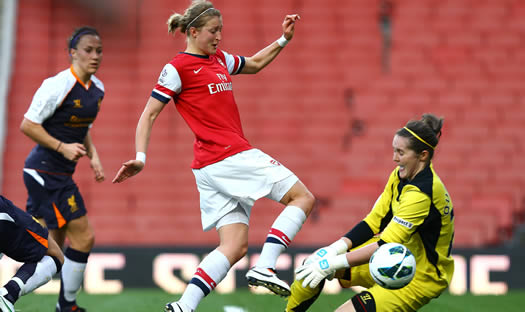 Arsenal Ladies have another F.A. Cup safely on the sideboard and have advanced to the semi finals of the Continental Cup. Now they have set their sights on retaining their league crown, following a slow start to the WSL season. They play one final league game against Chelsea at Borehamwood this Thursday night before the league goes on a two month hiatus for Euro 2013.

Arsenal won the F.A. Cup last weekend and I know there was plenty of determination inside the club to win it back after last year’s exit at the semi final stage. But how important will the F.A. Cup victory be in kickstarting the league season now?

Yes, it’s certainly given us more confidence. I’d say it’s probably given us that winning feeling back to win the F.A. Cup. We refer to it as “our trophy” around here and we were determined to get it back. There were some doubts outside the club after a slow start to the season, but we stuck together inside the club. We’re a very close group.

We showed that in the cup final, we put in a very together, focused and professional performance and got the job done and showed everybody what we’re all about again. Since then, we’ve put another 3 points on the board against Bristol in the league and we’re all really looking forward to the Chelsea game on Thursday now.

In both the 2011 and 2013 finals Ellen, you seemed to be having an almost private duel with Siobhan Chamberlain in the Bristol goal, who was responsible for some terrific saves from some of your efforts. How much of a relief was it when you finally breached her goal in the final minute of the cup final this year?

It certainly felt very special. Scoring in a Cup Final is something every striker dreams about doing and I can keep that memory with me forever now. Siobhan is a great goalkeeper and some of the saves she makes are unreal, but I wasn’t frustrated at any point. We were leading both games so I was relaxed about it.

Siobhan’s such a good goalkeeper and she’s started the season really strongly in a Bristol side that means business. When that rebound fell to me on Sunday, I must admit that I thought to myself, “Right, this has to go in now” which is why I probably smashed the ball harder than I needed to even though it was an open goal. But I had to make sure!

Arsenal had a rocky spell, by their standards, at the beginning of the WSL season. Arsenal have three wins on the bounce now and seem to be back in shape. Is the season breaking at the wrong time?

I wouldn’t say it’s the wrong time. It does feel strange that the season is breaking now and interrupts the flow slightly. We’ve really only just started because we had so many cup ties at the beginning of the season across the competitions. But if we can beat Chelsea on Thursday, it keeps that momentum and means we end on a high note before we all go away and recollect ourselves.

I think a break from the league will do us some good; because we’ve had a lot of games back to back with some injuries to contend with too. We need to get another three points against Chelsea and then we can come back refreshed and raring to go in August. We know that every single point is crucial this year and we’re determined to regroup and go on a long unbeaten run now.

Ellen, you spent most of last season playing on the right of the front three. This year so far, you’ve played almost exclusively through the centre. Do you think that’s your best position?

Yes, I think so. I absolutely love the number 9 role. But listen, when you represent Arsenal, you play where you’re put! There are so many good players here that you don’t pick and choose where you play. I’d play in goal if Shelley asked me to. Personally, I do prefer it down the middle. I like to press the back four, run at defenders and latch onto balls in behind. I’m very pleased to have had so many games there this season. But to play for Arsenal, I’ll play anywhere.

You came through the academy at Arsenal before leaving as a teenager for spells at Chelsea and Leeds. In 2010, you resigned for the club. Did it feel strange coming back?

If I’m honest, it did a bit. I mean, I wasn’t part of the first team when I left, but yes I was slightly nervous about returning. But when I heard that Vic and Arsenal were interested, this was the only place I wanted to come. The girls were very good to me when I rejoined and they took me under their wing. Everyone at the club made it very easy.

I had a lot of good experiences at Leeds and Chelsea, but it’s a dream come true when Arsenal want you. I was in the Centre of Excellence from age 8 to 16, this was where I grew up. So I think it’s natural to have a little apprehension and a few nerves. I had some nerves but no doubts. It was an easy decision and a dream to return.

So how did the club originally spot you aged 8?

I played for my hometown club, Aylesbury Town FC, when I was younger. I was in the boys’ team. I was spotted playing in a tournament for them. Originally, I was invited for a trial at Arsenal but then the club just phoned me up and told me a trial wouldn’t be necessary and that I should just join them. So I did and began training at the centre of excellence.

There’s a fair amount of coverage in the wider media at the moment about Doncaster Belles, who have effectively been relegated by the league restructure next year. Vic Akers has been very outspoken about the F.A’s decision in the press. Is this something the players have discussed? What’s the feeling about this inside the camp?

We’ve not really discussed it in depth because we’ve been so busy with games and we had a cup final to focus on and everything else. But of course we’re aware of it. It’s a disappointment; they’ve been in the top flight for so many years. Along with Arsenal, they’re one of the most renowned clubs in women’s football so it’s a massive shame.

They have star players like Sue Smith, who is such a recognisable face in the women’s game. Hopefully they can put this to one side and have a great season and show everyone what a great club they are. They’re one of the pillars of women’s football and I think it’s a real shame.

The league is shaping up to be very tight this year with lots of teams taking points off of each other. The league is very compact at the moment. It wasn’t long ago that Arsenal were routinely winning league games 10 or 11-0, but that doesn’t happen anymore. Have the games felt more demanding this year, even compared to last season?

Definitely. Since the WSL started in 2011, the competitiveness has been very high. But it’s kicked onto another level this year. A lot of teams strengthened over the winter. Most notably Liverpool, who have invested and so have Chelsea. Liverpool train 5 days a week now so they get more time on the ball, more time together and that’s really showing so far.

It’s much better for the league, which will be very tight all the way through and it will be exciting. Every game you watch is close now and every one you play in is a fight. Especially for us, because teams love beating Arsenal. We’re almost a cup final to a lot of teams. But we love that challenge and it makes us very hungry to retain our title.

Earlier in the season, especially in games against Liverpool and Lincoln, profligacy in front of goal seemed to be a recurring theme. I’ve seen it suggested that, in the past, Arsenal could get away with missing 3 or 4 chances knowing that a comfortable victory was still likely. With the league more competitive that profligacy is far more likely to be punished now. Do you think there’s any truth in that suggestion?

Yes, there probably is. 4 or 5 years ago we’d get many more chances a game and, like you said earlier, some games would finish 10 or 11-0. That doesn’t happen now. The positive we focused on was that we were creating the chances. Now we’re beginning to put them away. We know that other teams can create chances and can punish us.

We’re improving with every game though now and we really feel like we’re in a bit of a groove now in front of goal and we all feel good on the ball. We’ve started scoring more freely and getting confidence from that too. We have many players that can score and we know that, whoever gets a chance, they’ve the ability on the ball to make it count. We were never hugely worried as long as we were creating. We knew the finishing would come.

The WSL may be on hiatus until August, but you’re not. In all likelihood, you’ll be in the England squad for Euro 2013. Who do you think the teams to watch this summer will be?

There are going to be a lot of very good teams. England have a really tough group with France, Russia and Spain. France and Germany are always a threat and they’ll do well I think. Sweden have some great players and a very good coach in Pia Sundhage. They are the home nation so we know they’ll be dangerous.

For England, we know getting out of the group is going to be difficult. We’re focusing on qualifying for the knockouts then taking it a game at a time. We think we’re in with a good chance, but there are many dangerous teams.

Many thanks to Arsenal’s number 9 Ellen White for taking the time out to talk to us. Arsenal Ladies play their last WSL game until August this Thursday night, against Chelsea at Borehamwood’s Meadow Park. The game kicks off at 7.45pm. Admission is £5 adults and £3 for kids. ESPN are also screening the match live for those that can’t make it.

If you fancy taking the kids you can make a bit more of a day of it. Arsenal are hosting a free interactive zone at Meadow Park http://www.arsenalladies.com/news/arsenal_v_chelsea.html for 5-16 year olds from 5.45pm.