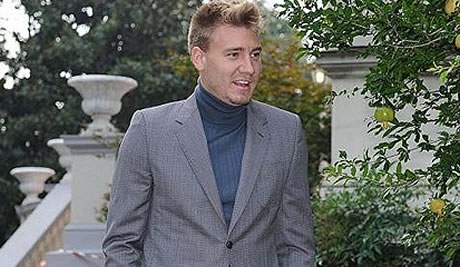 Borussia Moenchengladbach may not be interested in Nicklas Bendtner but Bundesliga rivals Eintracht Frankfurt have confirmed they have held serious talks with the Danish striker.

Under contract at Arsenal for one more year the Gunners are still looking to extract a transfer fee from any interested parties despite the fact the 25-year-old’s value has dropped considerably in the last couple of years.

Just a couple of years ago Bendtner would likely have been outside of Frankfurt’s budget but with injuries, off-field ill-discipline and two unsuccessful loan spells behind him his star has dropped drastically with suggestions he could leave for as little as €5m.

Frankfurt have qualified for next season’s Europa League, a competition they won in 1980 in it’s previous incarnation as the UEFA Cup, but hardly sit in the same category of prestigious clubs previously linked with Bendtner.

For his part, the striker does appear open to the idea of dropping a level having accepted the importance of guaranteeing regular first team football.

What a shame underneath it all he is a good gay

Are you positing the existence of ‘bad gays’?

Ha ha, bad gays are the worst type of gays.

All gays are fabulous.

5 mil for TGSEL – bargain, lets wrap this deal up!

Leandro
Click to flag and open «Comment Reporting» form. You can choose reporting category and send message to website administrator. Admins may or may not choose to remove the comment or block the author. And please don't worry, your report will be anonymous.

My thoughts exactly! 5M is more than I expected he would go for. Eintracht Frankfurt have had a great campaign and with Europa League football are almost too good for Bendtner, if I’ll be honest. I think it’s his age that makes him a good bet for them.

I believe it to be illegal to show any other photo of B52 . Rightly too imo.

Are the Malaga rumours true?

He is the best striker in the world. what an ambitous side this Eintratch frankfurt must be!

Hard to see this happening, unless Bendtner takes a huge drop in wages (maybe his new found “humility” will stretch to that?)

His high wage demands need to be met otherwise he won’t be able to sustain his alcoholism. He’s only going to Germany for the Autobahn’s anyway.

And the Jägermeister, presumably

I’l be back!!!! Hahaha chill out am just kidding!

They should also buy(find) Lupoli and bring back together an absolute beast of a partnership!

Yeah all they need to do then is play in a youth league and Bob’s your father’s brother, they’ll romp it……

They’re going to pay us to take him?

Wenger is mugging off ze Germans.

They are roughly the equivalent of an Aston Villa, or Newcastle. Sounds like the perfect opportunity for him to get his head down and show that he does actually have something to contribute to the game outside of silly pants and drunken misdemeanours.

Something tells me it might not go that smoothly however.

I suspect you’re right. The biggest problem with him has never been a fundamental lack of ability but rather being too quick to believe his own trash talk instead of working hard.

I really do think that if he’d put as much effort into his football as he did into talking about his football he would actually be a very good striker – maybe not a world beater but pretty damn good none the less.

He’s decent but i dont think hes ‘very good’ as you state. He scored goals at Arsenal cos we create chances galore, at Sunderland he was piss poor and the least said about his stint at Juve the better.

1 day he realise the pinnacle of his club football career was playing for the Arsenal.

The course of true arrogance never did run smooth… If he couldn’t do it at Sunderland I doubt he’ll do it at a villa/newcastle level team. good luck to him though (kind of)

He has done quite well as a striker for Denmark. Even against quality sides. That said, I won’t miss him at Arsenal.

Frankfurt are a good team. They only just missed out on Champions league to Schalke on the last day. Since they are not under the spotlight so much, their best players may remain with the club. I think it would be foolish to pass up such an opportunity.

What are the chances B-zero-point-zero-zero-zero-five-two (and his pushy father) will turn down all these offers because none of them are in the Champions’ League this season?

No chance at all. Because at some point in life everyone grows up.

Signing players to long term highly paid contracts whether they perform or not is ludicrous. It is so illogical. Surely there is a better way. Or are so many people benefiting from this massive injection of wealth that it is self perpetuating.

Go tell that to City, Chelsea, PSG, Monaco….
They all signed players on dumb ass wages and didn’t even remember they were in the squad.

That’s modern football and the competition we are up against to sign players.

TGSTEL’s goal/game ratio for us was better than many of our strikers, just a shame he’s such a tit.

If it is just modern football why did you criticise TGSTEL. Players are happy to collect their wages and cop out when the going gets too tough like Squilacci Arshavin and all the others who went on loan still being paid the same salary whether they perform or not ie Chamak, Park, Djourou. Another thing PSG, Chelsea, Man City won premierships recently…did we?

We need to win the Capital one cup or FA cup or both and challenge for the title.

If we could fluke a champions league that would be absolutely fantastic.

If we get good players and win a trophy and challenge for the title the mood at Arsenal will change and we will be seen as a club with ambition, trust me things would start going our way.

Mid table Bundesliga is about right for TGSTEL.

Real shame that his boot size is larger than his IQ. Has a great strike rate for Denmark which shows that if he’s on it he can be very good. He’s just rarely on it.

Look at how he is masking his chins under that polar neck. I know he is still Arsenal, but he’s a proper twat

法兰克福确认正在同本特纳磋商 | Arseblog新闻中文站
Click to flag and open «Comment Reporting» form. You can choose reporting category and send message to website administrator. Admins may or may not choose to remove the comment or block the author. And please don't worry, your report will be anonymous.

Hope Frankfurt have good public transport links. On your bike, TGSTEl,
if you prove us all wrong and it actually works out for you, then best of luck.

5m, is it euros or pounds? Plastic buttons will do fine, thank you Frankfurt.

TOGooner
Click to flag and open «Comment Reporting» form. You can choose reporting category and send message to website administrator. Admins may or may not choose to remove the comment or block the author. And please don't worry, your report will be anonymous.

He has to put the word ‘seriously’ in there when speaking about signing Bendtner, in case people thought he was joking. How things have fallen for TGSTEL.

man u are the best
Click to flag and open «Comment Reporting» form. You can choose reporting category and send message to website administrator. Admins may or may not choose to remove the comment or block the author. And please don't worry, your report will be anonymous.