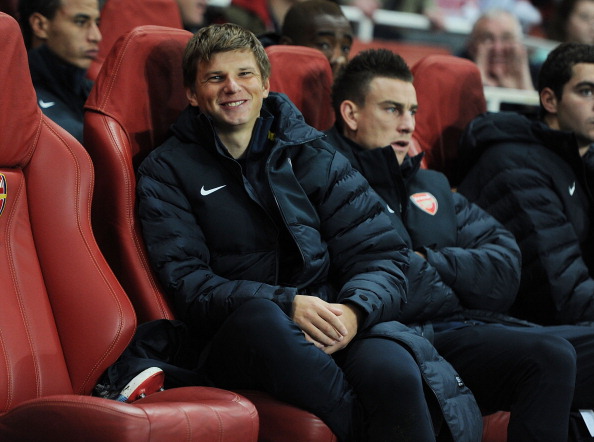 It’s looking increasingly likely that Andrei Arshavin will again return to Zenit Saint Petersburg once his contract at Arsenal ends next week.

Having helped his former club win the Russian title during a short loan spell last season the 32-year-old, despite being a shadow of the figure who left in 2009, looks set to be offered the chance to wind down his career at the Petrovsky Stadium.

According to Sport Express personal terms, including a reduced salary, have been agreed with both coach Luciano Spalletti and Alexei Miller, the chief executive of Zenit-owners Gazprom.

“We have to remember that Arshavin is a product of Zenit,” Miller told the newspaper (translation by Sky Sports).

“I think it right that a product of Zenit finishes his career at his native club. Arshavin is a great Russian footballer and a great Petersburg sportsman.”

Andrei has been linked with clubs in England, Turkey and even Azerbaijan in recent months although his emotional attachment to Zenit has always seemed the most likely draw.

Arseblog News has also learned that Marouane Chamakh is edging closer to an Emirates exit with a number of clubs in France thought to be keen on luring the Moroccan back to Ligue 1.

Former club Bordeaux have already made overtures, while several less ‘glamorous’ options have also contacted Arsene Wenger and the player’s representatives, Mondial Promotion. It remains to be seen whether Arsenal attempt to sever ties with Chamakh in the same way they came to an agreement with Denilson although the possible signing of Gonzalo Higuain should be a bit of a hint that his future certainly doesn’t lie in N5.

Well, that and the fact he was sent to work with Sam Allardyce for six months…

Zorro in the box

Good luck to him, hope he finishes his twilight football years well.

Good player maybe out of posistion but lacked motervation but he saved out season when he joined us and two season after he was top of the assits table.

I think he to much criticism after his first season with us cause everyone expected him to score all the time after he scored 4 at Liverpool.

I wish him all the best i wouldnt say he was a flop tbh.

In Soviet Russia, all the pies eat you!

Do you mean genocide? because I don’t think you do….

That was uncalled for.

All the best to Arshavin. Always have a soft spot for the guy. Will never forgot those 4 goals at Anfield – the last one where he bust a gut getting down the pitch to finish to make 4-3 still gives me goosebumps when I see it!

I loved the guy, I loved that moment. Unfortunately in the end it was his gut (and what it represented) that busted his career.

He’s not a flop he’s just a bit of a lazy fucker sadly, he had the talent jut not enough get up and go

With Hulk apparently heading for the exit door in Russia, perhaps we can offer a solution to that problem too. someone ask Tony if the Hulk would survive in the big smoke. Adams and his increasingly eccentric manner is enjoyable but might risk alienation from the clubs hierarchy.

Tony couldn’t even manage Gabala but he thinks he knows it all.

All the best to Arshavin. If only he kept his owly look, who knows how long his form would have lasted.

I thought Arshavin was waiting to gain British citizenship so his kids can go school in London.

I bet he couldn’t believe his luck: 90k a week for stuffing his face with meat pies and winning nothing.

It’s a good thing that he had the best manager in the world to look after him.

Lets not hate Adams. I get what he was saying. Ivan said we need a younger board then we hire Chips at 73 is it? Although if your good at your job then it doesnt really matter bout age.

The Rooney comment i would have understood when he was younger. But getting towards late 20’s i think would be just fine. Although it wont happen, unless its chelsea.

You might not realise that the club is coming to a turning point, where the future of the club, financially and sporting wise, depends upon their marketing business strategy. I am not quite sure what PHW does at Arsenal, but as chairman he must have good relations with the manager and the public. With the number of public gaffes Adams is making recently, maybe it is not a good appointment. Chips is also a veteran business man and his experience may be vital to managing relationships. What we need is a board and owner that shut up and do their… Read more »

I respect your opinion, however I disagree that the board and owner need to sit and do nothing. What made Arsenal what it is today is visionaries like Dein who spoke up and wasn’t scared to shake things up; such as hire a little known Arsene Wenger.

I agree that one does need visionaries, but at the right time. At this moment we have a manager that most other clubs would kill to get, we having increasing revenue and a strategy for the immediate future. If the manager fails to deliver the players full potential, if there is a cash shortage or other problems, then you would consider changing the dynamic. There is no need for anyone to bring in radical change. Arsenal has always been about taking the right steps at the right time. This club needs stability for now because all the immediate sponsorship deals… Read more »

I agree with what is being said here regarding the need for responsible, good background men but in my humble opinion, a couple of characters and footballing greats (like Ljungberg) among the suits makes the club more attractive to fans.

Obviously that stops short of hiring Adams as the chairman, but it would be nice to have some Arsenal greats associated with the club.

‘Ivan said we need a younger board’ but isn’t 73 younger than 77? He never said how young they were making the board….

He also never said that they’d hire a complete twat just because he’s younger. Not to say that Adams is a complete twat, but he’s said some twattish things about his former club in the recent past.

‘Well, that and the fact he was sent to
work with Sam Allardyce for six’
lmao

I don’t care about Arshavin anymore, he wasted his greatest years eating too much and sitting on his ass instead of working hard to be the very best he could. He is no longer on our payroll so good luck to him, i’m sure he’ll regret it in years to come.

In My Opinion only of course.

‘he wasted his greatest years eating too much and sitting on his ass’… have you just described Fatgooner?

Sure he was lazy, but judging by the photo, he’s put plenty of effort into releasing a potent “silent but deadly” at Koscielny, and seems rather amused with the result. Laurent, understandably less so.

Dear James Abalawiaye–
You apparently know less about politics than you do about (admittedly bad) jokes. And thanks to everyone who liked him calling me a genocide–it’ll just take me a minute to warm up the drone that all Americans have and support the use of.

I don’t get why Tony Adams comments have caused a stir. If Rooney can’t discipline himself while winning things for Man U, do we really think he’s going to apply himself professionally in London? Lets not forget the guys a absolute moron. Lets hope he stay oop north and all out Grannies can sleep easy in there beds tonight.

Exactly corp. and all these muppets that are Turning on the greatest arsenal player ever makes me fucking sick, all the bloke has said is that arsenal are not good enough to win the league as we stand at the moment. Can anyone disagree with that.
If we sign maybe three top quality players, yeah we maybe able to compete and Adams I’m sure will agree, but until that happens show the bloke some respect. The arsenal board have it all to prove yet, because as of now we have signed no one and its all speculation yet again.

Totally agree, Volders. Adams was my hero, too.

Wayne Rooney at his best is a brilliant player, but I’ve got a feeling that he is already on his way down. A quarter of a million quid a week contract for him would be a massive gamble. His attitude stinks, too.

I would prefer us to go all out for Lowendoski instead.

Yes Arshavin was brilliant. He was a great buy at only 17 million pound. h
He only cost us 18 million quid in wages . His 30 goals per season drove us to three Premierships and two Champions league titles. Zenit paying Arsenal 20 million quid for his services shows what a fantastic investment Arshavin was for the club. Brilliant management I say.

Volders, I think some fans find TA’s honesty unsettling, they don’t like hearing the truth and think a legend should just tow the line like a good company man. He’s made out to be some eccentric nutcase, however he did a good job at Pompey and as I understand he did a very good job in Azerbajan. Lets not forget this is the same man who was honest enough to tell Dennis Bergkamp that it was a shame despite all his talent he’d won nothing at Arsenal before the 98 double.

I guess we won’t be signing wanyama then? He’s a decent player and of a defensive mind. Ideally, I would like to see us bring in a player prone to patrolling the pitch with an eye on winning the ball back should Arteta get injured.

Contrary to what the media have been feeding you, Wanyama was never a priority. Not good enough based on one decent season in the Scottish League.

Tony Adams is a fucking legend, I saw him play his first game for Arsenal, and I saw him play his last game. I remember the 79 cup final and I remember Anfield 89 but the only time I’ve cried was when he ran on to Steve Boulds defence splitting pass against Everton and smashed the ball into the back of the net, then stood there, arms outstretched in the sunshine. He has not said anything untrue and all the “Jonny come lately’s” slagging him off either never saw him play, or are just showing their fucking ignorance. The guy’s… Read more »

He’s a legend as a player and a club hero but as a manager/pundit, let’s just say I worry about him.

TA great guy, leader, legend and all that but wouldn’t have in as manager. We’d be relegated if he were.

Shearer was Mr. Newcastle, but look how making him their manager turned out. Tony Adams was and is an Arsenal legend, but you don’t really need to be an intellectual in order to be a great defender (though brains do help, I’m sure). The skills and determination he had as a defender and a Captain are not guarantee of success in business management or coaching. Celebrate him for what he was superb at, but don’t let his enthusiasm and love for the club fool you into trying to shoehorn him into a job that his skills and talents are not… Read more »