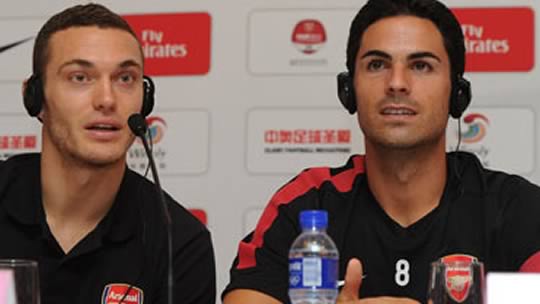 Arsene Wenger says that Thomas Vermaelen will remain captain despite the Belgian being dropped for the final part of last season and being absent through injury.

It’s thought the former Ajax man could miss the start of the season with the back injury that has kept him from the Asia Tour, but the Arsenal manager says he’s not inclined to make any long-term changes.

“I cannot stick with him now because I think he will miss the start of the season,” he said. “But certainly, he will still be the club captain. He had a back problem.

“He came in with it and he couldn’t practice until now. He’s out for how long we don’t know. There is nothing behind that at all. There is no bad feeling because he didn’t play at the end of the season.

In his absence Mike Arteta has worn the armband, and will continue to do so, but clearly there are implications if he were to be made skipper on a full-time basis.

On the other hand, Vermaelen is no longer an automatic starter, so it remains to be seen how he’ll cope with that role and the position as club captain.

Ultimately though, it’s not a huge issue by any means, we just don’t have much else to talk about.

who is Mike Arteta?

Would be stupid and disrespectful otherwise.

Arsene Wenger does not want to upset Wenger, I suggest the situation is a little embarrassing for Vermaelen that he’s being referred to as ‘club captain’ while he’s not a starter anymore. Kos and Per are the better defenders.

Mikel will be captain for the foreseeable future.

how is the third choice CB the captain :O

We’ve got three talented cb’s. Each of them are more than capable of doing the job and I think trying to put these three in any kind of order would end up doing one or more of them a great disservice.

The Lawyer
Reply to  goonero

Seriously? Who upvoted this? Kos is far and away our best CB.

Vermaelen was never that great in my opinion, just masked poor defensive abilities with a few goals and decent technique. He’s too slow and not agile enough anyway and now seems to have totally lost his confidence. I’d personally cash in if I was Wenger as we could get a decent amount for him.

Stupid decision specially when he is not a regular starter..

Captains in football are largely irrelevant.

Until they are relevant.

Until they are sold, only to become irrelevant again.

Could not disagree more. The captain should be the backbone of the team at the peak of his career to drive/inspire the other players. Adams, Viera, Henry, Fabregas, RVP

Ashburton Groover
Reply to  A N Other

Cyril Washbrook
Reply to  A N Other

If he’s not selected, then we have perfectly adequate on-field leadership in the form of Arteta and others. Captaincy isn’t totally irrelevant, but I don’t think it’s a big issue for Vermaelen to hold onto that position.

No need to change captain? HaHa. The clearest hint yet that Vermaelen will be sold this summer.

New tactic perhaps? To deflect attention to the club captains and spare the other squad members from long drawn transfer sagas?

I like your logic. Can’t say the same of your squeamish personality. Here’s a thumb down.

And why Per is not a captain given that he is ever present and consistent.

I’m optimistic about Vermaelen this year. With the right coaching I think he can be as effective as Koscielny was last year considering how similar they are in terms of athleticism. However they dont seem to be compatible together, maybe we should look to bring in another cb in the Mertesacker mold and have Verm v Kos and Mert v whoever competing for places rather than 1-4th choice centre backs

Makes sense. Stripping him of the captaincy would only cause tension, while letting him keep it doesn’t hurt anything. Arteta has done well with the armband on a temporary basis, and I haven’t heard anything about him or anyone else moan about not having it on a full-time basis.

Tension for sure, But wasn’t the problem with the Verminator that he lost confidence in himself… his ability is plain for all to see and if you don’t believe me just look at the other names he shares defence with when he plays for Belgium But if confidence is his issue, stripping him off the captiancy is not gunna help that. Besides, Lego hair Arteta is big enough and hunky enough to not let a pidelling little issue of who is officially allowed to tell the ref he is a buffon get in the way of dazzeling the opposition with… Read more »

It’s hard to be honest for Wenger to make a change for the captain’s role. It might involves emotional issues with the player. It has been unfortunate for Vermaelen to be injured , but I’ve seen the likes of Djorou , Almunia , Fabianski and Gervinho given the chances eventhough their performances were below par , I can’t see why it’ll be different with Vermaelen.

Remember when T.V came in as a no name player and had a fantastic season, Bullied players like Drogba, Rooney? Also Covered at LB and almost sure at DFM once or twice?! Anyway my point is he was consistent and playing like a leader When RVP Gael, Nasri and Fab Left Arsenal who was still there playing while injured at leftback Putting body on the line? Covering for players like Mertasacker and Krocieney? Maybe Verms should not go up the pitch so much or become a dfm.. i think players at arsenal playing 3 4 different positions is an annoyance… Read more »

When did Vermaelen bully Drogba and Rooney/ We lost 2-0 and 3-0 to Chelsea in his first season, and I think one of the goals was a Vermaelen own goal or horrible mistake or something. He did not play at DFM, and I’m fairly sure that he only started covering at LB after that.

I really don’t understand why people keep on suggesting Vermaelen should play as DM, you need much more than good tackling to play there.

Someone like Capoue (going by 7amkickoff’s recommendations) would be much, much better for us.

This team sucks* the Arsenal FC lacks leadership and I think this season will be our worse.

We got relegated in 1912, which is probably the worst season in our history.

So what do you think we’ll do to outshine that one?

Crikey! I’m so stooopid. Duplicate posts are consistent with my nickname.

As you don’t appear to know where it comes from.

Arsenal for the new season is surely a bad bet

Verm has never dominated players like Drogba and Rooney dude (I remember one game in which we lost 0-2 to Chelsea and Verm made 1-2 costly mistakes). In fact, I think Verm has never played well against big teams since he arrived at Arsenal.
I understand that it’s very difficult to strip the armband from Verm while he’s not leaving anywhere, but in my opinion, he’s loved by the fans because of his fighting spirit and goalscoring ability rather than his defensive ability. Which is more or less worrying.

also, what happened to his goal scoring ability? one of my first games at the emirates (I don’t live in London so they are a rarity) was arsenal – wigan in 09-10 season. verminator got 2 great goals, one of them a half volley if I remember correctly, and i’ve loved him ever since. it has always been the case under wenger that scoring goals is more important than not conceeding them, but I think bouldy’s influence combined with a slight drop in overall squad quality has reduced the impact that our defenders have in the opposition third. remember how… Read more »

I have been saying this for years Verm is overrated he came with a big reputation cause he scored some amazing goals first joining us.

But he is always shaky in defense e.g. http://www.zonalmarking.net/2010/04/09/thomas-vermaelen-arsenal-positional-errors/

Im sorry but Koz and Per will be starting most games i dont see why Verm is still captain especially when Wenger has already come out and made the point that Verm has struggled with the preasure of being captain.

I believe verm will get his chance at some point during this season, it just goes to show how over the years we’ve relied on certain players regardless of they’re form. Verm as club captain will feel like he now has something to prove when that chance arises, which will be beneficial in every circumstance. No need to change captain unless they have plans to sell him.

Surely Bendtner should be captain? He’s not in the side either.

For me it is not an issue that he was dropped, that the other two defenders are better because the captain should be droppable. But there is an issue with the fact that he is not captain material whilst Arteta clearly is.

I agree with this move only because why change a winning formula. Verm was technically our captain for the last 10 undefeated games of last season, despite Arteta deputizing the entire time. He was benched, and that is likely to continue, so why change? What will be interesting is to see who gets the band after Arteta if he’s off the field. For Newcastle I believe it was Per?

I think to much is made of who wears the armband, I don’t recall it being a problem when we went on our superb run of games at the end of last season.
As for the coming season, the only duty the captain will have will be to lift the premier league trophy ….GOYG

Much as I love mert I havent given up hope that verm an kos will become the most radical cb partnership in the pl.

Too similar. Mert’s the balance.

Do people still think we will sign a new CB and should we sign a 4th choice or a new competitor to start?

yes we do need one, and I’d prefer us to buy a ‘utility’ defender. someone like ivanovic for chelsea or micah richards for city (who can switch from RB to CB pretty effortlessly). I’m not saing we should go after those two in particular, just that someone like that would be great for the arsenal.

@Rg We are having enough trouble trying to sign a bloody striker!!!!

Yeah, I wonder what the problem is. Is it Hiquain wanting to stay as there is a new manager or is it RM want more money. My guess is the latter given the Suarez bid.

Every season we sell our captain. This year because nobody knows who is captain we can keep our captain.

Walcott, akpom, eisfeld, poldi, giroud 2 and olsson the scorers… We completely outplayed them and bashed them to bits. Good warm up.

and, it has to be said, the indonesian fans provided an awesome atmosphere. as much as the summer has made me sceptical and a bit depressed regarding transfers, it was really nice to see how happy the fans were at watching the arsenal.

His form will decide Vermaelen’s future as a player and as a Captain at Arsenal.

I’ve always said as soon as TV got made captain he went backwards very quickly. Very good player but maybe not a captain.

I was obviously pissing about lol But i still think there is a starting place for him in team, TV needs to sort out his positioning and fitness maybe all round game.. If u ever played football u would know the center of the park ie CB DFM CM is the core of the game usually.. Lets be honest if arsenal really want to compete then quality is needed not just potential. Mert once committed to challenges / tackles is out of game, Protection for gk and defence is very important and in my eyes they all kinda have to… Read more »