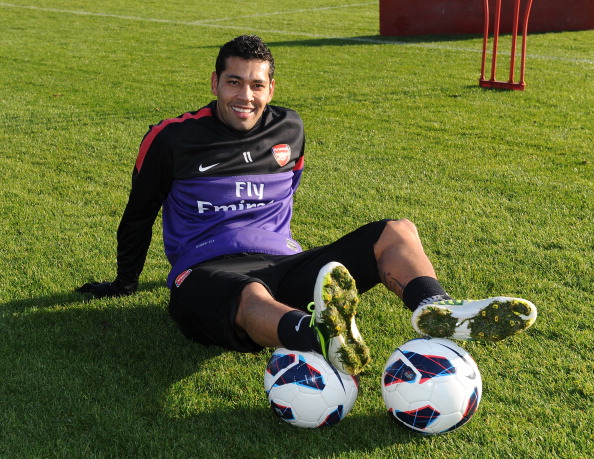 According to reports in the Brazilian press, Andre Santos is set to sign a one-year loan deal with Flamengo (the club, not to be confused with the dance) today.

The left-back, who enjoyed a fruitful first spell on loan with the Rio outfit in 2005-06, has been deemed surplus to requirements by Arsene Wenger since January and has been looking for a new club having recently completed a short spell with another homeland side, Gremio.

Flamengo’s current manager, Mano Menezes, coached Santos for a year at Corinthians before the player moved to Europe and has spoken warmly about a possible deal. (translation by SambaFoot)

“We all know André [Santos] well. He played for Flamengo in the past besides working with me at Corinthians.

“He is an experienced full-back, has played in many places, has a lot of quality, a player that will add a lot if everything works out and the deal becomes official.”

It would appear, much like compatriots Denilson, Wellington Silva, and Pedro Botelho, that Santos is destined to see out the rest of his Gunners contract in a state of perma-loan. Perhaps the prospect of playing for his country at the World Cup next summer will give him the focus he all too often seemed to lack at the Emirates.

Wow, from being considered to be better than Gibbs at some point, to a weak link in the team, then to being abject sh*t, and then loaned out, this is the story of the fat brazilian. We should never sign brazilians, they eventually become fat and useless.

Please tell me the story about the time Silvinho and Edu became “fat and useless”….

Ever heard of the story of Ronaldo, Ronaldinho, and Adriano?

So two Brazilians who got fat and one who put on weight and then got thin again counts for all Brazilians? Wonderful generalization there…

Ronaldinho can walk into any team in the premier league today. Thumb down all you want but Gaucho is a legend.

It was a joke you literal gobshite’s.

What about Gilberto Silva?

You beat me to it.

I knew I forgot someone. But to forget the best of the three is embarassing. He should have been made captain.

Except when they’re called Gilberto Silva

Indo’Gooner, you’re Arseblog News’s version of ‘Dial Square’ over on Le Grove. Seriously on a massive downer with a negative opinion on pretty much everything.

Santos was panic buy stop gap signing who actually was starting to look good before getting injured in the dead rubber CL game against Olympicos.

But he’s gone now, will ponce some or all of his wages from us for one last year but thta’s Arsenal life.

Didn’t i say he looked good at some point? Well sorry if im negative, i guess 8 years of winning absolutely nothing does make you super positive about everything huh?

It’s going to make you ill mate. Step back a bit. 8 years yes but we’re competeting at the right end of the table and the ride is freakin bumpy but i’ll stop short of saying keep the faith.

You a glory hunter or something?

Le Grove? Isn’t that the place that Dyson’s hang out. You know – vacuums so empty, they don’t need bags

it’s a hive of negativity, in-fighting and the home of trolls but it’s definately entertaining. Drop a comment in there along the lines of ‘Wenger knows’ and it’s like setting a grenade off…….. watch em go mental

I love that place, I go in with a different and fight the good fight as much as I can.

“Is this the £32m striker Wenger needs? Arsene’s going senile! Fabregas homecoming back on the cards?”

If this is a fat Brazilian, I’d like to know what a lean one looks like: http://i.imgur.com/6bERZfb.jpg

Just fuck him off. Fed up of loans. ive never heard of so many. its not like were spending money buying players. Just pay him off and get on with the players that actually matter. Gd luck, bye bye Andre

I never….EVER considered Santos to be better than Gibbs. Put it down mate

Apart from Slyvinho, Gilberto and Edu, all the other Brazillians at Arsenal have been dissapointing…hopefully this happens to Fernandinho at spurs too 🙂

I will offer him a burnt offering…of kebabs, if only for him to leave

You’ll just have to hope he hasn’t seen Diamonds are Forever:

Good observation. Did Ronaldo senoir become fat at Madrid? What about Robinho at Man City. May be they should be playing in German. Are Dante and Gustavo fat? the answer is no. More needs to be done to consider brazilian signing. Surely Denilson and the big man Baptista became fat!! What do others think?

The Real Ronaldo(as you know there’s only one Ronaldo the rest are christianos) never became fat at all his European clubs till when he went back to brazil.

All this is the result of the socialist pay structure that we’ve had in the last few years, Arsenal is filled with expensive fringe players who we cannot seem to move on because we pay them much more than the average clubs in other leagues.
I hope he gets sold in the next transfer window. I still remember one of the champions league goals he scored and the one against chelsea, never really showed any real ambition or desire.

Hate the racism on this page. If he is going then I’m glad too – but only because he’s shit, not because he’s Brazilian. We’ve had good and bad Brazilians, French, Spanish and English players over the years. Santos is a particularly egregious example of Wenger’s incompetence when it comes to signing quality and then offering that player a realistic wage. This bloke would have struggled to hold down a place at Millwall – yet somehow he found himself picking up 60k a week at one of the biggest clubs in Europe. How the fuck did that happen? So many… Read more »

What I find more worrying is that Millwall players could play for Brasil!

Didn’t think Brazil was a race.

Every time you start saying something respectable you shoot it down buy needlessly having a dig at Wenger. EVERY manager signs shit players now and then. The thing is that Santos is actually a decent footballer but not a great defender. If given the chance to sign a Brazil international full back for £5 million it makes sense to go for it. Same with Squillaci. He was a France international with a decent reputation when we signed him. It just didn’t work out for either of them, whether it was the system or the pace of the league. It’s more… Read more »

Fergie the Gooner
Reply to  Fatgooner

While the proactivity in offloading deadwood players is admirable I worry that our squad is going to be paper thin because we don’t look like we’ll be bringing anyone in to replace them. They may not have played often, but even the likes of Santos got a run out every now and then due to injuries, suspensions, league cup, squad rotation etc…

Selling Bendy and Chamakh no attack would be the shiznit of our transfers out, the ones before them were easier. D.Law, make it happen.

Can understand the thumbs down, I agree. Getting rid of Bendy would be the greatest removal since the money-changers in the temple. Jezus Christ Dick!

Nice bloke, likes driving fast, dribbling, scoring and pies. Doesn’t like defending. Round peg, square hole, best of luck to him in a league where full backs are more like wingers 🙂

What an absolute waste of money….£8m on Santos, £8m on Gervinho….and now we are penny pinching over proper quality players. A joke.

So Santos signs a deal to buy a dopey pink bird that stands on one leg. So what? Next news item please.

Look, I know that’s a shit attempt at a joke, but I’m not in the mood.

…..signs a deal to buy a dopey pink bird that stands on one leg.

And why weren’t we in for the Heather Mills deal?
Wenger Out!

Dick Law Is a real DICK

Nahh, indonesians dont havr slanty eyes. The rest are pretty accurate though, with exceptions. I didnt generalise about brazilians, but brazilian footballers’ attitude in general. They dont have the best work ethic in the world, which when they reach a certain age, will get them to be fat and useless.

“I didnt generalise about brazilians, but brazilian footballers’ attitude in general”

So you did generalise then.
Adriano and Ronaldo getting fat near the ends of their careers and Ronaldinho putting on a bit of weight when he was taking a break from playing can not be applied to all Brazilians. Are Cafu, Dunga, Romario, Bebeto, Gilberto Silva, Sylvinho, Edu, etc fat?
No. Your argument is stupid. It’s down to the peoples attitudes not their Nationality. Moron.

Indonesian gooner? Well I really hope not all Indonesian are stupid like you.

I would say Indonesian Gooner is an ex-pat as I don’t believe actual Indonesians would be so short sighted.

What makes you so sure that arsenal are paying Djourou & Coquelin wages. I doubt we are, Hamburg have enough money & I would assume Freiburg can afford £30,000 a week.

I have plane ticket and a treble double big whopper in hand. What’s his address?

There’s bragging and there’s outright lying about your *ahem*. . . . . .but what we don’t wanna hear about is what you do with it.

Jernade Meade’s been picked up by Swansea if anyone was worried about his whereabouts!

You’ve a very good point there

Oh no not santos what ever shall we do Oh ana that obese brazilian thiago silva just came out and said all indonesian 30+ footballers are fat and lazy who knew?