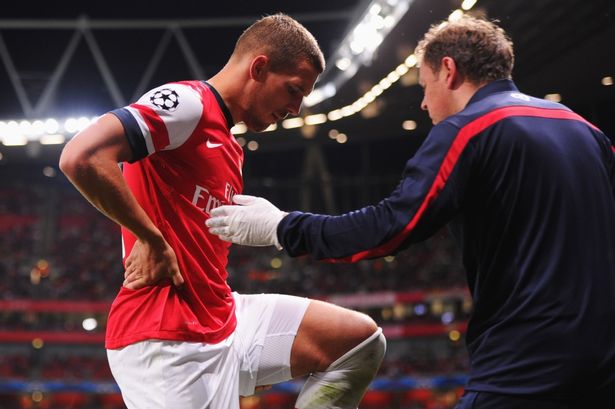 If you are a ramsey hater please stand up! Where are all of you? Come on?

Haha, a tip of the hat for your honesty. To be fair, Ramsey had a very profligate period which coincided with the team playing poorly, so I understand why some fans were frustrated with him, to a point. Always hated the booing though.

For me, the main moral here is that when a player loses form, they should return to the basics, as Ramsey did late last season. That gives the player a platform to build on. Ramsey is just now adding the flair and technique we know he had, but it’s built on exceptional (but basic) midfield play.

Cheers to him for proving the boo-boys wrong.

good to see some honesty. who will the boo boys pick on next time something goes wrong? 6 days left for mr. wenger. or it will be your name they chant.

I am not going to lie. I was against Ramsey playing last season, he was woeful at the start of the season. But you know what? I really wanted him to prove all of us wrong, and credit to him, thats exactly what he’s doing.

He looks world class this season. Lets hope he’s fit for spurs because they have ALOT of energy in their midfield this season with Capoue & Paulinho…. but not as much as our RAMBO

Infinite – number of “we work very hard” i’ve heard from a certain bloke.

and then a 5-2 on the away fixture

Yes, grown men, as opposed to our wonderful Santi who is almost certainly an enchanted garden gnome

0 – Number of fit left wingers in the squad

This would be nice for Sunday:

Apparently both Mata and Ozil are rumoured to be unwanted. My heart tells me “HELL YEAH! £40 million bid incoming” by my head tells me “Chelsea and Madrid would be class A lunatics to let these two go”.

Here’s to hoping that maniacs do indeed run those clubs.

Stone
Click to flag and open «Comment Reporting» form. You can choose reporting category and send message to website administrator. Admins may or may not choose to remove the comment or block the author. And please don't worry, your report will be anonymous.

I just can’t see Chelsea letting Mata go to an English club unless a certain Wayne Rooney would go the other way. But here is to hoping!

Mata and Ozil to complement General Cazorla? It would be like listening to a Bach masterpiece performed by Menuhin at his best.

Hence, I might start watching a couple of matches per season overall altogether since it would be so great that’d be too emotionally consuming, and one has always better things to do.

So I advocate against purchasing either of these two players 🙂

remove “altogether”. see, i can’t even write while thinking about these things!

How many clear goal scoring chances did a combined giroud/sanogo spun between themselves? we clearly need a world class C.F coz in big games you have to take the slightest of chances you are presented with and from today I wonder how we will fair against a tougher opposition.

Arsene mate, do something!

Giroud is 3 for 4 this season – wouldn’t start bashing him just yet.

Yes it’s all merry merry for now. I try to look ahead. Giroud gets a thumb up for all his good work, but look at it this way? in a big game can he be the difference? like rvp aguero, dzeko, zlatan have been for theirs?

I want a top notch C.F even giroud himself says he would like that. It’s the missing piece I think.

If I remember correctly, it was Giroud who scored from the slightest of chances in the second leg against bayern last year, if that is what you mean…

0 = the amount of ECL matches Spuds will play this year. ha

Trust me, I’ve followed Özil since his days at Werder, he’s been the best attacker on Germany for a few years now, and would be the best player on Arsenal by a good margin. He’d be a superb signing.
Also, silver lining about podolski, might only miss one PL game b/c of interlull after Tottenfuck game!
Özil + other signings + 3 points this weekend = orgasm… AHA!

Please refrain from using names of non- Arsenal players, we’ve been burned more than once on that front this window.

Ozil may be very good, but I doubt he’d be better than Santi by any margin whatsoever.

Thank god, having another player as good as santi would mean we will have to play with just 10 men to give all the other teams in bpl at least some chance…

This time last year a lot of people were on the Rambo hate wagon. Being one if those, I am glad to eat my hat. The end of last season and the beginning of this one have shown that he is exactly what Wenger thought he was… Top top quality! ;o) keep it up boyo!

Gunner From Another Mother

And it’s Arteta-less mind you…

Can reveal that Arsene made 4 phone calls today, 1 to madrid for 3 minutes 46 seconds. Also 3 calls to Mrs. Wenger for a total of 1 hour 42 minutes 16 seconds detailing his reasoning for adding carrot to a Bouillabaisse, believing it to be a versatile vegetable that has the special qualities he is looking for. Moreover he repeatedly invited Mrs. Wenger to look through the cupboards and show him any better vegetable to finish the job.

this made me chuckle….

0- number of thumbs up this idiot above me shd get for his idiocity….

Where are these Ozil rumors coming from? Madrid’s VP can’t be that dense, can he?

Especially with Ronaldo claiming he wants to be the prodigal son who returns to manuer.

ImarnuelAFC
Click to flag and open «Comment Reporting» form. You can choose reporting category and send message to website administrator. Admins may or may not choose to remove the comment or block the author. And please don't worry, your report will be anonymous.

Its all just daily mail bullshit. Most journos are cunts who love anarchy and like to stir the pot.

As an anarchist I take offence at the association

Its all just daily mail bullshit. Most journos are cunts who love anarchy and like to stir the pot.

数字矩阵：阿森纳2-0费内巴切 队草扬帆 | Arseblog新闻中文站
Click to flag and open «Comment Reporting» form. You can choose reporting category and send message to website administrator. Admins may or may not choose to remove the comment or block the author. And please don't worry, your report will be anonymous.

1 number of a homeless playing(raul mireles)

Never a Ramsey hater as I always have and always will give full blooded support to anyone in the glorious Red and White. Especially as Ramsey always played with heart and never hid even when it wasn’t going his way.

But I have to admit when he barely made a positive contribution for 2 seasons I seriously doubted wether he had it in him to make it at the arsenal.

Certainly didn’t see such a massive improvement on the horizon so credit (and scepticism!) to those who knew all along how good he’d be.

Hope everyone keeps Ramsey in mind the next time they boo an Arsenal player.

Ps its fine to doubt a players ability. If you boo your own players you are a cunt. Without exception.

3- number of new disciples Arsenal got after yesterday’s show

Arsenal 2-0 Fenerbahce: one job done, now do another | Arseblog … an Arsenal blog
Click to flag and open «Comment Reporting» form. You can choose reporting category and send message to website administrator. Admins may or may not choose to remove the comment or block the author. And please don't worry, your report will be anonymous.

ozil…would love to see him in an arsenal shirt.