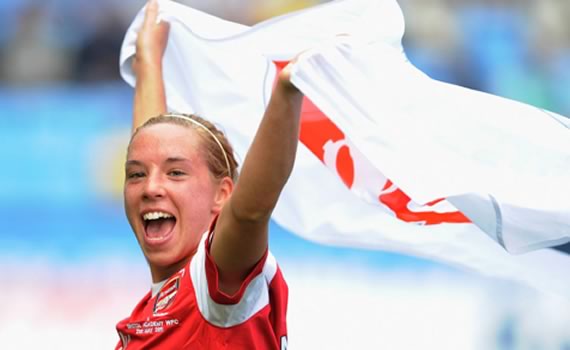 Arsenal may not have won the league this season for the first time since 2003, but you won’t find the girls’ moping or bleating about their loss or the points deduction that took them out of the Champions League places in this season’s WSL. The Ladies’ still managed to bag both domestic trophies and have started their Champions League journey for 2013-14 this month.

Arsenal have to win the tournament for the first time since 2007 this year to qualify for Europe’s premier tournament again in 2014. “We think we’ve got every chance,” Jordan Nobbs tells Tim Stillman.

Only at Arsenal could winning two trophies be considered as not quite achieving your ambitions for the season. For a lot of the girls this is the first time they haven’t won the league. How does the squad feel about 2013?

Our main aim is to win the league and we want to do that year in year out, but we’ve had a new manager, players going out and coming in and on the whole we’ve been pleased with what we’ve done. To get the two domestic cups means we’re still really high and positive as a team.

When you look back, it’s only one game that we actually lost in the league, it’s the draws where we’ve let ourselves down. We’re still chuffed with the two cups and we want to take that confidence into the Champions League with us this year.

One of the themes of the season for Arsenal has been missed chances. In all the games we didn’t win, you came away feeling Arsenal should have won them all. Arsenal even hit the woodwork four times in the 4-0 defeat to Liverpool in April. None of the top 4 scorers in this year’s WSL are Arsenal players however. Has Shelley spoken about this? Do the girls’ feel this is where the difference has been?

On the positive side, we know it’s down to us. We’re not making silly mistakes and conceding, we’re not scoring when we’re making lots of chances. At least there’s something identifiable and fixable that we can work on and know that next year when we get those chances, we need to score them. Every goal counts in this league now.

It’s something we’re doing more work on and it’s something Shelley has definitely picked out from the games we’ve played this year.

Moving onto your role this season. Shelley seems to have tweaked the midfield a little this year and now you’re playing ahead of Kim Little in the midfield three behind the striker. How did this come about? Was it something Shelley discussed with you at the start of the season? Or did it evolve more gradually than that?

In the first half of the season, I was more in the number 8 role, then there was just one game where I played in the number 10 role and Shelley told me to keep going. I took what she was saying on board about getting into pockets of space and the first time I started there, I scored 2 against Liverpool and from there I just felt confident there.

I love playing with the girls in midfield and on the whole, we do try to rotate anyway. But in the 10 role I got a lot more goals in the second half of the season, so Shelley just encouraged me and it’s worked really well. She’s given me excellent advice in training and it’s certainly worked for me.

You scored 6 goals in the WSL this season and got one in the F.A. Cup Final. You’ve become an established member of the Arsenal and England starting XIs. Where do you think your biggest improvement has been this year?

I think adding goals to my game has been a plus and I’ve scored a few more this season. I look at other players in my position and I think I should be scoring more, so it’s been pleasing to have improved there, especially in the second half of the season. My Dad and Shelley have said to me that my movement has got better.

When I was younger I sometime sran around like a headless chicken but I think I’ve improved on that. I’ve learned a lot from the likes of Kelly Smith and Kim Little and I’ve been trying to pick up on what they do.

Obvious follow on perhaps. Where are you looking to improve next year? Is there a particular part of your game you’ve identified?

It’s going to sound really clichéd and boring, but everything! I don’t think there’s any specific thing, you can always improve on every aspect of your game. In the past year, with the Arsenal and England squads I feel like I’ve progressed a lot and my confidence has been high, but there’s still so much I can learn from other players.

Passing, shooting, movement. If I do keep my place in the England squad, I’m going to be coming up against top quality opponents and I’ll need to be on my game all the time. Hopefully playing those sorts of games can help me learn to keep that intensity, to improve in the number 10 position and go from there.

You have a footballing background. Your father Keith was a tough tackling centre half for Hartlepool United. Did having a father in football give you an edge as a child? Were things quite structured? Or did you just kick a ball around in the back garden with him?

My father pushed me in a very positive way. He told me at a young age that if I really wanted to be a footballer, I could be. He believed in me. He took me everywhere, to midweek coaching sessions and he just told me to keep working hard because he knew from personal experience that it would pay off. He loves the game too, so I was in the park with him kicking a football around pretty much 24/7 and he enjoyed that as much as I did.

He’s been a massive influence on my career and he always will be. Even now when he watches me he gives me advice, tells me what to watch out for, he’s always talking to me about the timing of my runs. I’ll always listen to him because I respect his experience. I know he’ll always tell me the truth too, whether I’ve had a good game or a bad game. He’s been a major part of my career, both when I was a kid and now I’m playing.

Looking at another influence on your career. You signed for Arsenal as a 17 year old from Sunderland, which must have been quite daunting, both moving to Arsenal and away from your home in the Northeast. But fellow Mackem Steph Houghton joined Arsenal at about the same time. How important have you and Steph been for one another?

Steph’s always been someone I can talk to and someone that helps me on the pitch too. But we travel together too when we go home to see our families and those little things are very important when you’re young and away from home. You need your home comforts and me and Steph are big family people too, we try to get home as much as we can.

Steph is a great player too and we both know how much time and dedication it takes to have gotten to this point in our careers so we understand each other. She’s always been a big help.

Looking ahead to Thursday against SSHVSM Kairat. Arsenal have a commanding 7-1 lead from the first leg. Will Shelley be looking to make changes and give some of the squad players a run out do you think?

We honestly don’t know. Shelley doesn’t post the team till the matchday. Everyone is still working very hard in training and everybody at Arsenal is fighting for their place no matter what. Even though we have a big lead, we don’t want to go into the game and not be scoring as many as we should be because that could affect us down the line.

Shelley will still go out with a strong team I think. She puts a lot of emphasis on working hard in training and she’ll always go with whoever she thinks is training the best. That’s one of her major things, if you’re training well, then you’ll be starting games.

Due to the points deduction in the WSL this season Arsenal finished outside the Champions League places in the WSL. Arsenal now have to win to qualify for the tournament in 2014. Does that add a little extra pressure?

I suppose it does a little, we were very disappointed because it was kind of out of our hands that we didn’t qualify. Though we still drew games we should have won so we have to look at that too. But we always want to win the Champions League, that’s always our aim. We regularly get to the semi finals and that’s where we need to take the next step.

From what we’ve been doing in training and the way we played in the second half of the season, we are in with a very good shout of it this year. We have every chance, we’re all confident and we all believe in each other, we think we can regain what we lost this year.

Finally Jordan, what has been your personal highlight of the season?

Being part of the England squad. With England and Arsenal it just never gets old putting on an England shirt or an Arsenal shirt. No matter how long I play for, I think that will always be the case. There’s nowhere I’d rather be right now at club level than Arsenal and being involved with England. Arsenal are a big reason I’ve got into the England setup, I wouldn’t be where I am without Arsenal so the two go together. But putting on an England shirt has been my highlight.

Many thanks to Jordan for taking the time out to speak to Arseblog News. Arsenal Ladies play the 2nd leg of their Champions League tie against SSHVSM Kairat on Thursday at 2pm, at Borehamwood’s Meadow Park. Tickets are £5 adults, £2.50 concessions and are available on the gate.

Good luck with next season. I’m sure she’ll help bring the league trophy back where it belongs.

One of the reasons that I love Arseblog so is that they pay attention to all facets of Arsenal, more than just Ozils and Girouds. Great to see some more Arsenal Ladies coverage, we should be just as proud of their achievements – which are staggering – as we are of the accomplishments of the men’s team. Love yer work Tim.

I’ve actually taken an interest in the Women’s side once Liverpool and Bristol overtook Arsenal in the league, made it more interesting etc, it’s also hard to not know what’s going on in the WSL (or the Brazillian League for that matter) if you follow Tim Stillman on twitter haha

Can we bring her up to the men team?