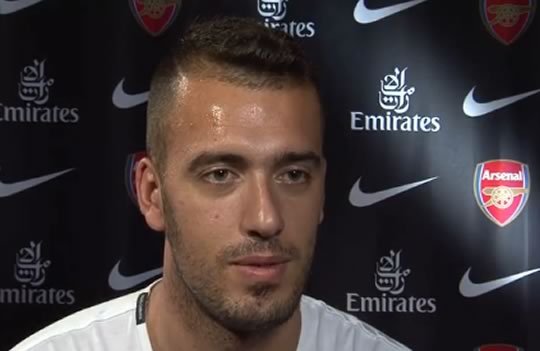 Emiliano Viviano says it’s a dream to be part of the Arsenal set-up and believes the friendship building between the club’s goalkeepers is breeding a team within a team.

The Italian international, who moved to North London on transfer deadline day from Palermo following an eye-catching season at Fiorentina, hasn’t yet featured in the first team but despite his lack of match action explained that he’s enjoying life in England.

“I knew for about a month that Arsenal wanted me,” Viviano told the Arsenal Magazine. “They had the choice of me and some other good keepers though – and I’m so happy the final decision was an Italian!

“Now that I’m here, it feels great. It’s a dream for me. I’m proud to be here and I want to say thank you to the boss for making it possible. Now it is important that I work hard every day to show my quality.

“I know a lot of things about the Premier League because I love the English way of thinking about football and sports. It is different – every team seems to have a full stadium, whether it is a small club or a small city.

“Of course I have seen a lot of Arsenal and its players too. This is a good team with fantastic training facilities, some of the best in Europe, and a lot of passion.”

Currently third in the pecking order behind in-form Wojciech Szczesny and a revitalised Lukasz Fabianski, the 27-year-old also underlined that strength in numbers can only be positive for the team.

“I know Fabianski was a little unlucky with injuries last year and I’ve seen Szczesny play a lot and he is a great goalkeeper. I will work hard with them both to compete, and consider it a good thing that we have other goalkeepers of such quality here.

“It is a positive fight. We will be at work together every day and I am sure there will be great friendship. We will help each other and, with the goalkeeping coaches, be a team of our own.”

Unless there are injuries it’s hard to see Viviano getting much game time in the coming months. His biggest hope is probably for a run out or two in the Capital One Cup but he seems like a level-headed chap and one who could be playing the long game.

Arsenal have an option to buy him permanently next summer and with Fabianski likely to leave the club on a free when his contract is up he could well be around for a while longer. At 27 he still has his best years ahead and with international experience already under his belt he’ll no doubt want to be part of the clamour to replace Buffon when the legendary 35-year-old finally steps down from Azzurri duty.

This is a strange signing….you’d think players move on loan to actually play or worse case scenario atleast be second choice.

We need to see what he can do though maybe Arsene signed him coz every now and then scores long range scorchers from his own goal.

I’m actually abit surprised hes in the running to be an heir to Buffon, I thought that would automatically go to Sirigu. He needs to be playing regularly, but the same could be said of Fabianski if he wasn’t so injury prone.

Boruc regained he place because Szczesny was under-performing last season, Boruc has played great in this early season’s campaign for Southampton, and Fornalik has a thing against Fabianski (whom he only recalled recently).

Mmm you got me thinking of Buffon. In his heyday, wow, he was some keeper

Silverstre for the Ballon d'OR
Reply to  Niall Liszt

Niall Liszt
Reply to  Silverstre for the Ballon d'OR

Mmm, he’s still a great player now, I know, but when he was at his peak you’d be hard-pressed to find a better keeper. I think history will put him right up there with Zoff and Yashin as one of the greats, a real privilege having him play in our generation. And such a crazy bastard too, gotta love that

Let verm take a cue. This the arsenal, not some spurd club

Henners
Reply to  A cùnt for £100m? What a waste of money

I think the reason for why viv is on loan with us is because wenger realised that fabianski is going to leave in the summer, which i believe is when he’s out of contract. Then from the inital loan he can buy viv. I personally love fabianski, and fair play to him, he played brilliantly for us, and i dont blame a man for leaving when he doesn’t play but i hope he stays!

i hope for fabianski’s sake that he goes… he is a great golakeeper, and it would be a waste of his talent to play second-fiddle to szczesny… he desparetely needs to play regular football, and he is good enough to be a first choice goalkeeper in any of the top leagues in europe… and who knows, by next summer, one of our youth goalkeepers might be good enough to be a third-choice first team goalkeeper…

Anyone know if there’s any truth in this Valdes rumour? It’s one of those stories which doesn’t seem to go away which suggests it’s more than just a slow news day at the tabloids. Jens came to the grove at 33 and did an incredible job and Valdes is only 31. Would be nice for Szcz to have some proper competition, as apposed to only losing his place due to lack of form. On a different note, and I know it’s in Arsenal’s best interests but I don’t share blogs’ bitter and twisted view of international football, how is Jack… Read more »

This was just posted by the live feed reporter on BBC Sport website,

GOAL – Belgium 1-1 Wales – Aaron Ramsey (88 mins)
In the goalscoring run of his life, Aaron Ramsey runs on to a cute ass from Craig Bellamy to stab in through the keeper’s legs. What a strong result this could be for Wales!

So, what exactly is he trying to say there ? Made me chuckle.

To have the prettiest wife at home?

Interestingly I already have one.

Vivo is better than Flappy.