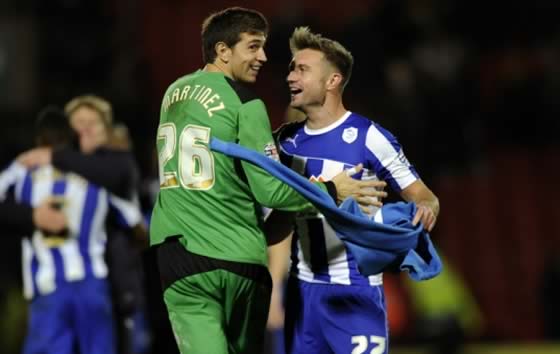 Goalkeeper Damian Martinez is to spend the rest of the season on loan at Sheffield Wednesday, the club have confirmed.

The young Argentine has made 6 appearances in the Championship for Wednesday, and spoke last month about his desire to stay longer than was originally planned.

“I love Wednesday,” he said. “I really want to stay here and extend my contract. I spoke to Arsenal and I said I will not be going back to the club as first choice so I need to play.

“I want to give my team clean sheets and that is what all goalkeepers want. I was giving everything in training and then I got a chance to play in the first team and show every game that I can be the number one.”

Martinez had displaced experienced England international Chris Kirkland, but has found himself on the bench again in recent games. He’ll be hoping to play more regularly, however, as the goalkeeping situation at Arsenal becomes quite open in the summer.

Lukasz Fabianski is out of contract in the summer, while Italian Emiliano Viviano has yet to play a game and will undoubtedly go somewhere else when his loan spell expires.

That will leave Arsene Wenger looking for a reliable, competitive number 2 for Wojciech Szczesny, and if Martinez can play often enough, perhaps he’ll be the man to fill that role.

Anyone know how he got on when he did play?

Not sure why this was even thumbed down once. It’s a set of facts… facts people!

But not a set of facts that tells us much about how Martinez performed. It’d be interesting to know what the fans say about him. Anyway it’s great he’s enjoying it there and getting some games. I really rate him and hope he gets promoted to our second choice next season.

Martinez has done really well, overall. He was unlucky to be dropped after the match against Bournemouth, though he should have saved the second goal a shot on his near post.

“But not a set of facts that tells us much about how Martinez performed. It’d be interesting to know what the fans say about him” surely that’s opinion based rather than fact based…

Hope this will do to him what Brentford loan move did to Szczesny. Wish him luck and plenty of clean sheets.

I love Wednesdays too, theyre my favourite day of the week actually.

Played 6, won 2 lost 4 actually, and also played 60 mins in the wigan game which was abandoned. 1 clean sheet. Done ok but I dont think hes good enough to keep kirkland out the side. We’ve either signed him cos kirky’s off, or he’ll most likely be spending a fair amount of time on the bench. Good shot stopper but lack of experience shows with decision making, which can be a bit rash. His kickings not great either, but he could definitely go on to be a very good keeper.

Thanks, that’s interesting and deserves the thumbs down even less than the facts-supplying comment above. I imagine someone took against it for having the temerity to suggest that Martinez isn’t yet perfect in every respect. That’s why he’s on loan, ffs – to gain some experience and learn from his mistakes. If he was already perfection we’d be using him ourselves and not Szczesny.

He’s certainly not perfect, but he might not reach his peak as a keeper for another ten years! I think we’re pretty well looked after with kirkland, but if he is off I’d be happy enough with martinez for the rest of the season. There are 6 or 7 sides in this league where he’d probably be first choice, its just a bit odd that we’re strngthening one of the few positions where we are actually good enough!

I hate Sheffield Wednesday. I hope he keeps lots of clean sheets, but I hope they’re all 0-0 draws.
They used to be such a bogey team for us, apart from that year, ’93 if I remember correctly, we beat them in two cup finals!