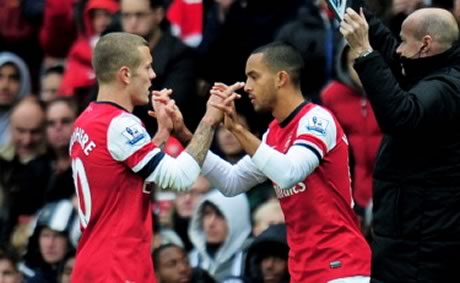 Theo Walcott says he can’t wait to play Sp*rs in the FA Cup and believes the attacking intent of Tim Sherwood’s side will make for an open game at the Emirates.

Saturday’s clash at the Emirates marks the first time the two teams have been paired in the FA Cup since Arsenal’s victory in the 2001 semi-final, and with both teams in decent form following a hectic Christmas Walcott spoke enthusiastically about the challenge ahead.

“I can’t call it. It is one of those games that is going to be very open. Tottenham, since their new (managerial) appointment, have done very well to be fair to them but, like I say, they won’t want to play us.

“It’s at the Emirates, we’re trying to make our stadium into a fortress and we are starting to do that.

“These are massive games, the games that everyone wants to be part of. We’ve had a busy festive period going into the New Year and everyone needs to recover well which we have been doing. Hopefully players can come back but [for] Tottenham, we’ve got to be right up for that. I can’t wait for that game.

“Hard work will decide it. If everyone’s doing their jobs right and working hard for each other – that’s what it comes down to in the end.

“We have that trust in the dressing room. Everyone trusts each other and when you have that you’re going to build on that and go from strength to strength.”

Walcott has been in impressive form since his return from injury last month netting five times and providing two assists. Given the paucity of attacking options at Arsene Wenger’s disposal he knows he needs to deliver a big performance to further cement his credentials as one of the club’s big game match-winners.

With five goals against Sp*rs since he moved to Arsenal, including three across the two 5-2 wins, he certainly knows how to do some damage. Let’s hope he can produce the goods again.

Sp*rs sherwood not want to face us right now.

yo
Reply to  Heroldgoon

Anselmus
Reply to  yo

Hey mate, don’t diss sluts. They don’t deserve that kind of insult. Imagine, being talked about in the same sentence as that rubbish club.

If Sp*rs go gungho like they have been recently we could absolutely destroy them on the break. In that case Ryo, Walcott and Gnabry as the front three on the break could be quite fun to watch.

Ryo is too green to cause any damage

Green? Have I missed something?

He means inexperienced and young, although how people think players get experience without playing is a question that I always like answered

It’s not easy being green.

Fergie the Gooner
Reply to  heihaci

Ryo is still not physically strong enough to ward off fullbacks stuck to him like glue, as witnessed in the Carling Cup loss to Chelsea in October. However Kyle Walker is a shit defender and who is constantly marauding forwards brainlessly. Ryo’s speed and decent crossing of the ball could be dangerous against Sp*rs tomorrow in what should be an open FA Cup game. Wenger thinks England are shite in World Cups and Euros partly due to a lack of a winter break and I agree. Ozil/Ramsey/Giroud/Gibbs are all getting two weeks off which could be vital when we face… Read more »

I’m glad we’ve to this tie as I’d become too blasé about the FA Cup in recent years. Here’s to thumping the Spuds and their overrated former cone-collector Sherwood.

This made me lol so hard.

I cant see Zelalem or Akpom coming on unless we’re 5-0 up with 10 mins to go & they’re down to 9 men with Adebayor in goal.

Yeah, I think the Cardiff match proved that some small teams are a bit hard to beat at home as well. Arteta and Cazorla in for Zelalem and Akpom would be fine.

What does he mean ‘he can’t call it’? Defeat is not an option young Theodore!!!

remember the invincibles
Reply to  goonernim

I think what he really meant was (I may be paraphrasing a bit): “I’m not allowed to call it or people will think me an arrogant cunt. But really, who the fuck are we kidding?”

I read somewhere, amongst the many NY resolutions, that the difference between try and triumph is the ‘umph’. give it some umph Theo. Go on then. just some umph.

and the Y instead of the I….

Ozil should not play, let him recover well for villa game please

Would the 9 days not be enough?

I have a feeling he wasnt injured, it was just his winter break in disguise.

Gilberto silva is back trainning with Arsenal.All the way from Brazil mind you. the awesomeness on the trainning ground tho?

was just wondering if it could really be him as i tried to get a closer look at the out-of-focus training pic! dint hear anything about it though.

With 9 days to Villa we should put out as strong a team as possible, Cazorla is still working his way back to top form as is Podolski. Wilshere should be very fresh also.

The Cup will be 3rd of our priorities but we have an opportunity to knock out q potential winner here, I’d certainly like to have the option if winning this trophy as a back-up!

Hopefully as ‘our man on the inside’, Mr Sherwood will do what he has to do.
But we have to accept that he needs to at least pretend to the press eh?

It would be sensible to play Verm instead of BFG just to guard against injuries. Gnabry on the left? or central with Podolski on the left? They will set up to counter I think. Rosicky, Wilshere, Flamini as midfield trio.

Surely you put your best team out to keep your run going. We have just won two games in a row so need to make it three to keep confidence and form up

Not to mention how much fun it wud be to defeat spuds just when they have beaten Utd and think they have turned a corner and are dreaming of top 4. A spud with hope makes for a tastier meal than one without.

The sort of ‘adventurous’ game Sherwood has Spurs playing at the moment may suit Podolski and Walcott on the break. The trick will be to hold solid defensively against their two strikers (should they elect to do so) and be able to hit quickly on the break. Rosicky, Santi and Jack (+Arteta) will have to transition us as quickly as possible and find BOTH Podolski or Walcott as outlets working in tandem (closer to a 4-4-2 for us in that respect) Spurs will likely try and pack in the middle with their surfeit of ‘tall bruising DMs’ (orcs) Thereby our… Read more »

Let’s see. We plays the spuds tomorrow…at the grove…then have nine days rest till the next match…I really do not see why there shouldn’t be a full strength team tomorrow.