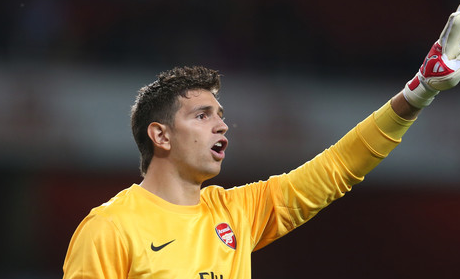 With Wojciech Szczesny tied to a contract until 2018, Arsenal may not, on the face of it, appear to be the most suitable club for a promising young goalkeeper to attempt to break into the first-team.

When you assess the wider picture, however, it may not be too long until an opening emerges for some of the club’s promising young custodians. Lukasz Fabianski’s contract expires in the summer and, barring a dramatic change of events, it seems unlikely that he will usurp Szczesny before the end of the season. At the age of 28, he will surely be seeking regular football elsewhere, whilst Italian shot-stopper Emiliano Viviano has already been linked with a return to his homeland having not featured for the first-team during the first half of his season-long loan at Arsenal.

If both Fabianski and Viviano were to depart at the end of the season, it is likely that an experienced back-up for Szczesny, or maybe even somebody capable of challenging him for the position of first choice goalkeeper, would be acquired.

The position of the club’s third choice goalkeeper would then be available and there are several candidates willing to seize it. The most notable of them, Damian Martinez, today extended his loan spell with Sheffield Wednesday until the end of the season. Martinez, who has already played twice for the Arsenal first-team, has played half of the games that he has been available for at Wednesday, where he has shared the goalkeeping duties with Chris Kirkland. If Martinez was to feature regularly for the Championship side for the rest of the season then he would be in prime position to return to Arsenal in the summer and claim a place in the first-team squad as one of Szczesny’s deputies.

Martinez is not the only promising young goalkeeper on Arsenal’s books, however. Deyan Iliev, a Macedonian U21 international with impressive reflexes, is in his second season at the club and has played every minute of Arsenal’s UEFA Youth League campaign so far. For all his promise, however, Iliev’s kicking does require some work and he is still somewhat error prone as his mistake in last season’s NextGen Series Semi-Final against Chelsea and some of his performances this season have demonstrated.

The goalkeeping hierarchy at youth team level was further complicated by the arrival of Matthew Macey earlier this season. A highly regarded young goalkeeper signed from Bristol Rovers, Macey has been impressive since joining the club and, despite the fact that he is only 19, seems to have a very bright future ahead of him.

All three goalkeepers will no doubt carry with them an extra sense of determination for the remainder of the season given the potential opportunity that awaits them at the end of it, but, at present, Martinez would seem to be in pole position to capitalise.

If fabianski goes I wouldn’t mind seeing an experienced goalkeeper aged 32+ who can fill in when he is needed. Definitely need some serious competition for Szcz though. We’ve all seen hiw adding Viviano to the mix has kept Szcz focused and in form this season

Agree we need to bring on young players in all positions but nothing can count for experience esp in the prem league. Lots of players come and go but keepers must be harder to find the extra quality needed and the pressures it brings

I have only seen Macey played once. Quite commanding at the back but just like Szczesny earlier in his career, his kicking is somehow weak and needs improvement. Hopefully we can see him in the first team in the next a couple of seasons tho.

Meh? Why bother commenting at all if you don’t care?

Santi Caz is Gunning you Down

Is Martinez doing a reverse quenelle in the picture?

Jagger
Reply to  Santi Caz is Gunning you Down

I just don.t get martinez..or any other young gk for that matter can regard as a step to go ffom playing in the championship to being the 3rd choice for a PL team..just look at Butland. Even it.s more money how does that help their development?