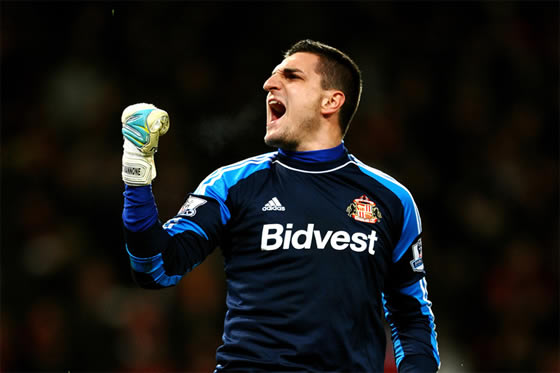 Vito Mannone says he’s looking forward to returning to Arsenal this weekend, having moved to opponents Sunderland in the summer for £2m.

The Italian stopper joined the Gunners as a teenager in 2005, and despite never doing enough to win a regular first team place, generally acquitted himself well when called upon.

He’s having a good run for the Black Cats, and was the hero in their penalty shoot-out with Manchester United last month. Tomorrow will be his first game against Arsenal since leaving.

“It’s another great game to play in, and to have the chance to go back there with a chance to play and be involved in this kind of game is great,” he told Sunderland’s official website.

“I grew up as a player at Arsenal and it will be emotional.”

Mannone was also the subject of praise from Arsene Wenger who aid he was delighted to see the Italian doing so well at Sunderland.

“I kept him here when he made a trial at 16. That he makes a career now, I’m extremely happy for him.

“You know, I had a big problem here – and it’s a nice problem to have – because I had three young keepers and all them three of top quality, with Fabianski, Szczesny and Mannone.

“In the end I let Mannone go because he deserved to play somewhere.”

Still, nice at it is to see him do well, we’d prefer if he kept his performance of the season to next weekend when he can spend his thwarting the might of Man City and winning the Capital One Cup.

Everything is personal. Thats what the old man told me.

come on vito, time to let one slip through your hands for old times sake
we can’t have an old arsenal boy like you cost us points in a title race

Can’t do it Sally

Na, I prefer a Podolski screamer followed by an Ox in the box move. 2-0 to the Arsenal. Let Don Vito have a good game.

He better not celebrate saving a shot or penalty.

Emotional for us too Don Vito. Top lad

always a decent player, nice to see him succeed at Sunderland.

Leave the cannoli, pick the ball out of your net a couple of times Don

Mallu, a Podolski goal would have to be a “screamer”, considering it’ll have to come all the way from the bench.

Wenger must be saving him for DEATHRUN2.

Poldi will get a start tomorrow and score.

He looks like a direct decendant of a Roman Soldier. You just know his ancestors were in the legion. Hehe

Top man, lets give him a proper Welcome. Coyg!

mannone is a winner. set to win the coc this season. but not before picking the ball 5 times from his own net today. COYG!!

Sad to lose him to Sunderland.Sadder to see Fabianski go soon. Just hope there are good replacements.