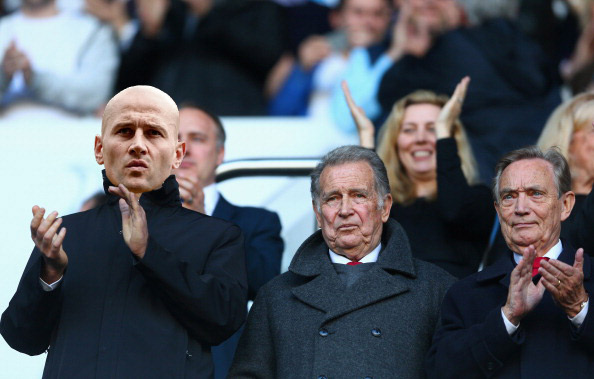 Arsenal are set to add some much needed football expertise to the boardroom with the appointment of Pascal Cygan to a specially created new role.

The Frenchman, on the advice of Arsene Wenger, will be confirmed as the club’s first Strategic Football Consultant. After adding Josh Kroenke to the boardroom last year – the first step in reducing the average age of the directors – the 39 year old former defender will bring another dose of youthful vitality to the Arsenal set-up.

With question marks still over the manager’s intentions, and the board’s ability to make properly informed decisions about the footballing future of the club when Wenger does finally call it a day, the decision was taken to create a new role to bridge that knowledge gap.

Taking into account the suggestions made by fans groups like the Arsenal Supporter’s Trust, Black Scarf Movement and Arsenal Need Another Leader, that they needed somebody who understood the club and was cognisant with the needs of the modern game, a three man shortlist was fashioned after extensive discussion. The names put forward were Patrick Vieira, Dennis Bergkamp and Cygan.

Arsenal, however, were reluctant to ‘poach’ either of the first two candidates from their roles at Man City and Ajax respectively, due to the compensation they’d have to pay, and plumped for Cygan instead. Despite playing a bit-part role in the team for most of his Arsenal career, Wenger was always impressed by his intelligent outlook on the game.

After leaving the Gunners in 2006, he went to Spain to play for Villarreal (alongside Santi Cazorla and Robert Pires) and Cartagena, before retiring in 2011. Since then he’s been doing his coaching badges, and studying at some of Europe’s biggest clubs to gain insight into the way they’re run.

He spent time in Italy and Germany, and undertook a 3 month role at Turkish giants Fenerbache but was forced to cut short his stay there due to an intense allergic reaction to a pesticide used on the grass at their training ground.

Cygan was also recently spotted sitting alongside Ken Friar at a recent game at the Emirates, which led many to wonder if it was more than just a social visit.

The Frenchman’s duties will include compiling a short-list of managerial candidates for the board to consider in the wake of Arsene Wenger’s admission he’d have no hand in that process.

As well as that he’ll be advising on general football matters, transfer policy and training ground improvements – one of which, on the instruction of Stan Kroenke himself, is the installation of a state of the art cryo-homeopathic bath which the American believes can put an end to the repetitive muscle strains suffered by Arsenal players.

The appointment is set to be confirmed by the end of month.

I can’t tell whether this is a joke or real.

That’s how the holiday is celebrated quintessentially. Happy 12am in the UK.

The Photoshop is a dead giveaway. Should’ve just used a pic of Cygan.

April Fool! You ain’t fooling no one

aaah got it. I’m an idiot

Wait a minute, bring me that calendar.

Not sure if serious…

Would’ve been more believable if you did a better job with photoshop.

It is plausible that cygan was a football genius while being an average player, is allergic to certain chemicals and that arsenal are up on some new age shit though. The shopped photo seems to give it away though.

It’s nearly a good bit of photoshop, but his head’s a little big.

That and the pigment of his hands is wrong. Obviously hand pigment doesn’t always match 100%, but it’s obviously off in this case.

Careful you dont pull a gooners leg too hard, I hear were prone to injury

Alan Partridge would be proud of this great banter.

Well played, although our friends in different timezones will probably actually scatch their heads for a while.

Well that’s what I did…

Gunner From Another Mother
Reply to  Mack

Blimey, I must inhabit a timezone of my very own. Even started wondering how a cryo-homeopathic bath transfers its wholesome goodness. Scary really.

Got to say I had my mouth wide opened when I read that, its more less like the emirates sharing news with spurs fling around .what an expensive joke

What a great way to start April fools !

Remember when he scored 2 (!) against Fulham?

I got Viera and Bergkamp, but cygan! What about an true Arsenal legend like Adams!? Etc an Englishman as it’s an English fucking club! Arsene Wenger really does control this club doesn’t he! Ad for the cryo-homeopathic bath…well that’s a good idea, but how about not over playing our fucking players! Fatigue is the highest cause of injuries! So rotate the squad more and buy some world class players in 4 different positions…centre back, defensive midfield, striker and winger.

I better fuck off and support Kaizer Chiefs or Brisbane Roar, then.

Unlucky Chris, it nearly happened to me, too ! 😀

His hat’s fine. It wasn’t even close.

I immediately thought this was weird Lmao. I actually didn’t know the UK did April’s Fool too. Forgive me. Funny stuff

Ok this got me until the cryo-homeopathic bath. That’s not even a thing! 🙂 good one though Blogs.

Which explains the results I got from Google…cold shower? That’s all this fancy thing is? Sigh.

How typical of Wenger. What’s wrong with employing an Englishman Wenger. Hurry up and get back to France Wenger.

Thank You Blogs for exposing such dimwits within our fanbase.

TMAS
Reply to  Will

I’m sure no one thought AW or SAF were great players, but both have done a good job after their playing careers. Lets not judge him on past performances and lets see what he does in his new job. Good luck to him I say.

An excellent idea, and great to have some new faces on the board. Also I understand, just to the left of Pascal is another new prospective board member, Gus Ceasar, sadly out of shot in this photo. In addition I hear that Francis Jeffers was another possible, but unfortuately is unavailabe to to him doing….whatever it is he does these days. Anyways exciting times for the club, great to have these calibre of men involved at an executive level.

But John terry is a cunt whether its April fools or Easter or Xmas or Anything. John Terry will always be a cunt.

I wasn’t buying it, until the part where is said Arsenal decided on their 3rd choice because they didn’t want to have to pay compensation for the other two. After that, I knew it was real.

Nearly had a heart attack til I read the comments….LOL. Totally lost track of the date. And day of the week. It’s 2003, right?

Well I for one welcome our new hailleds overlords …

How come Igors Steponovs wasn’t in the frame?

I really couldn’t tell if you were serious or not without looking at the date.

Cryo-homeopathic! Brilliant!
(Actually, it wouldn’t hurt to try. Desperate times and all that…)
Hope this ‘news’ appears in The Metro. Divs.

This makes too much sense to be true…

It’s 8pm on the East Coast in the US. Therefore this isn’t an April Fools Joke. It’s just a brutal prank that confused the crap out of me.

Good one, blogs! I was just about to google “cryo-homeopathic bath” when I realized…

A) To sign a player.
OR
B) To Deposit large suitcase of cash.

Blogs there are times I truly believe a few bolts are not only loose but permanently lost with no hope of replacing. Thou art hilarious!. Time of post gave it up though…Cygan!!!!. Guaranteed rib cracker. Would like to empty a few pints with you!.

Hahaha this is so well constructed, it’s scary!

this joke believes that it’s the real thing. I love that shit.

I’m at the airport and I started to swear out loud profusely before I realized what day it is. A little embarrassed by all the looks but thoroughly relieved.