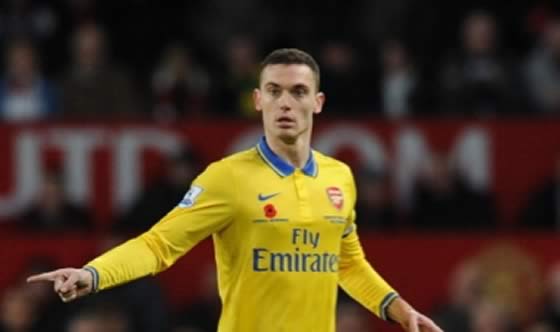 Arsene Wenger has revealed that although everyone who played last week against Norwich is available for the FA Cup final this weekend, there are doubts over the availability of Thomas Vermaelen and Alex Oxlade-Chamberlain.

The club captain is suffering with a knee injury while the England midfielder’s groin problem might keep him out of the Wembley showdown against Hull.

Beyond that, however, the squad is in good shape with the likes of Mesut Ozil, Aaron Ramsey well and truly recovered after their injury absences earlier in the season.

The manager also said that although neutrals will be looking for a shock in Saturday’s final, he wasn’t worried about anything other than winning the cup for the Arsenal fans.

“It’s normal that neutrals want Hull to win,” he said, “But we play for the Arsenal the fans and we want to make them happy.”

Please Vermaelen do NOT come out in your kit and celebrate the trophy!

Don’t know why the dislikes… I’m merely saying I don’t want our captain to be anything like Cunt Terry!

I’d love Vermaelen to lift the cup, him being the Verminator and our captain. So he should go right ahead but I agree if he does it in the full kit not having played, it would be a wanker move. John Terry is a cunt.

Because Terry is a cunt.

Bummer for both to miss out. We should be strong enough without though, Sagna has shown he’s more than capable to cover CB if needs be. Spoilt for options in midfield now too. Confident. Quietly confident..

Feel totally confident for some reason. Was more worried about the Wigan game. Full squad, five good wins under our belt. We’ll do this.

Vermaelens injuries have been bizzare this season rarely plays but still gets a shit load of injuries. is it happening in the bedroom mr.Verminator?

We’re the famous Arsenal and we’re going to Wembley!

She word a yellow ribbon in the Jerry month of may!

Please DO make us very happy…@Wenger!

With Ramsey fit I just can’t see anything but a win. He drives this team on.

What a turn around in the lad eh!?

You could also ensure a win by casting an Imperius Curse on the Hull keeper. Ol’ Voldey old pal.

Just seen on twitter (the most reliable of all sources) that the Ox is training with the lads at Colney… COME ON THE OX! er… well, you know what I mean.

WE’RE THE FAMOUS ARSENAL AND WE’RE OFF TO WEMBELY!!!!

I have been an Arsenal fan ever since I started watching football around 5-6 years ago(I’m 17) and this will be the first time I’ll see my beloved team win a trophy. Even for the rest who were there since before 2005 have longed for this day for 9 years. Let’s go get the trophy! COYG!

In the mean time, enjoy the delights Youtube has to offer of Arsenal trophies past. The team of a decade ago was magic that has not been equalled since, and should be inspiration to all future goons.

I sense we have a strong stable squad maturing nicely and next season we will be getting revenge for this seasons embarrassing pastings.

I hope Rosicky or Podolski or Giroud or Sagna or Ozil score the winning goal. It will make me so happy.

Rosicky and Sagna deserve to win a trophy more than anyone else.

Podolski can prove how vital he is to the squad and stay here.

Giroud for all the undue criticism he has faced, probably won’t be the first choice striker next season.

And finally Ozil, to shut the media up.

For me I’d personally like Rosicky to score the winner the most. Next to him I’d love Wilshere or Jenkinson to as they’re ‘proper gooners’. For Sanga it would be a fitting farewell gift after 8 wonderful years. I’d love Ramsey to score it as well as it would officially announce his arrival to the top echelon of world football. Heck lets have the whole squad score!!

Let’s just have them all score. 5-0 isn’t a bad scoreline.

In less than 100 hours we’ll have won something. If I have sex Saturday night it’s gonna be the best day ever.
A Wank counts

I don’t think I have it in me.

My line up for Saturday :

Pretty close, tho’ I think it could be Fabianski in goal (personally I hope so).

Rosicky, Wilshere and Sanogo (or the Ox if he’s fit) to come on as subs.

Like others I am quietly confident about saturday. Not over-confident, just reassured. I too was more worried about the semi because the squad was really taking a battering back then. I think with Ozil and Ramsey back, with Gibbs hopefully at left back in our regular back 4, that we’ll have too much for them. The squad looks fresh and focussed. No disrespect to Hull, but if we play anything like our best, we should win. I hope it’s convincing because I think the Wenger bashers (without and withing) will be waiting for any semblence of a slip up or… Read more »

Does he still lift the cup if he’s not in the squad? Plus the fact he’ll probably leave in the summer and has therefor played his last game for us..I think Mikel should lift the cup!!

Vermaelen is our captain so he should lift the cup (if we win). I know we will.

For the past two years we have been playing man city in preseason games before the season start. So if we win the FA cup it means we get to play them in the community shield cup. After 9 years of no trophy now we can possibly win two trophies within 3 months

I think all YoungArse was saying is don’t come out in a full kit like Terry did for Chel$ea. It’s totally fine to lift the cup just seriously, who wears their full kit if they are not playing?? – Wanker!

Yeah this is exactly what I’m saying. Of course I want him to lift and celebrate the trophy – he’s still our captain! I just don’t want him to put on the kit for the sake of it!

As an optimist…I’m sighting 2 trophies under three months. First the FA, second is the Community shield. COYG

I really wanted to see Vermaelen lift the trophy :'(

Wouldn’t mind a repeat performance like the one against Napoli in the Champions League at home. Bossed that game like a mother flower.

Best Arsenal performance of the season. Liverpool at home (PL) is up there too.

One thing that makes me confident (right now that is, I’ll be shitting myself on Saturday) is that we’ve got players in this squad who’s won cup finals before. Özil, Poldi, BFG have all won domestic cups in Germany and Spain, and Cazorla has won international tournaments with Spain (albeit he never played in the finals as far as I can remember?). Plus we’ve got some players left from the 09 squad who now has experience from at least one final. That experience should counter any underdog-boost that the Hull players will feel. And obviously our squad is ten times… Read more »

players left from the *2011 squad obviuosly

Trophy is on our side again.

I am 100% confident that……….Wenger will play Fabianski in goal.