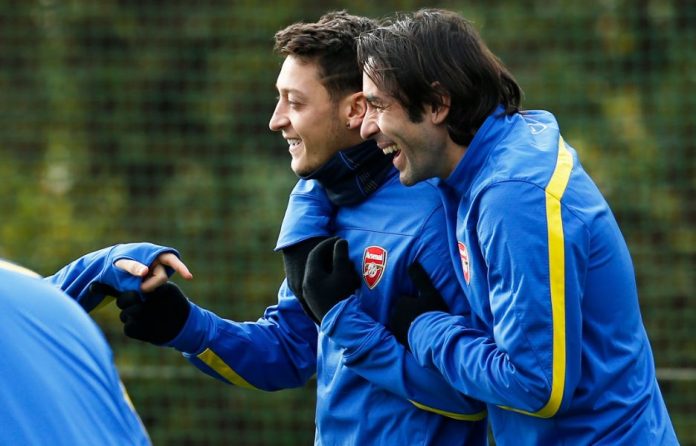 Demi-god Robert Pires has backed Mesut Ozil to build on his encouraging first year at the Emirates claiming it takes up to seven months to acclimatise to life in the Premier League.

Earlier this year Arsene Wenger drew parallels between the two players highlighting that his ‘Invincible’ midfielder had taken a while to assert his genius in England after his £6 million move to Arsenal in 2000.

Despite being burdened by the pressures of a £42.5 million price-tag, Pires – who was voted FWA Player of the Year in 2002 – told the Independent that Ozil will find life easier next term.

“I like Ozil. He is a very good player, with quality. When you come to England, it is very difficult because the football is completely different.

A regular guest at the Gunners first team training sessions, Pires also touched on the future of Arsene Wenger with whom he has maintained a close relationship since leaving for Villarreal in 2006.

“I know Arsene Wenger. Sometimes you need to take your time over a decision. He knows Arsenal, the team, the squad, all the players. He knows he has very good quality.

That’s all well and good Robert but… WHAT DID SHE WEAR?

SHE WORE A YELLOW RIBBON!!

She wore a yellow ribbon in the merry month of May

And if you asked her why the heck she wore it !

I’ve just seen a poll on the Arsenal website asking who will make the difference in the final. 62% said Ramsey and 22% said Ozil. What strikes me about this is that both are in a way “new” players this season. Ozil obviously because we brought him, but Ramsey also in that no one thought he would be such an important player. The point I’m getting at is that despite failing to win the league the club is in a very good position going forward, arguably having the two best midfielders in the league for years to come.

The LANS quote has been ridiculed and I’m taking it somewhat out of context here, but Ramsey’s transformation has absolutely been like a new signing. Like, a world class signing, who is clearly one of the best players in the world in his position, hit the ground running, showed levels of composure and skill and maturity that belied (belay?) his years, steered completely clear of any kind of controversy or distaste, and bar wage didn’t cost a penny.

I.e. the kind of signing the media hates

*I know, Rambo cost 5m, but you know what I mean

I hope so to Bobby. I cant remember exactly where I heard it, but once upon a time Remi Garde linked with us as Wengers successor? Strange how he has declined signing a new deal with Lyon and is walking away?. Is it possible?

a man named “kieth” does not speak like that

I think he’s referred to as “Keeeeeffffffffffff”

Probably spells “Thursday” with an F.

You know what would be a perfect dream scenario? Ozil giving an assist at the 11th minute in the first half and scoring a goal at the 11th minute of the second half. Mesut Ozil, our number 11 winning our 11th FA Cup 😀 ! Keep the Faith! #COYG!!!!

JB
Reply to  Angolan Girl Who Loves The Gunner

And John Terry invades the pitch in the 89th minute (because, you know, er, he’s a cunt), gets rugby tackled by Flamini, rips open his sack and reveals that he is, in fact, an alien from planet cunt-twat. And therefore all trophies won by him are null and void and must be returned.

“A regular guest at the Gunners first team training sessions …”

It just occurred to me – Pires has not made any official announcement on his retirement, or has he?

For the past two years we have been playing man city in preseason games before the season start. So if we win the FA cup it means we get to play them in the community shield cup. After 9 years of no trophy now we can possibly win two trophies within 3 months

Dont know about anyone else but im buzzin already. Not excited much 😉
Also it says a lot when sime of your best players come back to train. True Gooners!

The transformation of Ramsey this season is beyond comprehension. He’s turned into a super machine capable of ochestrating exploits onb the pitch. Ozil-Ramsey-Giroud(Better Striker) would be the best trio in the world few years to come

With Ozil and Ramsey in the team for Saturday my usual Arsenal anxiety is eased. We saw how much we missed him in March and he’s only going to get better. On the subject of massive signings I’m surprised Real Madrid haven’t been getting much flack since they lost 2 – 0 at the weekend and so can’t win the league. They have not one but two most expensive players ever and they still can’t win their domestic league!!

Umm it may be due to the fact that they’re in the final of the Champions League.

Ozil.. You Lucky son of gun.. Having Pires all over me like that.. Oh what I wouldn’t give. *Slips into daydream*

“I think he will stay next season” Only next season? Could Remi Garde be coming for a year to settle in before Arsene leaves?

£6 million, it never ceases to amaze me that you could get almost 4 Pires’ for 1 Phil Jones. He is a legend.

The excitement levels are reaching fever pitch, its only Wednesday and I have butterflies thinking about this game.

I have a ticket……………………………………….
for the big screening at the Emirates, followed by an after party at Modhabobo’s house!
COME ON YOU GUNNERS!

I try not to think about Saturday, otherwise people around me ask why I am smiling from ear to ear at a bank desk. They also wonder if I’m up to something.

What about ljungberg, i fkin miss ljungberg abd his red hair!

Apparently Sp*rs are so confident of signing Mauricio Pochettino that they’re already looking for his replacement.

I have been doing some research and If we take the numbers from the last 5 seasons of the clubs that have been in the top 4 and take the ins and outs of the transfers that has been paid we get the following numbers. When we have a negative number (-) this indicates that a team has spent more on transfers than they have received in transfer fees. When you see a positive number (+) it means that they have received more than they have spent. Club Money spend in total Man City – £395.000.000 Chelsea – £305.000.000 Man… Read more »

Nice. It realy annoys when the so called pundits compare Arsenals spending to that of Loserpool, and claim its similar. First of all we didn’t spend £35mill on a dud like Carrol, or their other over-rated English players.

Dude, you just ripped this lock, stock and barrel from the untold Arsenal site. If you’re re-use someone else’s work you could at least give them some credit:

I write as a pseudo

Rossi, one of my favourite memories is after the “It’s only Ray Parlour” 02 final, singing that for about an hour in the stands with a few thousand other Gooners. Good times.

I want us to win the FA Cup and Charlie Adam to get castrated by Abou Diaby.

If John Terry comes to Wembley on Saturday, there’s a big chance he’ll have his full kits under his clothing.
Wouldn’t be remiss to keep some distance between him and the cup as TV5 will surely look awkward struggling with the cunt to lift up the cup.
Just saying.

Freddie is working for the club! He’s just been on a promo tour to China, doing training sessions and the like