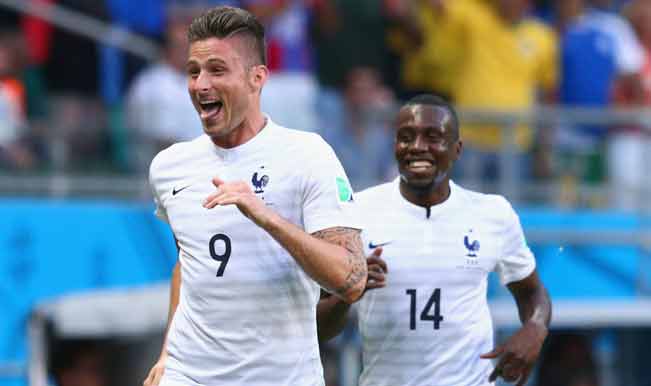 Olivier Giroud says he’s haunted by missed goal scoring opportunities and revealed that Arsene Wenger is pushing him to be more sly in and around the penalty box.

The striker, who scored his first World Cup goal for France in the 5-2 hammering of Switzerland, earned plaudits for the impact he made in Salvador on Friday but believes he’s still got areas of his game to improve.

Pinpointing a squandered opportunity against Chelsea that would have given the Gunners an early lead at Stamford Bridge in a game they went on to lose 6-0, the Frenchman told L’Equipe (translation by @MattSpiro):

“I have to do better in the big games and I’m working on it. I still think about those misses against Chelsea.

“I often look back at my mistakes with Arsene Wenger. He says I have to improve my finishing and my movement. He wants me to make smarter runs.

“One day Wenger told me I’m too honest in my running, too predictable. I need to be more sly, tricky. I’m getting there.”

Giroud’s goal against the Swiss – a towering header from a corner that gave his country the lead – was his ninth goal in 32 appearances since making his debut for Les Bleus just over two years ago. A landmark moment in his career, the 27-year-old reflected that he’ll forever cherish making his mark in such a showpiece spectacle.

“It’s something that will stay with me throughout my career. When you score, you think about your loved ones, about your family. It’s a very special moment; it’s unique.

“It represents the aggregate of a whole career and it’s great to feel that fulfilment and to have played an active role in the result. I wasn’t aware that it was France’s 100th World Cup goal – I only found out after the match.”

Asked if the strike represented ‘revenge’ having missed out on a starting berth in the first game despite a positive impact during France’s World Cup warm-up games he continued:

“I don’t really like the word ‘revenge’. I would prefer to say it was a personal victory. The course of my career has been atypical, just like Franck Ribéry, Mathieu Valbuena and Laurent Koscielny. When I was 17, success in my career was far from a foregone conclusion. I’ve come a very long way to get here.”

He certainly has. Good on him.

That run he made before assisted Valbuena’s goal was amazing. Never thought he can run that fast.

Hope to see that kind of run again next season

The Panther
Reply to  Young Gooner

I think that is what you get from good competition for a place in the team. He was angry that Benzema had started the first match and scored two, he was desperate to prove Deschamps wrong and show his quality. I hope Arsene shares my sentiments

squiggle
Reply to  The Panther

I don’t think competition for places is as important as peope think it is. They’re professionals trying to do their best. Now and again it might help them to up their game in a Lennon/McCartney, Jagger/Richards friendly rivalry sort of way but they’re seldom complacent.

I agree it has nothing to do with competition, if anything Giroud seems to try too hard. I think he benefited from being used sparingly by Deschamps, I don’t think he’s the type of guy with the fitness to play 90 min week in and week out.

some players do, but yes, they are not the norm and they are exceptional… thierry henry comes to mind

‘Some players’. Messi and Ronaldo. That’s why they are the very best.

is there an echo in here?

An improved Giroud is Arsenal’s gain!!

This & a capable strike partner, will hopefully make us genuine contenders next season (ofcourse along with other necessary improvements to the squad).

Some nice comments there from the HFB. Whether he’s good enough or not to be Arsenal’s front man in the years to come he has certainly come a long way as a player, good on him.

To the tune of “We’re all living in a yellow submarine”:

We’re all cheering for the Cunning Kangiroud!

Atletico Islington
Reply to  The only Olivier is Giroud

Arsepedant
Reply to  The only Olivier is Giroud

Actually I though it was rather good.

Cue a personal record for thumbs down now.

It was great to read that Wenger has talked to him about his movement and positioning in the opponents penalty area. This has been the weakness in his game and if he improves it then I am confident he can get 30 goals a season.

The Panther
Reply to  Joeos

joeos
Reply to  The Panther

In his first away game at Stoke both Huth and Shawcross were constantly complaining to the referee about the roughing up he was giving them. In the same game Pulis was jumping up and down on the touchline complaining to the 4th official and the referee about Giroud’s physicality. The other evening that well known Chelsea lover, Pat Nevin, was waxing lyrical about Giroud describing him as unplayable. Like many other players he can fall down when he believes he can win a freekick.

Mpls
Reply to  The Panther

Panther, you’re perpetuating a total untruth that should have gone away long ago about Giroud’s physicality. Watch closely when he plays all of the roughing that happens when he does not get knocked down and BEFORE he is actually on the ground. No, he should not miss opportunities because if appeals to the ref, but if he gets kicked over and never gets the foul there is a problem. Show me a striker in the EPL that doesn’t complain when they get serially fouled and I’ll show you someone who is not very bright. Sad fact is the only way… Read more »

Black Hei
Reply to  The Panther

I remember a certain Matt Hummels bouncing off OG and falling like a toddler.

Is it just me or does anyone agree That Oliver plays better with a Strike partner?

I loved the way the final changed when we brought on Sanogo. Really hoping to see more of it…

He’s not very good at being sly otherwise he wouldn’t have been caught out in that hotel room.

Being serious now 30 goals minimum next season for the big man.

Well, it seems quite a lot of mates are with me.
Seems you are the one who’s alone with your thoughts though!

Giroud’s reported comments provide an interesting insight into Arsene as coach, and how he seeks to
improve players, whatever age and stage of their career they may be at.

I’d love to read a book by Arsene about the coaching, development and management of players.

I think every other manager would as well, it’d be like a cheat sheet

I really hope he does write one someday. Much much more than just the football world would benefit.

Chapters 1-32: Maximizing Potential vs Spending Oil Money to Cover for Lack of Vision.
Chapter 33: Two fingers for the haters.

Chapter 33 could be as long as the other 32 put together.

For once, I wouldn’t mind to buy the hardcover as well as an audiobook. Wenger’s got the one most soothing voice of all people involved in public speaking, but “above all”, it got content that’s just worth it.

We are certainly getting another striker. These are the words of a man gearing up for a fight. We are in for an interesting season ahead. I see a trophy (not community shield) or two. Keep the faith.

I haven’t ever been so confused listening to a game as I was by Giroud vs Djourou.

@Merlin’s Panini does anyone remember the 7-5 at Reading when Giroud scored and the cameras just showed Djourou jogging back to the centre-circle?

Ha, oh yeah, I remember that. You have a very good memory. Chamakh scored a beauty in that game too as I recall.

No wonder you remember that. Rarest of rare occasions.

He needs to work on his speed and timing
A world class striker partner like Benzema would bring the best out of him!

I don’t think Benzema is suited to premiership football. He’s well suited to La Liga and the slow-slow-slow-explode-slow etc etc of Spain/Italy but would get the lazy reputation of Arshavin by rarely chasing back in the PL. He did do one impressive chase back yesterday but that’s pretty much the first time I’ve ever seen it (I’ve seen Arshavin chase back much more often).
In the unlikely event that he does come to us (or a PL competitor) I may be proved wrong, but I doubt it.

Squiggle
Competition is one of the biggest factors in football

Small and pacey striker is what we need to complement Giroud, “Suarez esque” … But WHO THE HELL IS OUT THERE TO BUY !!????? .. And please, be realistic !

Zorro in the box
Reply to  Merlin's Panini

EXCLUSIVE from Goal.com suggests that Chelsea have “triggered” his release clause. They are now in a bidding war with Manchester Utd and Juventus although Barcelona may “swoop” for him.

Burak
Reply to  Zorro in the box

Darn. I’d already posted this to reddit before reading the last part.

Pedro, I’ve always loved him. He’s fast,clinical and can play anywhere across the attack. Barca also seem to be on a selling spree at the moment and he’s purportedly meeting with Zubizaretta.

Joel Campbell would do well next to Giroud.

Hope Wenger pulls something out the bag after rejecting Fabregas!

Can’t believe he didn’t realise he was makin shit runs all the time. I remember in every single game, whenever someone was about to cross the ball, he always ran to the near post. Never did I see him stoppin and maybe take a step back and then run again or run to the back post but glad he’s realised it now and hopefully we’ll see a better player next season

He is strongest on the near post but I guess you don’t see him often if you’ve “Never seen him” move elsewhere.

Only HFB would make a white shirt with a cockerel badge look good.

I love Giroud’s work ethic, which is such a contrast with his “pretty boy” image off the pitch. From a footballing perspective he seems to have had to work for everything he’s got, and so he relishes learning and improving more. He’s a very underrated player already, and it’s exciting to think that we haven’t seen his best over the course of a season as of yet.

@Mr White: Giroud’s first goal vs Everton in the FA Cup. As I remember it he had Stones on a string, pulling him into a position he should never have been in, and made it easy for Sagna to find him. Giroud’s problems are not to do with finding opportunities. His movement is excellent. The problem is converting them.

Btw, thanks Blogs for skipping the South Korea v Algeria game. Not the 4-4 you promised but a cracker non the less

After what I have seen today I hope the striker to compete with Giroud is not Balotelli. Poor attitude. Meanwhile Aurier. seems like the real deal.

Still average, nothing changes that. Wouldn’t get into any of the top 4 first 11. Stop cuddling him, benz is much better and i would take him over giroud.