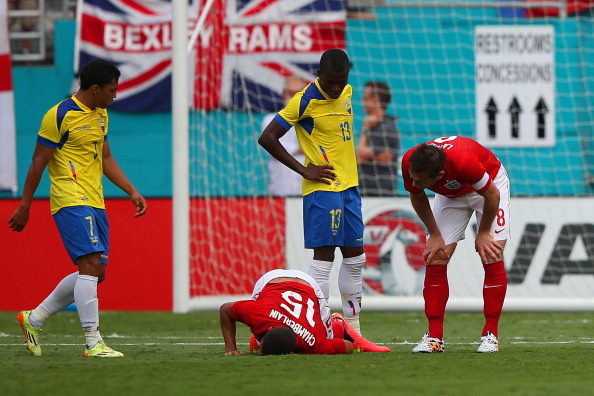 Alex Oxlade-Chamberlain’s World Cup hopes are hanging in the balance after picking up an injury during England’s friendly with Ecuador this evening.

The game finished 2-2 but there were concerns over the Arsenal winger as he was forced off in second half with Roy Hodgson admitting afterwards that he was concerned the injury might be serious.

“We have our fears there might be some ligament damage,” he said. Obviously this would be bad news for England but basically who cares about England?

The issue is how it affects Arsenal and having suffered a cruciate knee injury on the opening day of last season and missed 5 months of football, it would be a big blow if he had to endure another prolonged period on the sidelines.

The first Arsenal World Cup injury of the summer. No doubt there’ll be more to come.

Available for what exactly? Some more car bonking?

This day just got harsh in a flash..

How do you infer that from Gazids’ comments?

Is Wilshere injured? I haven’t heard of this. If this case is true, is it serious, and what kind of injury is it?

I don’t think it’s serious, but he hobbled off and got replaced by Lallana.

would seriously doubt that pique would spill the beans on fabregas. was probably joking.

me me
Reply to  ARiddlingName

what was gladiz quoted saying?????? that says we wont be signing cesc @ ARiddlingname

I saw the video of Pique and Del Bosque chatting, they were having what was supposed to be a private conversation just before a press conference with the mics all set up. I’m sure Pique was just having a giggle, there’s no way he’d be dumb enough to be talking about it with a live mic nearby. And even if he is that dumb, Del Bosque certainly isn’t. I wouldn’t take that conversation as truth.

The inward movement of the knee is typical ACL territory. Back in March

more typical of the medial co-lateral ligament. Theo was stretchered off, I did my ACL and was carried off too. Ox walked off and after his rehab is knees are a lot stronger. You can’t walk by yourself with a bad ACL

I’ve completely ruptured my ACL twice and both times I got up and walked. The second one happened 5 minutes into a game and i played on the next 85.
Doesnt necassarily mean anything.
Could be ACL could be a sprain.

*Praying to Lord Bergkamp its the latter*

Haha mate how can you infer that from a video!?

Obviously this is bad news!

Searching for a silver lining – maybe opens up the need for Cesc!

Typical and so disappointing. Get well soon Ox, we’ll see you destroying defenders on a regular basis soon enough.

Be a devastating blow for the Ox if he has to muss the WC and be sidelined for a period..really hope it’s minor

the patron saint of healing

Poor ox chambo has been so unlucky with injuries. Always when he’s playing well in a game too. Let’s hope it’s just some bruising. But as we all know, its never just bruising for our fellas. Good luck ox.

Dad turns on telly at 10:15pm after having fallen asleep putting the 2yr old to bed.

I’m hoping for minor/incomplete tear. 8 week Rehab and scoring hatrick in the Charity Sheild (with assists from Santi, Ozil and Cesc …)

I’m hoping for no injury…

He’ll be passing Theo on the hypothetical injury-moving-escalator, with Ox going down and Theo coming up, and as they pass, they’re like “motherfu**ing Terry…”

Toss. Hope the lad is alright, he was one of the few players that did not bore my socks off tonight. I care far more about Arsenal than England, if he is out for a month but back for Arsenal nicely rested I will be happy.

Fuck England and WC, get him fit for next season !!! Same goes for Walcott and Wilshere !

@Nubi Im assuming you’re not english so please refrain from saying annoying selfish shit like that. If you said that to OX Theo or Wilshere i dont think theyd be happy as theyd all love to be at the WC. its the greatest sport competition in the world but, oh, you dont support england and/or the WC so yeah lets just satisfy what you want yeah?

I actually doubt it would be the ACL – more likely to be medial ligaments than cruciate with that kind of movement of the knee. Done it myself – hurts like a bastard when you do it, but usually not so serious as a cruciate. But even stretching the medial ligaments can keep you out for a few weeks, so his involvement in the WC looks a bit iffy. Let’s hope he’s at least back for the start of next season.

Not really helped by a pretty dirty retaliation from the Ecuador player. Ridiculously feisty friendly, that one.

Hangeland on a free anyone?

He’s a decent player (Hangeland), but I’d rather have somebody else. If Kos was injured, Mert and Hangeland with a high line would make me very worried. Somebody should draw up a team of the consistently Arsenal-linked XI, which Hangeland would be a part of for sure. Frey, Samba, Dann, Hangeland, Kalou, Cesar, who else?

Yep. Got it. Because an Arsenal player being knackered in a friendly is such a huge surprise to us all.

Why can’t the injury gods f*ck off and bother someone else for a change?

Last night I had a dream where Aaron Ramsey had a twin brother who was just as good Aaron, but played as a right back, Aaron talked him into signing for free since he had no club and he took the number 2, but then his leg was broken by a zookeeper’s transport van driven by Wayne Rooney, who was giving Amaury Bischoff a tour of London manholes in the road because he wanted to build a home in one and everybody went down in one where there was a bunch of pole dancers with amazing bodies but they turned… Read more »

Time to stop our players playing in international friendlies full stop, United have done it for years and it’s time for us to do the same

Its a world cup warm up! If it was a meaningless friendly I would say you have a point, but its a game played 10 days before the world cup kicks off – the friendlies are needed to sharpen up the squad.

Basically a long winded way of saying your post was full of pish.

It’s still a meaningless friendly, world cup warm up or not

Disagree. These games are needed to assess the squad you have before a major tournament. Therefore they have a meaning and a purpose to them.

Playing someone like San Marino in a friendly a week in to the new season – that is meaningless.

Match fitness takes 2 or 3 games. The season ended nearly 3 weeks ago, and the WC is still a few days away. A couple of games are needed to keep the players match fit. That is their purpose.

Come on give the boy a break lord almighty!

Hope he is OK. He is exactly the type of player England need if they are to progress past the groups.

Putting club and country thing aside. Really gutted for the player. Every player and fan would dream of playing in a WC!

….and ppl already hoping for him to be fit for preseason, have a bit of humanity and hope the player can still fulfil his dream of playing in the WC!

With a decent run he will be such a good player. He seems like such a lovely guy too, hope it’s not as bad as feared. A good World Cup would stand him in good stead for us next season.

The way the knee bent in slowmotion made it look really nasty. But everything looks worse in slowmotion so hopefully it wasn’t as bad as it looked.

On another note: the way the photo is taken makes his foot look really long and I find that funny I do.

You’re right it does, haha!

It really is ALWAYS our fucking players isn’t it? If he’s out of the World Cup and if Jack is in trouble too I can’t be fucked with watching England. Fucking shower of cunts, the rest of them.

I care about England… from June til July anyway

Daft Aider that was a daft statement last I checked Rooney plays for manure!!

For Arsenal fans who are not English, like myself, our players who are continually injured playing for England is a fucking joke and a constant source of frustration. I would not mind if it was in important games that mean something but invariably it is in matches just like last nights. Fuck sake.

I couldn’t care less about England, but this is sad news even if he’s back to have a full preseason with us. He must be devastated to get injured one week before his first world cup.
What is it with Arsenal players getting injured playing with England?

This is exceedingly selfish of me, but I hope this keeps him out of the England squad for the entire WC and he can enjoy some time off before joining Arsenal pre-season.

I might agree, in part, but I think that the confidence of playing in and possibly being an integral part of, the England WC campaign woud only benefit AOC and therefore Arsenal next season. Imagine if he comes home having been one of the stand-out England palyers, or even of the tournament, aside from all the transfer bollocks that would inevitably haunt us in the proceeding summers, from that classless Catalan side no doubt . . . he would truly be able to step-up in the EPL as a senior player and hold his own and being one of the… Read more »

I agree about the confidence issue – and lets not forget, he hardly played last season so could probably do with playing in this tournament to get his fitness levels up ready for a decent pre-season

There has to be a reason to why our players are so brittle!!!

You do realise he didnt just twang himself whilst walking along? The guy was taken out in a clumsy challenge and a bit of naughtiness after.

Does anybody have a link to a video of the injury? Thanks

This is the height of laziness.

Do you have a link to the Ox injury article on Arseblog? : )

The color commentator for the US feed, Ian Joy, was quick to point out with seeming optimism, “Fortunately, that’s his other knee!” as he was limping off.

Hopefully they’ll find a real scanner for The Ox’s knee, not that cheap Playskool My First Scanner! that claimed that Wilshere was fine after that other friendly. Yet to be proven is whether England uses the basic Playskool scanner with two settings, “Okey Dokey” and “Better Call The Sawbones!” or the Deluxe version, which is really just a Magic 8-Ball made to look like a scanner.

” Yet to be proven is whether England uses the basic Playskool scanner with two settings, “Okey Dokey” and “Better Call The Sawbones!” ”

@ Biggles : That did make me laugh ! I think I might have woken up the neighbours dog !

I care about England.